Cytoplasmic male sterility (CMS) has always aroused interest among researchers and breeders, being a valuable resource widely exploited not only to breed F1 hybrid varieties but also to investigate genes that control stamen and pollen development. With the aim of identifying candidate genes for CMS in fennel, we adopted an effective strategy relying on the comparison between mitochondrial genomes (mtDNA) of both fertile and sterile genotypes. mtDNA raw reads derived from a CMS genotype were assembled in a single molecule (296,483 bp), while a draft mtDNA assembly (166,124 nucleotides, 94 contigs) was performed using male fertile sample (MF) sequences. From their annotation and alignment, two atp6-like sequences were identified. atp6−, the putative mutant copy with a 300 bp truncation at the 5’-end, was found only in the mtDNA of CMS samples, while the wild type copy (atp6+) was detected only in the MF mtDNA. Further analyses (i.e., reads mapping and Sanger sequencing), revealed an atp6+ copy also in CMS samples, probably in the nuclear DNA. However, qPCRs performed on different tissues proved that, despite its availability, atp6+ is expressed only in MF samples, while apt6− mRNA was always detected in CMS individuals. In the light of these findings, the energy deficiency model could explain the pollen deficiency observed in male sterile flower. atp6− could represent a gene whose mRNA is translated into a not-fully functional protein leading to suboptimal ATP production that guarantees essential cellular processes but not a high energy demand process such as pollen development. Our study provides novel insights into the fennel mtDNA genome and its atp6 genes, and paves the way for further studies aimed at understanding their functional roles in the determination of male sterility. View Full-Text
Keywords: male sterility; ATP synthase; mtDNA; organelle assembly; energy deficiency model; F1 hybrid breeding; pollen; marker-assisted selection male sterility; ATP synthase; mtDNA; organelle assembly; energy deficiency model; F1 hybrid breeding; pollen; marker-assisted selection
►▼ Show Figures 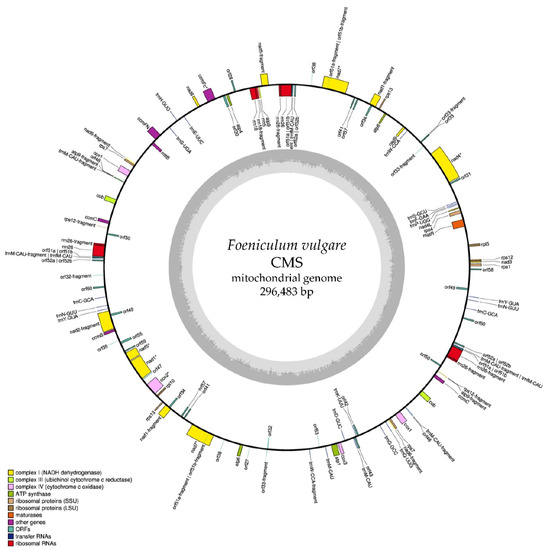