Polyploidization is a frequent phenomenon in plants, which entails the increase from one generation to the next by multiples of the haploid number of chromosomes. While tetraploidization is arguably the most common and stable outcome of polyploidization, over evolutionary time triploids often constitute only a transient phase, or a “triploid bridge”, between diploid and tetraploid levels. In this study, we reconstructed in a robust phylogenomic and statistical framework the evolutionary history of polyploidization in Arundo, a small genus from the Poaceae family with promising biomass, bioenergy and phytoremediation species. Through the obtainment of 10 novel leaf transcriptomes for Arundo and outgroup species, our results prove that recurrent demiduplication has likely been a major driver of evolution in this species-poor genus. Molecular dating further demonstrates that the species originating by demiduplication stalled in the “triploid bridge” for evolutionary times in the order of millions of years without undergoing tetratploidization. Nevertheless, we found signatures of molecular evolution highlighting some of the processes that accompanied the genus radiation. Our results clarify the complex nature of Arundo evolution and are valuable for future gene functional validation as well as reverse and comparative genomics efforts in the Arundo genus and other Arundinoideae. View Full-Text
Keywords: Arundo genus; chromosome number evolution; adaptive evolution; phylogenomics; molecular dating; polyplodization Arundo genus; chromosome number evolution; adaptive evolution; phylogenomics; molecular dating; polyplodization
►▼ Show Figures 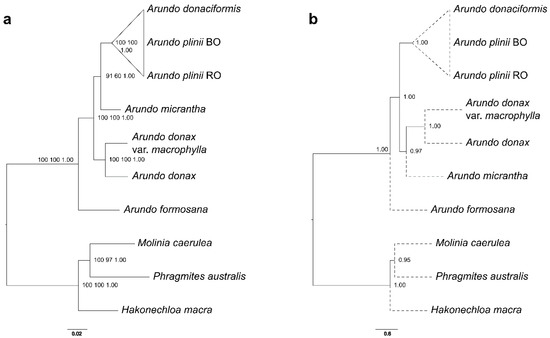