Combination of Linkage Mapping, GWAS, and GP to Dissect the Genetic Basis of Common Rust Resistance in Tropical Maize Germplasm
Next Article in Special Issue

Comparative Evaluation of the Clinical Efficacy of PRP-Therapy, Minoxidil, and Their Combination with Immunohistochemical Study of the Dynamics of Cell Proliferation in the Treatment of Men with Androgenetic Alopecia
Previous Article in Special Issue

Aflatoxin B1 (AFB1) is a mycotoxin widely distributed in a variety of food commodities and exhibits strong toxicity toward multiple tissues and organs. However, little is known about its neurotoxicity and the associated mechanism. In this study, we observed that brain integrity was markedly damaged in mice after intragastric administration of AFB1 (300 μg/kg/day for 30 days). The toxicity of AFB1 on neuronal cells and the underlying mechanisms were then investigated in the neuroblastoma cell line IMR-32. A cell viability assay showed that the IC50 values of AFB1 on IMR-32 cells were 6.18 μg/mL and 5.87 μg/mL after treatment for 24 h and 48 h, respectively. ROS levels in IMR-32 cells increased significantly in a time- and AFB1 concentration-dependent manner, which was associated with the upregulation of NOX2, and downregulation of OXR1, SOD1, and SOD2. Substantial DNA damage associated with the downregulation of PARP1, BRCA2, and RAD51 was also observed. Furthermore, AFB1 significantly induced S-phase arrest, which is associated with the upregulation of CDKN1A, CDKN2C, and CDKN2D. Finally, AFB1 induced apoptosis involving CASP3 and BAX. Taken together, AFB1 manifests a wide range of cytotoxicity on neuronal cells including ROS accumulation, DNA damage, S-phase arrest, and apoptosis—all of which are key factors for understanding the neurotoxicology of AFB1. View Full-Text
Keywords: aflatoxin B1; neurotoxicity; reactive oxygen species; DNA damage; cell cycle arrest; apoptosis aflatoxin B1; neurotoxicity; reactive oxygen species; DNA damage; cell cycle arrest; apoptosis
►▼ Show Figures 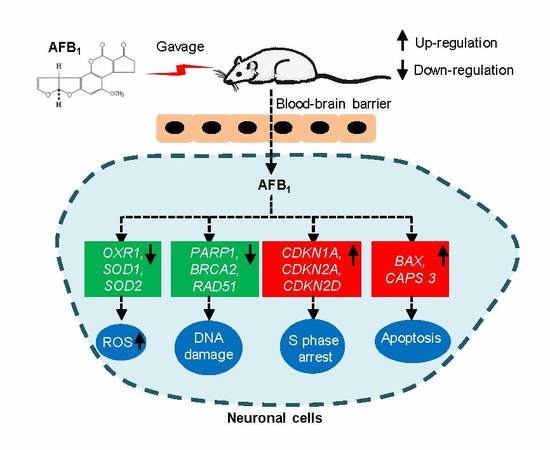