Mitochondrial injury has recently been implicated in the pathogenesis of glucocorticoid-induced osteonecrosis. Using cultured osteocytes and a rabbit model, we investigated the possibility that taurine (TAU), which is known to play a role in the preservation of mitochondrial function, might also prevent the development of osteonecrosis. To reduplicate the intraosseous environment seen in glucocorticoid-induced osteonecrosis, dexamethasone (Dex) was added to MLO-Y4 cultured in 1% hypoxia (H-D stress environment). An in vitro study was conducted in which changes in mitochondrial transcription factor A (TFAM), a marker of mitochondrial function, and ATP5A produced by mitochondria, induced by the presence/absence of taurine addition were measured. To confirm the effect of taurine in vivo, 15 Japanese White rabbits were administered methylprednisolone (MP) 20 mg/kg as a single injection into the gluteus muscle (MP+/TAU− group), while for 5 consecutive days from the day of MP administration, taurine 100 mg/kg was administered to 15 animals (MP+/TAU+ group). As a control 15 untreated rabbits were also studied. The rabbits in each of the groups were sacrificed on the 14th day after glucocorticoid administration, and the bilateral femora were harvested. Histopathologically, the incidence of osteonecrosis was quantified immunohistochemically by quantifying TFAM and ATP5A expression. In the rabbits exposed to an H-D stress environment and in MP+/TAU− group, TFAM and ATP5A expression markedly decreased. With addition of taurine in the in vitro and in vivo studies, the expression of TFAM and ATP5A was somewhat decreased as compared with Dex−/hypoxia− or MP−/TAU− group, while improvement was noted as compared with Dex+/hypoxia+ or MP+/TAU− group. In rabbits, the incidence of osteonecrosis was 80% in MP+/TAU− group, in contrast to 20% in the taurine administered group (MP+/TAU+), representing a significant decrease. Since taurine was documented to exert a protective effect on mitochondrial function by inhibiting the mitochondrial dysfunction associated with glucocorticoid administration, we speculated that it might also indirectly help to prevent the development of osteonecrosis in this context. Since taurine is already being used clinically, we considered that its clinical application would also likely be smooth. View Full-Text
Keywords: osteonecrosis; taurine; mitochondrial function; glucocorticoid osteonecrosis; taurine; mitochondrial function; glucocorticoid
►▼ Show Figures 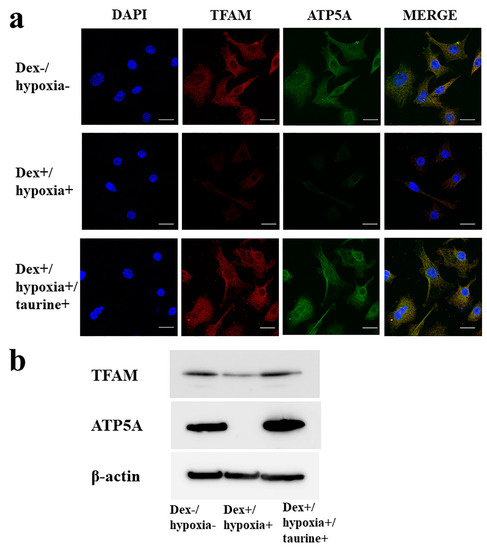