Fabry disease, an X-linked recessive lysosomal disease, results from mutations in the GLA gene encoding lysosomal α-galactosidase A (α-Gal A). Due to these mutations, there is accumulation of globotriaosylceramide (GL-3) in plasma and in a wide range of cells throughout the body. Like other lysosomal enzymes, α-Gal A is synthesized on endoplasmic reticulum (ER) bound polyribosomes, and upon entry into the ER it undergoes glycosylation and folding. It was previously suggested that α-Gal A variants are recognized as misfolded in the ER and undergo ER-associated degradation (ERAD). In the present study, we used Drosophila melanogaster to model misfolding of α-Gal A mutants. We did so by creating transgenic flies expressing mutant α-Gal A variants and assessing development of ER stress, activation of the ER stress response and their relief with a known α-Gal A chaperone, migalastat. Our results showed that the A156V and the A285D α-Gal A mutants underwent ER retention, which led to activation of unfolded protein response (UPR) and ERAD. UPR could be alleviated by migalastat. When expressed in the fly’s dopaminergic cells, misfolding of α-Gal A and UPR activation led to death of these cells and to a shorter life span, which could be improved, in a mutation-dependent manner, by migalastat. View Full-Text
Keywords: Fabry disease 1; misfolding 2; UPR 3; ERAD 4; migalastat 5 Fabry disease 1; misfolding 2; UPR 3; ERAD 4; migalastat 5
►▼ Show Figures 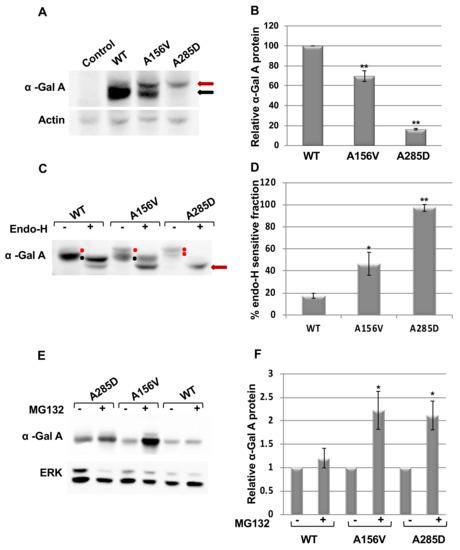