Huntington’s disease is a rare neurodegenerative disease caused by a cytosine–adenine–guanine (CAG) trinucleotide expansion in the Huntingtin (HTT) gene. Although Huntington’s disease (HD) is well studied, the pathophysiological mechanisms, genes and metabolites involved in HD remain poorly understood. Systems bioinformatics can reveal synergistic relationships among different omics levels and enables the integration of biological data. It allows for the overall understanding of biological mechanisms, pathways, genes and metabolites involved in HD. The purpose of this study was to identify the differentially expressed genes (DEGs), pathways and metabolites as well as observe how these biological terms differ between the pre-symptomatic and symptomatic HD stages. A publicly available dataset from the Gene Expression Omnibus (GEO) was analyzed to obtain the DEGs for each HD stage, and gene co-expression networks were obtained for each HD stage. Network rewiring, highlights the nodes that change most their connectivity with their neighbors and infers their possible implication in the transition between different states. The CACNA1I gene was the mostly highly rewired node among pre-symptomatic and symptomatic HD network. Furthermore, we identified AF198444 to be common between the rewired genes and DEGs of symptomatic HD. CNTN6, DEK, LTN1, MST4, ZFYVE16, CEP135, DCAKD, MAP4K3, NUPL1 and RBM15 between the DEGs of pre-symptomatic and DEGs of symptomatic HD and CACNA1I, DNAJB14, EPS8L3, HSDL2, SNRPD3, SOX12, ACLY, ATF2, BAG5, ERBB4, FOCAD, GRAMD1C, LIN7C, MIR22, MTHFR, NABP1, NRG2, OTC, PRAMEF12, SLC30A10, STAG2 and Y16709 between the rewired genes and DEGs of pre-symptomatic HD. The proteins encoded by these genes are involved in various biological pathways such as phosphatidylinositol-4,5-bisphosphate 3-kinase activity, cAMP response element-binding protein binding, protein tyrosine kinase activity, voltage-gated calcium channel activity, ubiquitin protein ligase activity, adenosine triphosphate (ATP) binding, and protein serine/threonine kinase. Additionally, prominent molecular pathways for each HD stage were then obtained, and metabolites related to each pathway for both disease stages were identified. The transforming growth factor beta (TGF-β) signaling (pre-symptomatic and symptomatic stages of the disease), calcium (Ca2+) signaling (pre-symptomatic), dopaminergic synapse pathway (symptomatic HD patients) and Hippo signaling (pre-symptomatic) pathways were identified. The in silico metabolites we identified include Ca2+, inositol 1,4,5-trisphosphate, sphingosine 1-phosphate, dopamine, homovanillate and L-tyrosine. The genes, pathways and metabolites identified for each HD stage can provide a better understanding of the mechanisms that become altered in each disease stage. Our results can guide the development of therapies that may target the altered genes and metabolites of the perturbed pathways, leading to an improvement in clinical symptoms and hopefully a delay in the age of onset. View Full-Text
Keywords: huntington’s disease; systems bioinformatics; pathways; metabolites; gene co-expression; network biology; differentially expressed genes; network rewiring huntington’s disease; systems bioinformatics; pathways; metabolites; gene co-expression; network biology; differentially expressed genes; network rewiring
►▼ Show Figures 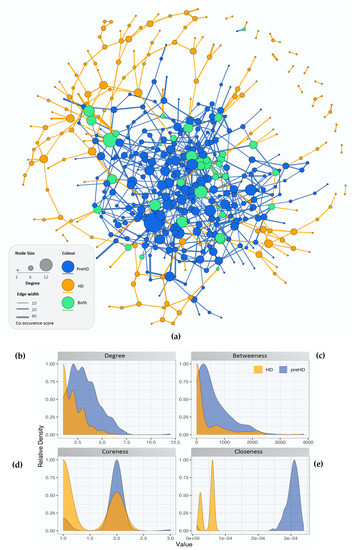