Lipoprotein lipase (LPL) is a key enzyme in lipid and lipoprotein metabolism. The canonical role of LPL involves the hydrolysis of triglyceride-rich lipoproteins for the provision of FFAs to metabolic tissues. However, LPL may also contribute to lipoprotein uptake by acting as a molecular bridge between lipoproteins and cell surface receptors. Recent studies have shown that LPL is abundantly expressed in the brain and predominantly expressed in the macrophages and microglia of the human and murine brain. Moreover, recent findings suggest that LPL plays a direct role in microglial function, metabolism, and phagocytosis of extracellular factors such as amyloid- beta (Aβ). Although the precise function of LPL in the brain remains to be determined, several studies have implicated LPL variants in Alzheimer’s disease (AD) risk. For example, while mutations shown to have a deleterious effect on LPL function and expression (e.g., N291S, HindIII, and PvuII) have been associated with increased AD risk, a mutation associated with increased bridging function (S447X) may be protective against AD. Recent studies have also shown that genetic variants in endogenous LPL activators (ApoC-II) and inhibitors (ApoC-III) can increase and decrease AD risk, respectively, consistent with the notion that LPL may play a protective role in AD pathogenesis. Here, we review recent advances in our understanding of LPL structure and function, which largely point to a protective role of functional LPL in AD neuropathogenesis. View Full-Text
Keywords: lipoprotein lipase; Alzheimer’s disease; microglia; lipoproteins; apoproteins lipoprotein lipase; Alzheimer’s disease; microglia; lipoproteins; apoproteins
►▼ Show Figures 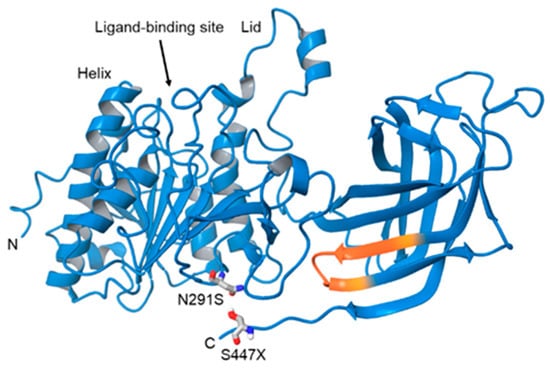