Claudin-4 (CLDN4) is a tight junction protein to maintain the cancer microenvironment. We recently reported the role of the CLDN4 not forming tight junction in the induction of epithelial-mesenchymal transition (EMT). Herein, we investigated the role of CLDN4 in renal cell carcinoma (RCC), focusing on CLDN4. CLDN4 expression in 202 RCCs was examined by immunostaining. CLDN4 phosphorylation and subcellular localization were examined using high metastatic human RCC SN12L1 and low metastatic SN12C cell lines. In 202 RCC cases, the CLDN4 expression decreased in the cell membrane and had no correlation with clinicopathological factors. However, CLDN4 was localized in the nucleus in 5 cases (2%), all of which were pT3. Contrastingly, only 6 of 198 nuclear CLDN4-negative cases were pT3. CLDN4 was found in the nuclear fraction of a highly metastatic human RCC cell line, SN12L1, but not in the low metastatic SN12C cells. In SN12L1 cells, phosphorylation of tyrosine and serine residues was observed in cytoplasmic CLDN4, but not in membranous CLDN4. In contrast, phosphorylation of serine residues was observed in nuclear CLDN4. In SN12L1 cells, CLDN4 tyrosine phosphorylation by EphA2/Ephrin A1 resulted in the release of CLDN4 from tight junction and cytoplasmic translocation. Furthermore, protein kinase C (PKC)-ε phosphorylated the CLDN4 serine residue, resulting in nuclear import. Contrarily, in SN12C cells that showed decreased expression of EphA2/Ephrin A1 and PKCε, the activation of EphA2/EphrinA1 and PKCε induced cytoplasmic and nuclear translocation of CLDN4, respectively. Furthermore, the nuclear translocation of CLDN4 promoted the nuclear translocation of Yes-associated protein (YAP) bound to CLDN4, which induced the EMT phenotype. These findings suggest that the release of CLDN4 by impaired tight junction might be a mechanism underlying the malignant properties of RCC. These findings suggest that the release of CLDN4 by impaired tight junction might be one of the mechanisms of malignant properties of RCC.
Keywords: CLDN4; PKCε; EphA2; Ephrin A1; EMT CLDN4; PKCε; EphA2; Ephrin A1; EMT

The frequency of renal cell carcinoma (RCC) in the Japanese population is 6 out of 100,000, accounting for approximately 1% of all cancers [1] and 2% of all cancers in North America [2]. Thus, RCC is not a frequent disease; however, up to 30% of RCC cases have synchronous or metachronous metastases [2]. Furthermore, RCC cells were detected in the bone marrow aspiration in 25% of RCC cases without metastasis [3], suggesting that RCCs have a high metastatic potential. In cases with clear cell RCC (CCC), which is the most common RCC, 90% or more showed chromosome 3P deletion and inactivation of the von Hippel-Lindau (VHL) gene, leading to hypoxia-inducible factor (HIF)-1 activation [4]. Epithelial-mesenchymal transition (EMT) is a factor related to the metastatic potential of CCC [5], and HIF1 activation is considered a factor promoting EMT [6]. Claudin-4 (CLDN4) is a tight junction protein and an epithelial marker [7,8], and its decreased expression correlates with EMT [9].
Attention has recently been paid to the function of the non-tight junction protein claudins (CLDNs). CLDNs are normally localized in the cell membrane as a tight junction-forming protein, and they regulate the diffusion of solutes through the intercellular space by their homotypic binding [7]. In contrast, it has been reported that CLDNs that do not form a tight junction take part in intracellular signaling [10]. CLDN7 binds to integrin β1 and suppresses the growth and movement of colon cancer cell lines [11,12]. CLDN4, which does not form tight junctions in undifferentiated gastric cancer, becomes a ligand for integrin β1, activates focal adhesion kinase, and promotes stemness [13]. Furthermore, we have reported that impairment of tight junctions caused by Clostridium perfringens enterotoxin (CPE) leads to alterations in CLDN4 localization, activates Yes-associated protein (YAP), and induces EMT [14,15,16]. However, significance of nuclear CLDN4 has not been reported in RCC.
In this study, we investigated the role of CLDN4 in RCC, focusing on nuclear CLDN4.

To elucidate the significance of CLDN4 in the nucleus, we compared in the intracellular localization of CLDN4 between the highly metastatic SN12L1 cell line with the parent low metastatic SN12C cell line (Figure 2). CLDN4 was localized in the cell membrane and cytoplasm in both cell lines, whereas it was localized in the nucleus only in SN12L1 cells (Figure 2A). The phosphorylation of serine or tyrosine residues in CLDN4 immunoprecipitates in the membrane, cytoplasmic, and nuclear fractions of SN12L1 cells was examined; however, no phosphorylation was observed in the membrane fraction (Figure 2B). In contrast, the phosphorylation of both serine and tyrosine was observed in the cytoplasmic fraction, while the nuclear fraction showed only serine phosphorylation.
EphA2 is reported to phosphorylate CLDN4 at Tyr208 [18]. We examined the expression of EphA2 and the ligand Ephrin A1 (Figure 2C). SN12C cells expressed EphA2 and Ephrin A1 at very low levels, whereas SN12L1 cells expressed both genes at high levels. In SN12L1 cells, the inhibition of EphA2 altered CLDN4 intracellular localization and resulted in an increase of CLDN4 in the membrane fraction and decrease in the cytosolic and nuclear fractions (Figure 2D). In contrast, in SN12C cells, treatment with Ephrin A1 altered CLDN4 intracellular localization, such that there was a decrease in the membrane fraction and an increase in the cytosolic and nuclear fractions (Figure 2E).

2.3. Role of PKCε in CLDN4 Nuclear Translocation and YAP Activation

As PKCε has been reported to phosphorylate the serine residue of CLDN4 [19], the expression of PKCε was examined (Figure 3A). Expression of PKCε was observed in SN12L1 cells, but not in SN12C cells. Furthermore, treatment of SN12L1 cells with a PKCε inhibitor increased CLDN4 expression in the plasma membrane and cytoplasmic fractions, whereas its levels in the nuclear fraction decreased to 40% (Figure 3B). We previously reported that nuclear CLDN4 is correlated with the activation of YAP in oral cancer [14]. Therefore, we investigated YAP in SN12L1 cells (Figure 3C). YAP was bound to CLDN4 in whole-cell lysate, and nuclear translocation of YAP was observed. Notably, treatment with PKCε did not change the YAP protein level, but it decreased CLDN4-bound YAP and nuclear YAP. In contrast, when PKCε activator was applied to SN12C cells, in which nuclear CLDN4 was not observed, the intracellular localization of CLDN4 decreased in the plasma membrane and cytoplasmic fraction but increased in the nuclear fraction (Figure 3D). Moreover, under these conditions, we observed binding between YAP and CLDN4, and nuclear YAP was induced (Figure 3E).

2.4. YAP Activation and Induction of the EMT Phenotype

We reviewed the pathological diagnosis and clinical data of 202 patients with surgically resected RCC, reviewed at the Department of Molecular Pathology, Nara Medical University, during 2006–2015. As written informed consent was not obtained, any identifying information was removed from the samples before analysis to ensure strict privacy protection (unlinkable anonymization). All procedures were performed in accordance with the Ethical Guidelines for Human Genome/Gene Research enacted by the Japanese Government and were approved by the Ethics Committee of Nara Medical University (Approval Number 937, 2020/4/1).

Consecutive 4-mm sections were immunohistochemically stained using anti-CLDN4 antibody (0.2 µg/mL, clone 4D3), which was established in our laboratory [20], and a previously described immunoperoxidase technique [48] was performed. Secondary antibodies for peroxidase-conjugated mouse IgG and alkaline phosphatase-conjugated rabbit IgG (Medical and Biological Laboratories, Nagoya, Japan) were used at a concentration of 0.2 µg/mL. Tissue sections were color-developed with diamine benzidine hydrochloride (DAKO, Glastrup, Denmark). Slides were counterstained with Meyer’s hematoxylin (Sigma). We counted immunopositive cells at the cytoplasmic membrane. Staining strength was scored from 0 to 3 (a score of 1 was used to describe the expression level in normal renal tubule epithelium). The staining index was calculated as the staining strength score multiplied by the staining area (%). As negative control, non-immunized rat IgG (Santa-Cruz) was used as the primary antibody.

Immunoprecipitation was performed according to the method described previously [51]. Briefly, whole-cell lysates were pre-cleaned in lysis buffer with protein A/G agarose (Santa-Cruz) for 1 h at 4 °C and subsequently centrifuged. The supernatants were incubated with antibody against CLDN4 (4D3) and protein A/G agarose for 3 h at 4 °C. Precipitates were collected by centrifugation, washed five times with lysis buffer, solubilized with sample buffer (40 µL; Sigma), and subjected to immunoblot analysis with antibodies against YAP1 (Abcam) or phosphoserine (Abcam, ab9332), or phosphotyrosine (Abcam, ab179530). Loading protein volume was confirmed by slot blot analysis of 10 µL of the samples by Coomassie blue staining (Bio-Rad, Hercules, CA, USA).

An ELISA kit was used to measure the concentration of human CLDN4 (Cusabio Biotech Co., Ltd., Houston, TX, USA). The assay was performed according to the manufacturers’ instructions, and whole-cell lysates were used for the measurements.

BALB/c nude mice (4 weeks old, male) were purchased from SLC Japan (Shizuoka, Japan). The mice were maintained according to the institutional guidelines approved by the Committee for Animal Experimentation of Nara Medical University, in accordance with the current regulations and standards of the Ministry of Health, Labor, and Welfare (Approval number 12047, 2017/7/20).

SN12L1 and SN12C cells were pretreated with or without PKC-I (10 μM) and PKC-A (5 µM), respectively, for 24 h. Suspensions (1 × 106 cells/50 μL of PBS) of SN12L1 and SN12C cells labeled with VivoTrack 680 (PerkinElmer Inc., Waltham, MA, USA) were injected into the caudal vein. The mice were euthanized, and the lungs were observed using the Clairvivo OPT in vivo imager (Shimazu, Kyoto, Japan) two weeks after inoculation.

The authors thank Tomomi Masutani for expert assistance with the preparation of this manuscript.

The authors declare that the research was conducted in the absence of any commercial or financial relationships that could be construed as a potential conflict of interest. 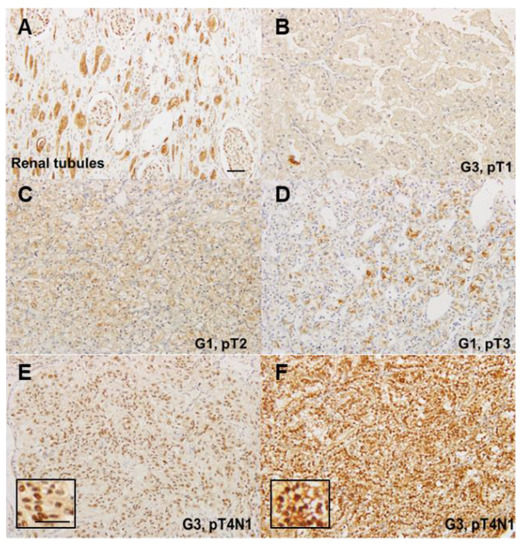 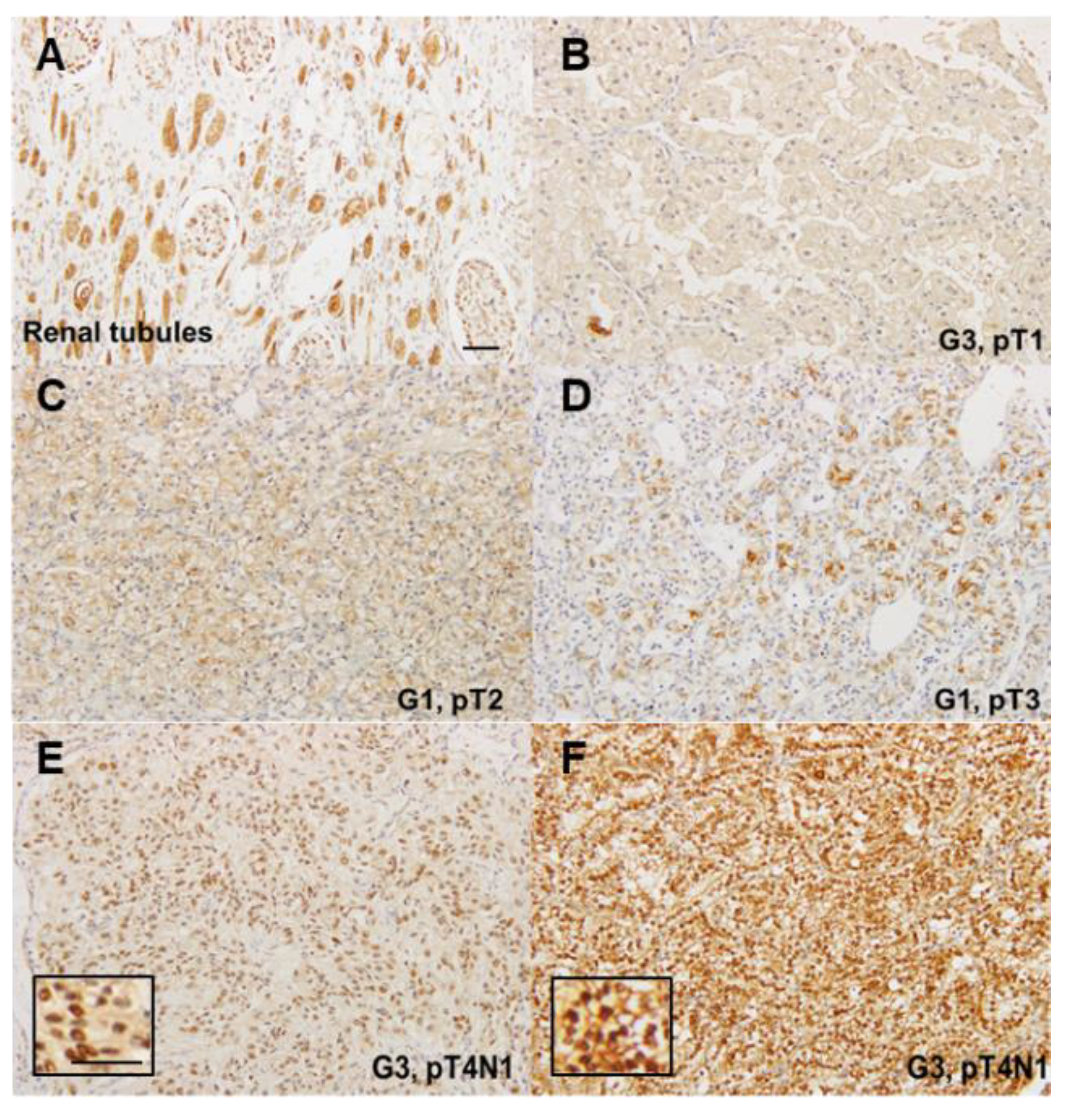 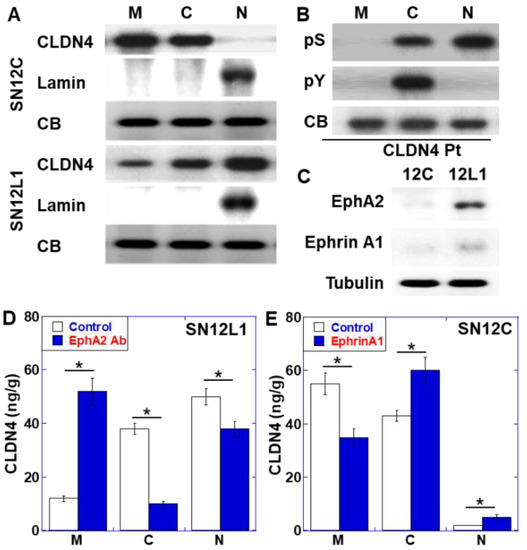 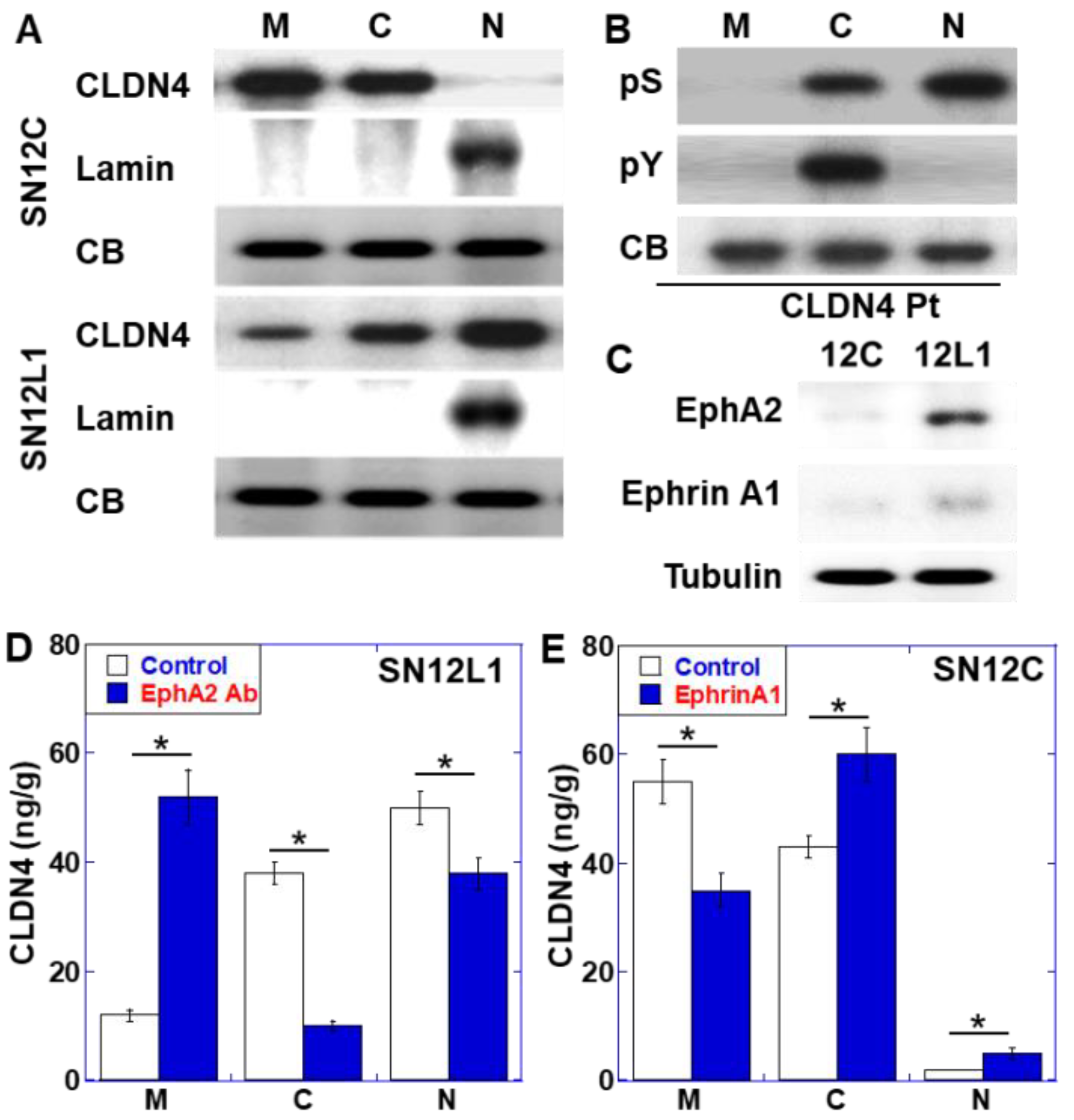 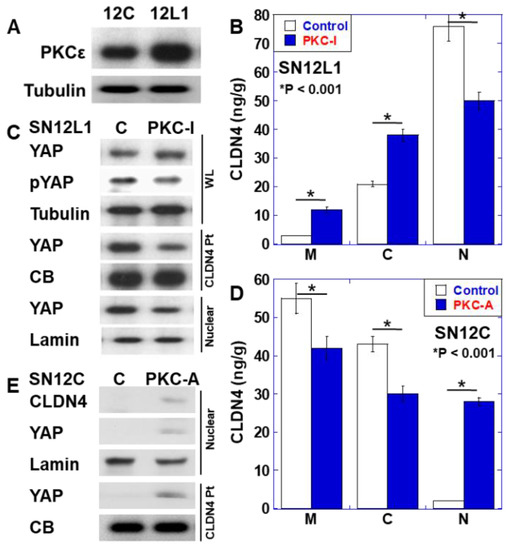 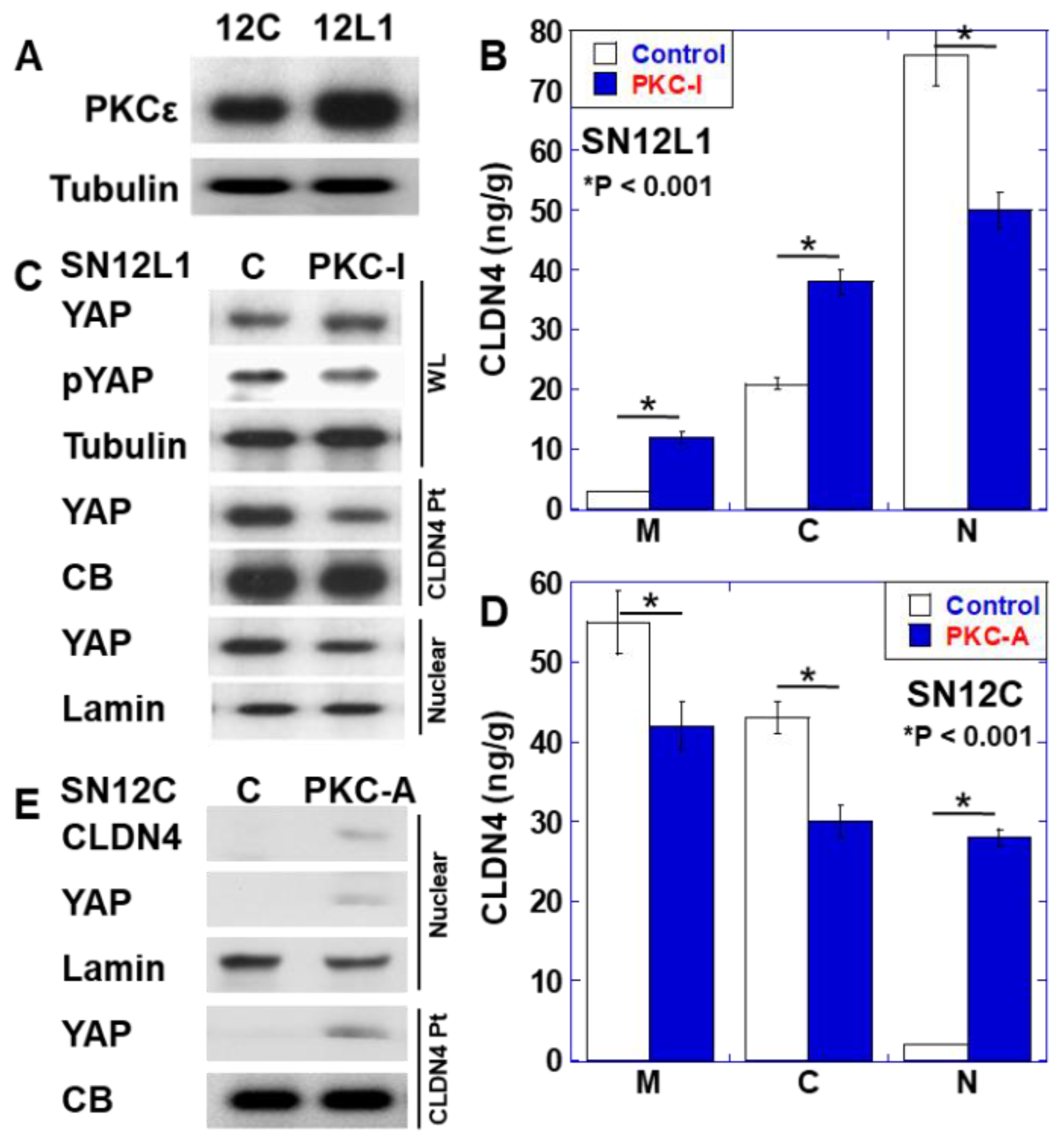 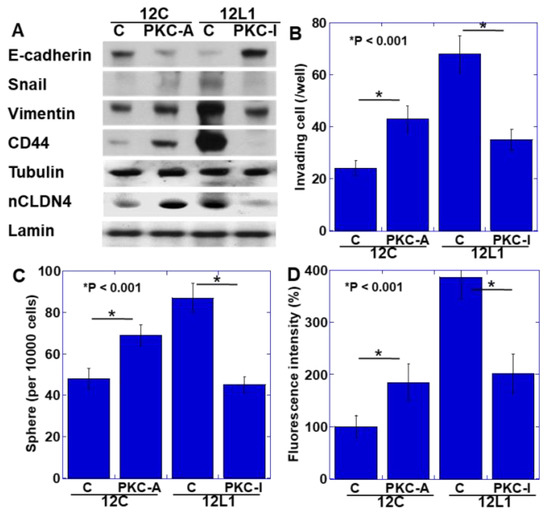 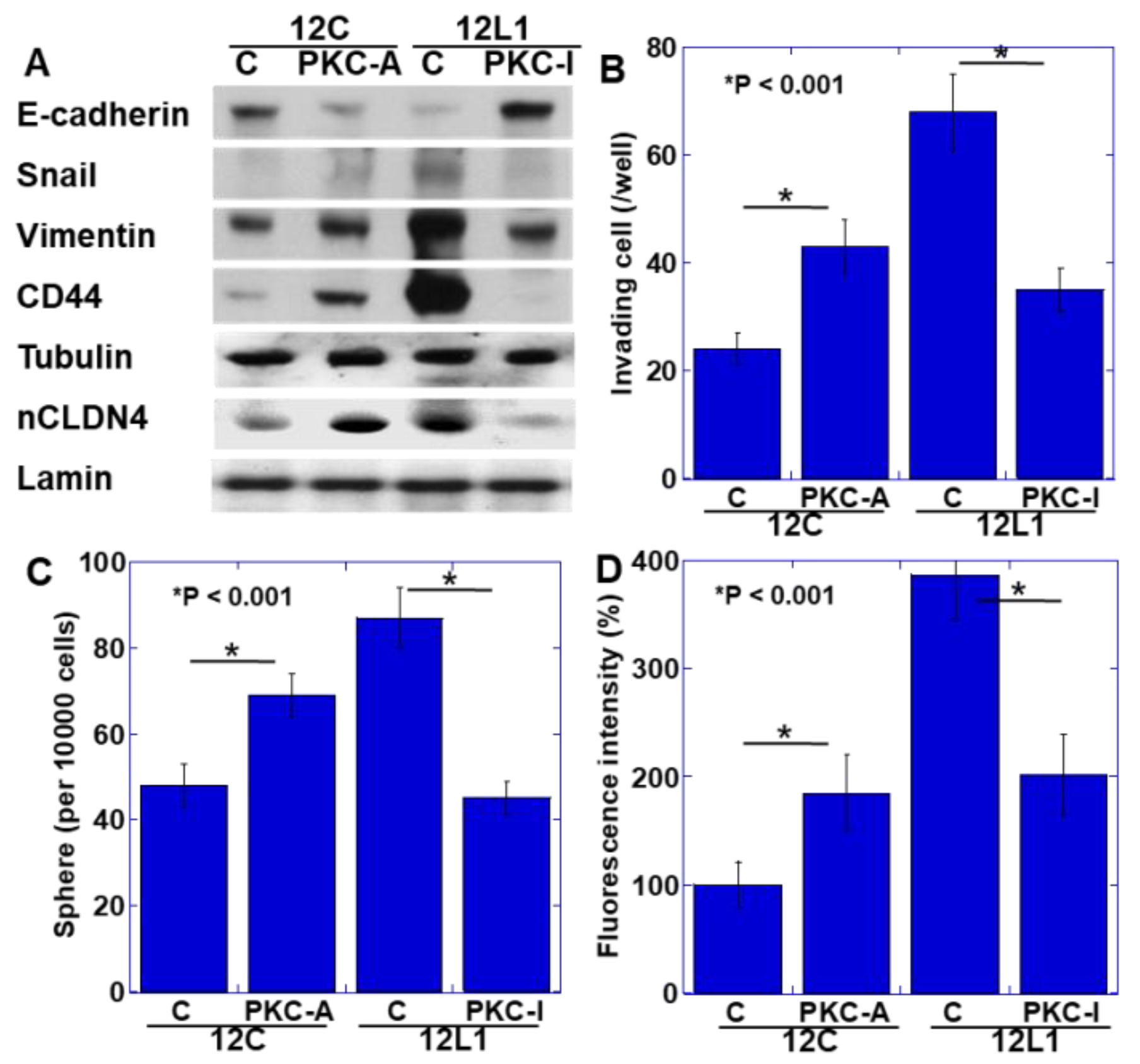 Table 2. Nuclear CLDN4 expression in renal cell carcinomas.
Table 2. Nuclear CLDN4 expression in renal cell carcinomas.
1) Clinicopathological classification is according to the UICC-TNM Classification [17]. pT3, Tumor extends into major veins or perinephric tissues but not into the ipsilateral adrenal gland and not beyond the Gerota fascia. 2) p value was calculated using Student’s t-test.
© 2020 by the authors. Licensee MDPI, Basel, Switzerland. This article is an open access article distributed under the terms and conditions of the Creative Commons Attribution (CC BY) license (http://creativecommons.org/licenses/by/4.0/).
We use cookies on our website to ensure you get the best experience. Read more about our cookies here.
Accept
We have just recently launched a new version of our website. Help us to further improve by taking part in this short 5 minute survey here. here.
Never show this again