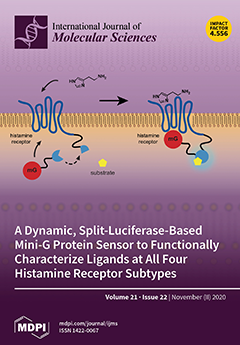 Cover Story (view full-size image): In drug research, assays with proximal readout are of great importance to study target-specific effects of potential drug candidates. In this study, we report on the application of the split-NanoLuc to all four histamine receptor (HR) subtypes and recently published mini-G proteins. A modern, live-cell-based assay with nonradioactive readout was established, and we demonstrated its usefulness to functionally characterize HR agonists and antagonists. High signal amplitudes and excellent dynamic ranges, originating from the combination of the split-luciferase complementation technique with cytosolic G protein chimeras, are advantageous. In prospective studies, especially the kinetic options of the reported assay might contribute to the design and optimization of ligand scaffolds and provide a deeper insight into signal formation and transduction. View this paper
Previous Issue
Volume 21, November-1
Next Issue
Volume 21, December-1
We use cookies on our website to ensure you get the best experience. Read more about our cookies here.
Accept
We have just recently launched a new version of our website. Help us to further improve by taking part in this short 5 minute survey here. here.
Never show this again