Hydroa vacciniforme (HV) is a rare form of photosensitivity disorder in children and is frequently associated with Epstein–Barr virus (EBV) infection, whereas HV-like lymphoproliferative disorders (HVLPD) describe a spectrum of EBV-associated T-cell or natural killer (NK)-cell lymphoproliferations with HV-like cutaneous manifestations, including EBV-positive HV, atypical HV, and HV-like lymphoma. Classic HV occurs in childhood with papulovesicules on sun-exposed areas, which is usually induced by sunlight and ultraviolet irradiation, and mostly resolves by early adult life. Unlike classic HV, atypical or severe HV manifests itself as recurrent papulovesicular eruptions in sun-exposed and sun-protected areas associated occasionally with facial edema, fever, lymphadenopathy, oculomucosal lesions, gastrointestinal involvement, and hepatosplenomegaly. Notably, atypical or severe HV may progress to EBV-associated systemic T-cell or natural killer (NK)-cell lymphoma after a chronic course. Although rare in the United States and Europe, atypical or severe HV and HV-like lymphoma are predominantly reported in children from Asia and Latin America with high EBV DNA levels, low numbers of NK cells, and T cell clones in the blood. In comparison with the conservative treatment used for patients with classic HV, systemic therapy such as immunomodulatory agents is recommended as the first-line therapy for patients with atypical or severe HV. This review aims to provide an integrated overview of current evidence and knowledge of HV and HVLPD to elucidate the pathophysiology, practical issues, environmental factors, and the impact of EBV infection. View Full-Text
Keywords: Epstein–Barr virus; hydroa vacciniforme; lymphoproliferative disorders; photodermatosis; sunlight; skin; ultraviolet-radiation Epstein–Barr virus; hydroa vacciniforme; lymphoproliferative disorders; photodermatosis; sunlight; skin; ultraviolet-radiation
►▼ Show Figures 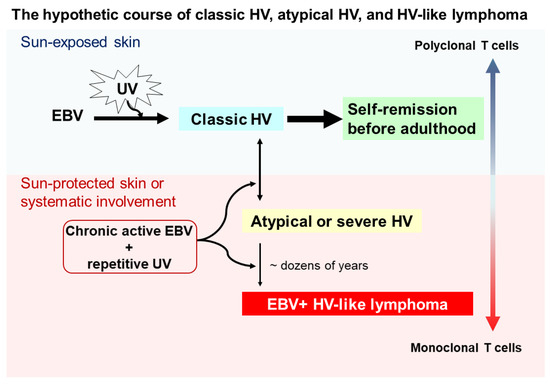