Styrax Japonica Sieb. et Zucc. has been used as traditional medicine in inflammatory diseases, and isolated compounds have shown pharmacological activities. Pinoresinol glucoside (PIN) belonging to lignins was isolated from the stem bark of S. Japonica. This study aimed to investigate the biological function and mechanisms of PIN on cell migration, osteoblast differentiation, and matrix mineralization. Herein, we investigated the effects of PIN in MC3T3-E1 pre-osteoblasts, which are widely used for studying osteoblast behavior in in vitro cell systems. At concentrations ranging from 0.1 to 100 μM, PIN had no cell toxicity in pre-osteoblasts. Pre-osteoblasts induced osteoblast differentiation, and the treatment of PIN (10 and 30 μM) promoted the cell migration rate in a dose-dependent manner. At concentrations of 10 and 30 μM, PIN elevated early osteoblast differentiation in a dose-dependent manner, as indicated by increases in alkaline phosphatase (ALP) staining and activity. Subsequently, PIN also increased the formation of mineralized nodules in a dose-dependent manner, as indicated by alizarin red S (ARS) staining, demonstrating positive effects of PIN on late osteoblast differentiation. In addition, PIN induced the mRNA level of BMP2, ALP, and osteocalcin (OCN). PIN also upregulated the protein level of BMP2 and increased canonical BMP2 signaling molecules, the phosphorylation of Smad1/5/8, and the protein level of Runt-related transcription factor 2 (RUNX2). Furthermore, PIN activated non-canonical BMP2 signaling molecules, activated MAP kinases, and increased β-catenin signaling. The findings of this study indicate that PIN has biological roles in osteoblast differentiation and matrix mineralization, and suggest that PIN might have anabolic effects in bone diseases such as osteoporosis and periodontitis. View Full-Text
Keywords: Styrax Japonica Sieb. et Zucc; PIN; osteoblast; migration; differentiation; mineralization Styrax Japonica Sieb. et Zucc; PIN; osteoblast; migration; differentiation; mineralization
►▼ Show Figures 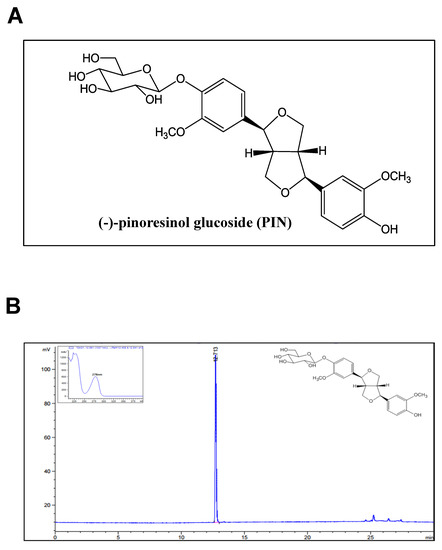