Yeast Microbiota during Sauerkraut Fermentation and Its Characteristics

Sauerkraut is the most important fermented vegetable obtained in Europe. It is produced traditionally by spontaneous fermentation of cabbage. The aim of this study was to determine biodiversity of yeasts present during fermentation of eight varieties of cabbages (Ambrosia, Avak, Cabton, Galaxy, Jaguar, Kamienna Głowa, Manama and Ramco), as well as characterize obtained yeast isolates. WL Nutrient Agar with Chloramphenicol was used to enumerate yeast. Isolates were differentiated using RAPD-PCR and identified by sequencing of the 5.8S-ITS rRNA gene region. The volatiles production was analyzed using SPME-GC-TOFMS. Our research confirmed that during sauerkraut fermentation there is an active growth of the yeasts, which begins in the first phases. The maximal number of yeast cells from 1.82 to 4.46 log CFU g−1 occurred after 24 h of fermentation, then decrease in yeast counts was found in all samples. Among the isolates dominated the cultures Debaryomyces hansenii, Clavispora lusitaniae and Rhodotorula mucilaginosa. All isolates could grow at NaCl concentrations higher than 5%, were relatively resistant to low pH and the presence of lactic acid, and most of them were characterized by killer toxins activity. The highest concentration of volatiles (mainly esters and alcohols) were produced by Pichia fermentans and D. hansenii strains. View Full-Text
Keywords: sauerkraut; yeast microbiota; 5.8S-ITS rRNA gene; Debaryomyces; resistance for stress conditions; volatile profile sauerkraut; yeast microbiota; 5.8S-ITS rRNA gene; Debaryomyces; resistance for stress conditions; volatile profile
►▼ Show Figures 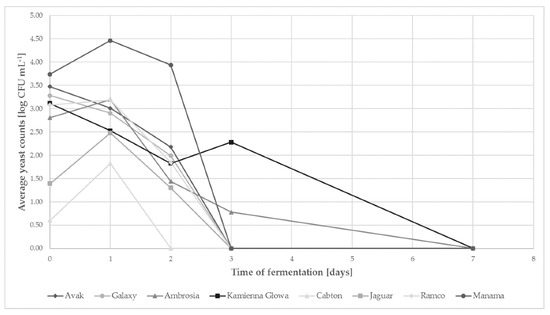