An Arabidopsis Mutant Over-Expressing Subtilase SBT4.13 Uncovers the Role of Oxidative Stress in the Inhibition of Growth by Intracellular Acidification
Previous Article in Journal

bZIP transcription factors have been reported to be involved in many different biological processes in plants. The ABA (abscisic acid)-dependent AREB/ABF-SnRK2 pathway has been shown to play a key role in the response to osmotic stress in model plants. In this study, a novel bZIP gene, FtbZIP5, was isolated from tartary buckwheat, and its role in the response to drought and salt stress was characterized by transgenic Arabidopsis. We found that FtbZIP5 has transcriptional activation activity, which is located in the nucleus and specifically binds to ABRE elements. It can be induced by exposure to PEG6000, salt and ABA in tartary buckwheat. The ectopic expression of FtbZIP5 reduced the sensitivity of transgenic plants to drought and high salt levels and reduced the oxidative damage in plants by regulating the antioxidant system at a physiological level. In addition, we found that, under drought and salt stress, the expression levels of several ABA-dependent stress response genes (RD29A, RD29B, RAB18, RD26, RD20 and COR15) in the transgenic plants increased significantly compared with their expression levels in the wild type plants. Ectopic expression of FtbZIP5 in Arabidopsis can partially complement the function of the ABA-insensitive mutant abi5-1 (abscisic acid-insensitive 5-1). Moreover, we screened FtSnRK2.6, which might phosphorylate FtbZIP5, in a yeast two-hybrid experiment. Taken together, these results suggest that FtbZIP5, as a positive regulator, mediates plant tolerance to salt and drought through ABA-dependent signaling pathways. View Full-Text
Keywords: tartary buckwheat; AREB/ABF; salt and drought stress tartary buckwheat; AREB/ABF; salt and drought stress
►▼ Show Figures 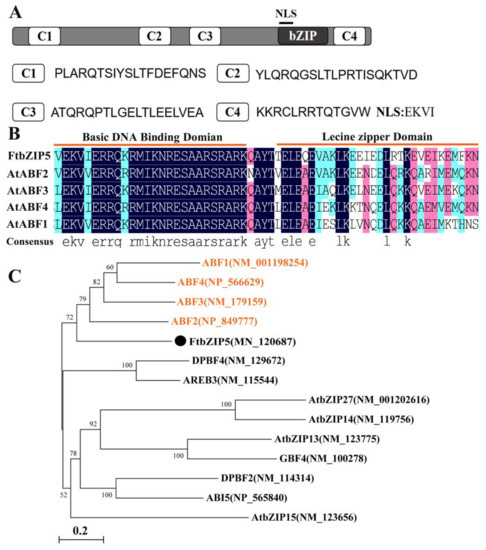