Neuromuscular Diseases Due to Chaperone Mutations: A Review and Some New Results
Previous Article in Special Issue

The Vitamin A and D Exposure of Cells Affects the Intracellular Uptake of Aluminum Nanomaterials and Its Agglomeration Behavior: A Chemo-Analytic Investigation

Nanoplastics Cause Neurobehavioral Impairments, Reproductive and Oxidative Damages, and Biomarker Responses in Zebrafish: Throwing up Alarms of Wide Spread Health Risk of Exposure

Plastic pollution is a growing global emergency and it could serve as a geological indicator of the Anthropocene era. Microplastics are potentially more hazardous than macroplastics, as the former can permeate biological membranes. The toxicity of microplastic exposure on humans and aquatic organisms has been documented, but the toxicity and behavioral changes of nanoplastics (NPs) in mammals are scarce. In spite of their small size, nanoplastics have an enormous surface area, which bears the potential to bind even bigger amounts of toxic compounds in comparison to microplastics. Here, we used polystyrene nanoplastics (PS-NPs) (diameter size at ~70 nm) to investigate the neurobehavioral alterations, tissue distribution, accumulation, and specific health risk of nanoplastics in adult zebrafish. The results demonstrated that PS-NPs accumulated in gonads, intestine, liver, and brain with a tissue distribution pattern that was greatly dependent on the size and shape of the NPs particle. Importantly, an analysis of multiple behavior endpoints and different biochemical biomarkers evidenced that PS-NPs exposure induced disturbance of lipid and energy metabolism as well as oxidative stress and tissue accumulation. Pronounced behavior alterations in their locomotion activity, aggressiveness, shoal formation, and predator avoidance behavior were exhibited by the high concentration of the PS-NPs group, along with the dysregulated circadian rhythm locomotion activity after its chronic exposure. Moreover, several important neurotransmitter biomarkers for neurotoxicity investigation were significantly altered after one week of PS-NPs exposure and these significant changes may indicate the potential toxicity from PS-NPs exposure. In addition, after ~1-month incubation, the fluorescence spectroscopy results revealed the accumulation and distribution of PS-NPs across zebrafish tissues, especially in gonads, which would possibly further affect fish reproductive function. Overall, our results provided new evidence for the adverse consequences of PS-NPs-induced behavioral dysregulation and changes at the molecular level that eventually reduce the survival fitness of zebrafish in the ecosystem. View Full-Text
Keywords: polystyrene; nanoplastics; neurotoxicity; behavior test; ecotoxicity; oxidative stress; zebrafish polystyrene; nanoplastics; neurotoxicity; behavior test; ecotoxicity; oxidative stress; zebrafish
►▼ Show Figures 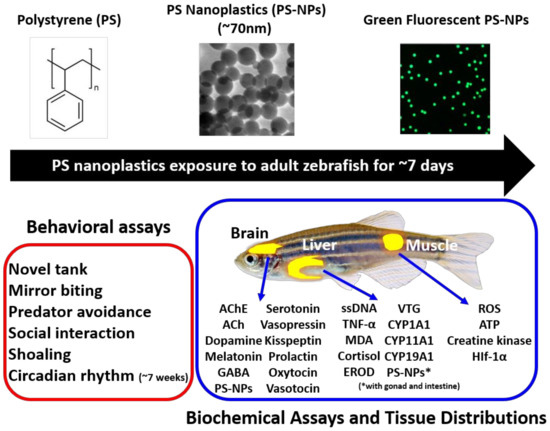