Oestrogenic Endocrine Disruptors in the Placenta and the Fetus

Perillaldehyde (PAE), an essential oil in Perilla plants, serves as a safe flavor ingredient in foods, and shows an effectively antifungal activity. Reactive oxygen species (ROS) accumulation in Aspergillus flavus plays a critical role in initiating a metacaspase-dependent apoptosis. However, the reason for ROS accumulation in A. flavus is not yet clear. Using transcriptome sequencing of A. flavus treated with different concentrations of PAE, our data showed that the ROS accumulation might have been as a result of an inhibition of energy metabolism with less production of reducing power. By means of GO and KEGG enrichment analysis, we screened four key pathways, which were divided into two distinct groups: a downregulated group that was made up of the glycolysis and pentose phosphate pathway, and an upregulated group that consisted of MAPK signaling pathway and GSH metabolism pathway. The inhibition of dehydrogenase gene expression in two glycometabolism pathways might play a crucial role in antifungal mechanism of PAE. Also, in our present study, we systematically showed a gene interaction network of how genes of four subsets are effected by PAE stress on glycometabolism, oxidant damage repair, and cell cycle control. This research may contribute to explaining an intrinsic antifungal mechanism of PAE against A. flavus. View Full-Text
Keywords: Aspergillus flavus; Perilla; oxidative stress; energy metabolism; antifungal mechanism Aspergillus flavus; Perilla; oxidative stress; energy metabolism; antifungal mechanism
►▼ Show Figures 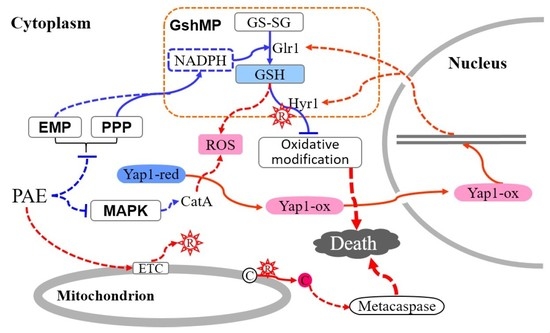