Somatostatin Analogs in Clinical Practice: A Review
Next Article in Special Issue

Metal tolerance proteins (MTPs) are plant divalent cation transporters that play important roles in plant metal tolerance and homeostasis. Poplar is an ideal candidate for the phytoremediation of heavy metals because of its numerous beneficial attributes. However, the definitive phylogeny and heavy metal transport mechanisms of the MTP family in poplar remain unknown. Here, 22 MTP genes in P. trichocarpa were identified and classified into three major clusters and seven groups according to phylogenetic relationships. An evolutionary analysis suggested that PtrMTP genes had undergone gene expansion through tandem or segmental duplication events. Moreover, all PtrMTPs were predicted to localize in the vacuole and/or cell membrane, and contained typical structural features of the MTP family, cation efflux domain. The temporal and spatial expression pattern analysis results indicated the involvement of PtrMTP genes in poplar developmental control. Under heavy metal stress, most of PtrMTP genes were induced by at least two metal ions in roots, stems or leaves. In addition, PtrMTP8.1, PtrMTP9 and PtrMTP10.4 displayed the ability of Mn transport in yeast cells, and PtrMTP6 could transport Co, Fe and Mn. These findings will provide an important foundation to elucidate the biological functions of PtrMTP genes, and especially their role in regulating heavy metal tolerance in poplar. View Full-Text
Keywords: heavy metal; metal tolerance protein; Populus trichocarpa; evolution; gene expression heavy metal; metal tolerance protein; Populus trichocarpa; evolution; gene expression
►▼ Show Figures 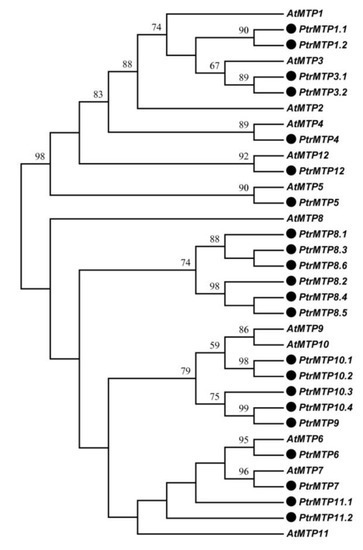