The biological phenomenon of cell fusion plays a crucial role in several physiological processes, including wound healing and tissue regeneration. Here, it is assumed that bone marrow-derived stem cells (BMSCs) could adopt the specific properties of a different organ by cell fusion, thereby restoring organ function. Cell fusion first results in the production of bi- or multinucleated hybrid cells, which either remain as heterokaryons or undergo ploidy reduction/heterokaryon-to-synkaryon transition (HST), thereby giving rise to mononucleated daughter cells. This process is characterized by a merging of the chromosomes from the previously discrete nuclei and their subsequent random segregation into daughter cells. Due to extra centrosomes concomitant with multipolar spindles, the ploidy reduction/HST could also be associated with chromosome missegregation and, hence, induction of aneuploidy, genomic instability, and even putative chromothripsis. However, while the majority of such hybrids die or become senescent, aneuploidy and genomic instability appear to be tolerated in hepatocytes, possibly for stress-related adaption processes. Likewise, cell fusion-induced aneuploidy and genomic instability could also lead to a malignant conversion of hybrid cells. This can occur during tissue regeneration mediated by BMSC fusion in chronically inflamed tissue, which is a cell fusion-friendly environment, but is also enriched for mutagenic reactive oxygen and nitrogen species. View Full-Text
Keywords: stem cells; tissue regeneration; cell fusion; polyploidy; aneuploidy stem cells; tissue regeneration; cell fusion; polyploidy; aneuploidy
►▼ Show Figures 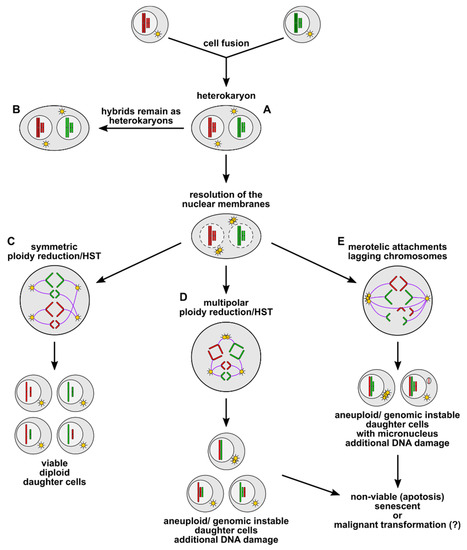