As in mammalian genomes, fly SLC22 genes exist in clusters. The majority of SLC22 genes in Drosophila are found on chromosome 3R with many members found in tandem with other putative SLC22 orthologs. One notably large cluster consists of 6 SLC22 genes (CG7333, CG7342, CG17751, CG17752, CG16727, and CG6231) (Table 1). Inclusion of D. melanogaster orthologous genes in a homology-based analysis of all SLC22 members across a multitude of species (Table 2; Figure 1) resulted in the observation of at least four members that appear orthologous to mammalian SLC22 members (CG6356: Slc22a16, CG7458, SLC22A/CG7442:Slc22a15 and CG3168:Slc22a18) and an additional six members that can be preliminarily assigned to the individual subclades. The subclades of SLC22 are based on phylogenetic relatedness and functional characterization. They exist within two major clades—OAT and OCT. Although recently revised [42] the original definitions still stand here: Oat, Oat-like, Oat-related, Oct, Octn, and Oct/Octn-related [17]. When a GUIDANCE 2.0 alignment was performed and all sequences with a GUIDANCE score of <0.6 were removed, the only topology change observed was the omission of all SLC22A18 sequences and the reassignment of CG3168 to the large fly SLC22 transporter group, indicating that it may have sequence homology with SLC22A18, but not the other members of the Oat-related subclade. Interestingly, CG3168 is the only putative SLC22 ortholog that is localized to the X chromosome in flies. CG6006 and CG8654 fall within the Oat-related subclade and CG6126, CG8654, Orct/CG6331, and Orct2/CG13610 appear to be part of the Oct subclade. The remaining 15 orthologs form their own group outside of the SLC22 subclades and are considered to be mostly organic cation transporters [5,18]. In summary, in flies, SLC22 appears to have at least some orthologous genes that, based off of sequence analysis, may prove to be useful models for their relatively understudied human counterparts.

One of the many advantages of using Drosophila melanogaster as a model organism is its distinct, easily visualized developmental stages. Additionally, RNAi knockdowns of any gene in Drosophila show pupal lethality at a rate of about 15% [34]. These developmental observations provide valuable information regarding the developmental function of orthologous genes that may have compensatory mechanisms in higher-order species. Three SLC22 ubiquitous knockdowns (CG7442/SLC22A, CG3168, and CG6356) proved to be lethal at the pupa stage when crossed with the ubiquitous da-GAL4 driver line. Crosses were repeated three times to confirm phenotypes. CG6356 appears to be a direct ortholog of SLC22A16, a carnitine transporter related to OCTNs. In addition, CG3168, which also arrests at the pupa stage is a putative ortholog of the poorly understood SLC22 member, SLC22A18. To our knowledge, the murine knockouts of these genes have not been reported.

Paraquat testing is commonly used in Drosophila to determine oxidative stress resistance in which increased survival is correlated to increased resistance to oxidative stress [36,37]. Previous studies have established reliable dose-response curves for paraquat testing in D. melanogaster [45]. SLC22 transport proteins in the proximal tubule cells of the kidney take small molecules, such as the antioxidants and SLC22 characteristic substrates uric acid and ergothioneine, into cells to be later excreted [39,40,46,47]. By blocking this route of excretion, levels of these small molecules, such as antioxidants (including dietary flavonoids), are expected to increase in the Drosophila hemolymph and increased hemolymph levels of antioxidants would confer resistance to oxidative stress. Through paraquat testing, we show that knocking down SLC22 members in Drosophila significantly increases resistance to oxidative stress at different time points in at least four knock-down lines (CG4630: p < 0.05, CG6006: p < 0.05, CG6126: p < 0.01 and CG16727: p < 0.05) when compared to parent and da-GAL4 control lines (Figure 2, Figure S1–S4). The most apparent oxidative stress resistant phenotype is observed for the knock-down of CG6126, showing statistically significant increased survival at 36-, 48- and 60-h time points with 100% survival of the RNAi knockdown flies for all three time points – and an average of about 40% at 36 h, 20% at 48 h, and 10% at 60 h for the parent lines which were used as a control (p < 0.01). In mice, it is known that SLC22 transporters like OAT1, OAT3, RST, and OCTN1 directly regulate key antioxidants such as uric acid, EGT, flavonoids, and TCA intermediates [6,25,48]. Whether or not these fly transporters directly or indirectly regulate redox states will be explored in future studies.

SLC22 human and mouse sequences were collected manually from the NCBI protein database. Sea Urchin and C. elegans sequences were collected manually from EchinoBase (http://www.echinobase.org/Echinobase/) and WormBase (https://www.wormbase.org/#012-34-5), respectively [71,72]. Sequences were confirmed using the UCSC genome browser by searching within each available species on the online platform (https://genome.ucsc.edu/cgi-bin/hgGateway) [73]. The NCBI BLASTp web-based program was used to find sequences similar to those that were searched for manually [74]. BLASTp was run with default parameters using query SLC22 sequences from human or mouse. The database chosen was non-redundant protein sequence (nr), and no organisms were excluded. SLC22 fruit fly orthologs were determined from FlyBase (http://flybase.org/reports/FBgg0000667.html), and sequences were collected manually from the NCBI protein database [75]. Genomic locations of all transporters in question for fruit fly were determined from FlyBase. Drosophila tissue expression data was collected from FlyAtlas (http://flyatlas.org/atlas.cgi) [15].

Sequences for SLC22 were aligned using Clustal-Omega (Clustal-W) and MAFFT (Multiple alignment using fast Fourier transform) with default parameters via the online platform provided by the European Bioinformatics Institute (EMBL-EBI) (https://www.ebi.ac.uk/Tools/msa/clustalo/) [76,77,78]. Clustal-W and MAFFT produced similar topologies. These alignments were then visualized using The Interactive Tree of Life (http://itol.embl.de/) [79]. Topology confidence was additionally confirmed by branch length values, which are a result of the neighbor-joining method which calculates the number of amino acid changes between the organism at the end of the branch and the common ancestor from which it branched to visually display relatedness [80].

F1 offspring were observed from the egg stage through eclosion. Developmental phenotypes were defined as normal development of the F1 generation up until the failure to reach eclosion and surpass the pupa stage. Male F1 flies aged two to seven days after eclosion were tested for paraquat sensitivity as defined by survival. Both parent lines were tested in parallel as controls. Three replicates of 10 flies each were tested per strain. Flies were fed on a 3 mm Whatmann paper soaked with 10 mM paraquat (N,N′-dimethyl-4,4′-bipyridinium dichloride, Sigma) in 10% sucrose. Fresh paraquat was added daily. For the initial 60 h, the number of dead flies were recorded every 12 h. All tests were performed at room temperature. In order to avoid unnecessary stress, flies were not starved before adding paraquat. The significance of survival trends was assessed using one-way ANOVA followed by a post hoc Tukey’s t-test. 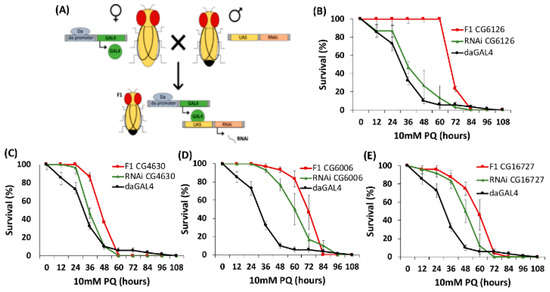 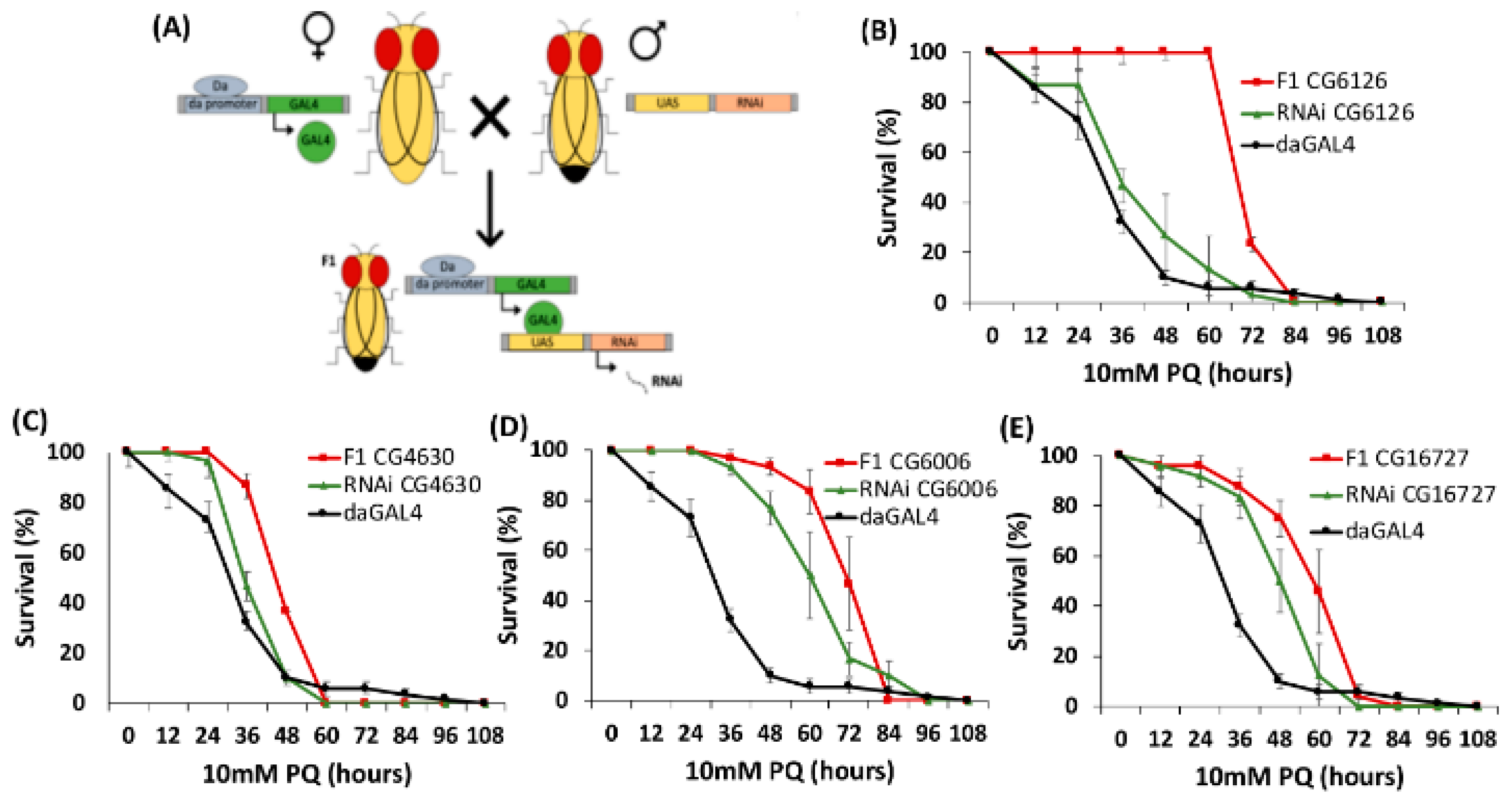 Table 2. Sequence alignment and functional analysis of SLC22 in Drosophila Melanogaster. ✓addresses column title.
Table 2. Sequence alignment and functional analysis of SLC22 in Drosophila Melanogaster. ✓addresses column title.
Our analysis consists of a phylogenetic analysis (performed with both ClustalOmega and MAFFT alignments), observational developmental phenotypes as well as Paraquat sensitivity testing, both denoted by a check mark. Each cross that arrested at the pupa stage was repeated on three separate occasions. Paraquat tests were performed on the F1 generation of a cross between SLC22 RNAi knock-down lines (obtained from BDSC) and da-GAL4 driver parent lines. Percent survival of F1 flies was compared to both parent lines as controls. Each test consisted of 3 replicates of 10 male flies per line. * indicates a topology seen with ClustalOmega alignment only. Genes are ordered by chromosomal location and those which appear in tandem are bolded. PQR: positive paraquat resistance phenotype.
© 2020 by the authors. Licensee MDPI, Basel, Switzerland. This article is an open access article distributed under the terms and conditions of the Creative Commons Attribution (CC BY) license (http://creativecommons.org/licenses/by/4.0/).
We use cookies on our website to ensure you get the best experience. Read more about our cookies here.
Accept
We have just recently launched a new version of our website. Help us to further improve by taking part in this short 5 minute survey here. here.
Never show this again