Oral squamous cell carcinoma (OSCC) is a cancerous disease with poor prognosis. According to the statistics, the 5-year survival rate has not improved significantly over the past 20 years. The platelet-derived growth factor (PDGF) and its signaling pathway is a key regulator of angiogenesis and tumorigenesis. High level of PDGF and its receptor (PDGFR) have been reported in several types of malignancies. In this study, we investigated the relationship of the molecular expression levels of PDGF and PDGFR with clinicopathological parameters in OSCC. To this end, we measured the mRNA and protein levels of PDGF and PDGFR by real-time quantitative PCR (qRT-PCR), immunohistochemistry, and enzyme-linked immunosorbent assay (ELISA), respectively. We found positive correlations of the mRNA levels of PDGFA, PDGFB, and PDGFRB with lymph node metastasis and poor overall survival (OS). High expression of PDGF, PDGFRA, and PDGFRB were remarkably associated with lymph node metastasis and poor OS, as determined by immunohistochemistry. Preoperative serum levels of PDGF-AA and PDGF-BB had a positive correlation with preoperative platelet count. Elevated serum levels of PDGF-AA. PDGF-BB, and platelet count correlated with lymph node metastasis and an unfavorable outcome. In multivariate Cox regression analysis, PDGFA mRNA, PDGFB mRNA, PDGFRB mRNA, PDGF immunoexpression, PDGFRB immunoexpression, serum PDGF-AA, serum PDGF-BB, and platelet count emerged as significant independent prognostic factors for OS. In vitro, we found that elevated PDGF promotes colony formation, migration, and invasiveness of SAS and OECM-1 cancer cell lines. Our results suggest that the expression level of serum PDGF has the potential to become a useful diagnostic marker for the prognosis of OSCC. In addition, PDGFR should be considered as a potential therapeutic target for OSCC. Furthermore, research should be undertaken to elucidate the role of PDGF and PDGFR regarding the behavior of tumor cells in OSCC. View Full-Text
Keywords: oral squamous cell carcinoma; platelet-derived growth factor; platelet-derived growth factor receptor; survival oral squamous cell carcinoma; platelet-derived growth factor; platelet-derived growth factor receptor; survival
►▼ Show Figures 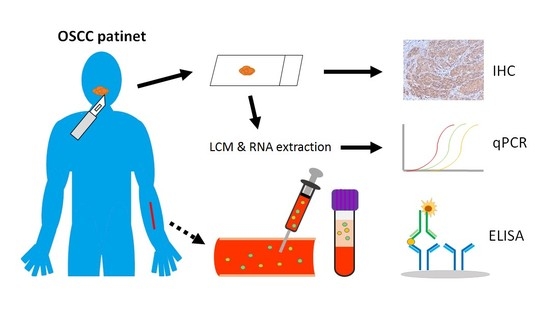