The Optogenetic Revolution in Cerebellar Investigations

The cerebellum is most renowned for its role in sensorimotor control and coordination, but a growing number of anatomical and physiological studies are demonstrating its deep involvement in cognitive and emotional functions. Recently, the development and refinement of optogenetic techniques boosted research in the cerebellar field and, impressively, revolutionized the methodological approach and endowed the investigations with entirely new capabilities. This translated into a significant improvement in the data acquired for sensorimotor tests, allowing one to correlate single-cell activity with motor behavior to the extent of determining the role of single neuronal types and single connection pathways in controlling precise aspects of movement kinematics. These levels of specificity in correlating neuronal activity to behavior could not be achieved in the past, when electrical and pharmacological stimulations were the only available experimental tools. The application of optogenetics to the investigation of the cerebellar role in higher-order and cognitive functions, which involves a high degree of connectivity with multiple brain areas, has been even more significant. It is possible that, in this field, optogenetics has changed the game, and the number of investigations using optogenetics to study the cerebellar role in non-sensorimotor functions in awake animals is growing. The main issues addressed by these studies are the cerebellar role in epilepsy (through connections to the hippocampus and the temporal lobe), schizophrenia and cognition, working memory for decision making, and social behavior. It is also worth noting that optogenetics opened a new perspective for cerebellar neurostimulation in patients (e.g., for epilepsy treatment and stroke rehabilitation), promising unprecedented specificity in the targeted pathways that could be either activated or inhibited. View Full-Text
Keywords: cerebellum; optogenetics; sensorimotor system; non-sensorimotor functions cerebellum; optogenetics; sensorimotor system; non-sensorimotor functions
►▼ Show Figures 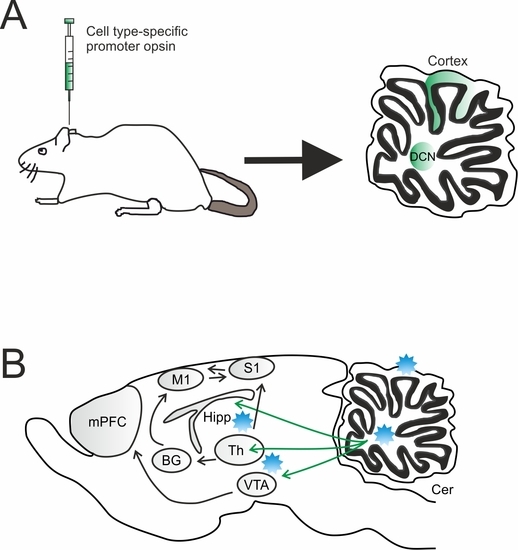