At least half of human immunodeficiency virus (HIV)-infected individuals suffer from a wide range of cognitive, behavioral and motor deficits, collectively known as HIV-associated neurocognitive disorders (HAND). The molecular mechanisms that amplify damage within the brain of HIV-infected individuals are unknown. Recently, we described that HIV augments the opening of connexin-43 (Cx43) hemichannels in cultured human astrocytes, which result in the collapse of neuronal processes. Whether HIV soluble viral proteins such as gp120, can regulate hemichannel opening in astrocytes is still ignored. These channels communicate the cytosol with the extracellular space during pathological conditions. We found that gp120 enhances the function of both Cx43 hemichannels and pannexin-1 channels in mouse cortical astrocytes. These effects depended on the activation of IL-1β/TNF-α, p38 MAP kinase, iNOS, cytoplasmic Ca2+ and purinergic signaling. The gp120-induced channel opening resulted in alterations in Ca2+ dynamics, nitric oxide production and ATP release. Although the channel opening evoked by gp120 in astrocytes was reproduced in ex vivo brain preparations, these responses were heterogeneous depending on the CA1 region analyzed. We speculate that soluble gp120-induced activation of astroglial Cx43 hemichannels and pannexin-1 channels could be crucial for the pathogenesis of HAND. View Full-Text
Keywords: Cx43 hemichannels; connexins; gp120; glia; HIV; astrocyte Cx43 hemichannels; connexins; gp120; glia; HIV; astrocyte
►▼ Show Figures 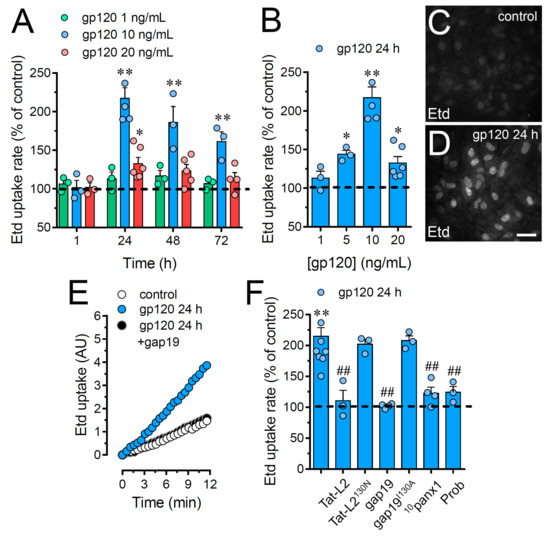