The cancer multidrug resistance is involved in the failure of several treatments during cancer treatment. It is a phenomenon that has been receiving great attention in the last years due to the sheer amount of mechanisms discovered and involved in the process of resistance which hinders the effectiveness of many anti-cancer drugs. Among the mechanisms involved in the multidrug resistance, the participation of ATP-binding cassette (ABC) transporters is the main one. The ABC transporters are a group of plasma membrane and intracellular organelle proteins involved in the process of externalization of substrates from cells, which are expressed in cancer. They are involved in the clearance of intracellular metabolites as ions, hormones, lipids and other small molecules from the cell, affecting directly and indirectly drug absorption, distribution, metabolism and excretion. Other mechanisms responsible for resistance are the signaling pathways and the anti- and pro-apoptotic proteins involved in cell death by apoptosis. In this study we evaluated the influence of three nanosystem (Graphene Quantum Dots (GQDs), mesoporous silica (MSN) and poly-lactic nanoparticles (PLA)) in the main mechanism related to the cancer multidrug resistance such as the Multidrug Resistance Protein-1 and P-glycoprotein. We also evaluated this influence in a group of proteins involved in the apoptosis-related resistance including cIAP-1, XIAP, Bcl-2, BAK and Survivin proteins. Last, colonogenic and MTT (3-(4,5-dimethylthiazol-2-yl)- 2,5-diphenyltetrazolium bromide) assays have also been performed. The results showed, regardless of the concentration used, GQDs, MSN and PLA were not cytotoxic to MDA-MB-231 cells and showed no impairment in the colony formation capacity. In addition, it has been observed that P-gp membrane expression was not significantly altered by any of the three nanomaterials. The results suggest that GQDs nanoparticles would be suitable for the delivery of other multidrug resistance protein 1 (MRP1) substrate drugs that bind to the transporter at the same binding pocket, while MSN can strongly inhibit doxorubicin efflux by MRP1. On the other hand, PLA showed moderate inhibition of doxorubicin efflux by MRP1 suggesting that this nanomaterial can also be useful to treat MDR (Multidrug resistance) due to MRP1 overexpression. View Full-Text
Keywords: cancer resistance; nanosystems; P-glycoprotein; multidrug resistance associated protein-1; graphene quantum dots; mesoporous silica nanoparticles; polymeric lactic acid nanoparticles cancer resistance; nanosystems; P-glycoprotein; multidrug resistance associated protein-1; graphene quantum dots; mesoporous silica nanoparticles; polymeric lactic acid nanoparticles
►▼ Show Figures 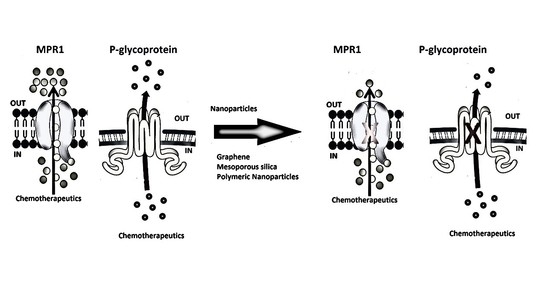