Cerato-Platanins from Marine Fungi as Effective Protein Biosurfactants and Bioemulsifiers

Two fungal strains, Aspergillus terreus MUT 271 and Trichoderma harzianum MUT 290, isolated from a Mediterranean marine site chronically pervaded by oil spills, can use crude oil as sole carbon source. Herein, these strains were investigated as producers of biosurfactants, apt to solubilize organic molecules as a preliminary step to metabolize them. Both fungi secreted low molecular weight proteins identified as cerato-platanins, small, conserved, hydrophobic proteins, included among the fungal surface-active proteins. Both proteins were able to stabilize emulsions, and their capacity was comparable to that of other biosurfactant proteins and to commercially available surfactants. Moreover, the cerato-platanin from T. harzianum was able to lower the surface tension value to a larger extent than the similar protein from A. terreus and other amphiphilic proteins from fungi. Both cerato-platanins were able to make hydrophilic a hydrophobic surface, such as hydrophobins, and to form a stable layer, not removable even after surface washing. To the best of our knowledge, the ability of cerato-platanins to work both as biosurfactant and bioemulsifier is herein demonstrated for the first time. View Full-Text
Keywords: cerato-platanin; surface tension; foam stabilizer; surface coating; hydrophobin cerato-platanin; surface tension; foam stabilizer; surface coating; hydrophobin
►▼ Show Figures 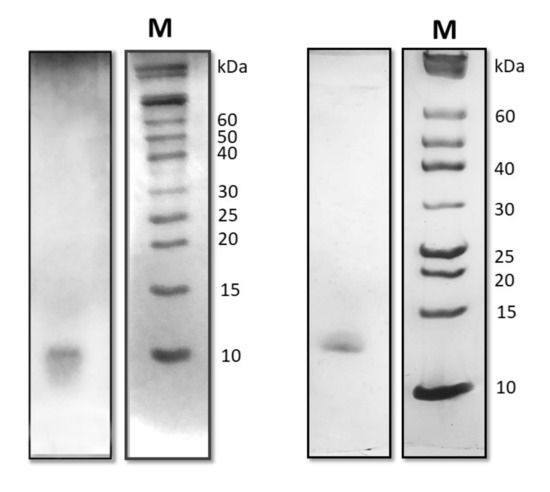