Sensitivity of the Fasciae to the Endocannabinoid System: Production of Hyaluronan-Rich Vesicles and Potential Peripheral Effects of Cannabinoids in Fascial Tissue

The demonstrated expression of endocannabinoid receptors in myofascial tissue suggested the role of fascia as a source and modulator of pain. Fibroblasts can modulate the production of the various components of the extracellular matrix, according to type of stimuli: physical, mechanical, hormonal, and pharmacological. In this work, fascial fibroblasts were isolated from small samples of human fascia lata of the thigh, collected from three volunteer patients (two men, one woman) during orthopedic surgery. This text demonstrates for the first time that the agonist of cannabinoid receptor 2, HU-308, can lead to in vitro production of hyaluronan-rich vesicles only 3–4 h after treatment, being rapidly released into the extracellular environment. We demonstrated that these vesicles are rich in hyaluronan after Alcian blue and Toluidine blue stainings, immunocytochemistry, and transmission electron microscopy. In addition, incubation with the antagonist AM630 blocked vesicles production by cells, confirming that release of hyaluronan is a cannabinoid-mediated effect. These results may show how fascial cells respond to the endocannabinoid system by regulating and remodeling the formation of the extracellular matrix. This is a first step in our understanding of how therapeutic applications of cannabinoids to treat pain may also have a peripheral effect, altering the biosynthesis of the extracellular matrix in fasciae and, consequently, remodeling the tissue and its properties. View Full-Text
Keywords: fascia; hyaluronan; vesicles; endocannabinoid; agonist; antagonist; inflammation; fibrosis; pain; peripheral effect fascia; hyaluronan; vesicles; endocannabinoid; agonist; antagonist; inflammation; fibrosis; pain; peripheral effect
►▼ Show Figures 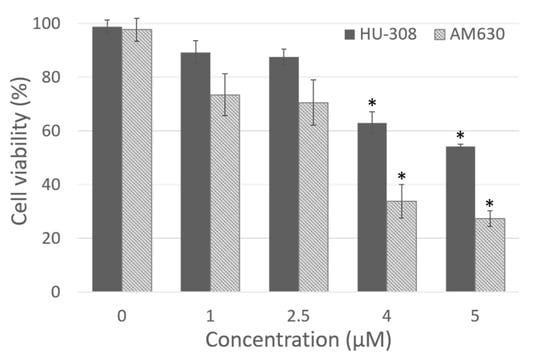