Preeclampsia is a pregnancy-specific disease of high prevalence characterized by the onset of hypertension, among other maternal or fetal signs. Its etiopathogenesis remains elusive, but it is widely accepted that abnormal placentation results in the release of soluble factors that cause the clinical manifestations of the disease. An increased level of soluble endoglin (sEng) in plasma has been proposed to be an early diagnostic and prognostic biomarker of this disease. A pathogenic function of sEng involving hypertension has also been reported in several animal models with high levels of plasma sEng not directly dependent on pregnancy. The aim of this work was to study the functional effect of high plasma levels of sEng in the pathophysiology of preeclampsia in a model of pregnant mice, in which the levels of sEng in the maternal blood during pregnancy replicate the conditions of human preeclampsia. Our results show that wild type pregnant mice carrying human sEng-expressing transgenic fetuses (fWT(hsEng+)) present high plasma levels of sEng with a timing profile similar to that of human preeclampsia. High plasma levels of human sEng (hsEng) are associated with hypertension, proteinuria, fetal growth restriction, and the release of soluble factors to maternal plasma. In addition, fWT(hsEng+) mice also present placental alterations comparable to those caused by the poor remodeling of the spiral arteries characteristic of preeclampsia. In vitro and ex vivo experiments, performed in a human trophoblast cell line and human placental explants, show that sEng interferes with trophoblast invasion and the associated pseudovasculogenesis, a process by which cytotrophoblasts switch from an epithelial to an endothelial phenotype, both events being related to remodeling of the spiral arteries. Our findings provide a novel and useful animal model for future research in preeclampsia and reveal a much more relevant role of sEng in preeclampsia than initially proposed. View Full-Text
Keywords: soluble endoglin; placenta; preeclampsia; murine model soluble endoglin; placenta; preeclampsia; murine model
►▼ Show Figures 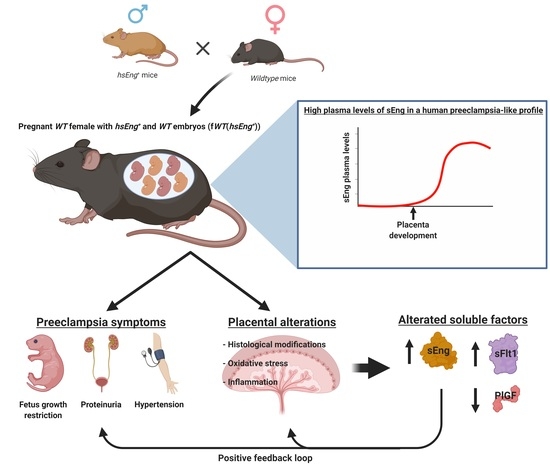