CB2 Receptor in Microglia: The Guardian of Self-Control
Next Article in Special Issue

Physiology, Biochemistry, and Pharmacology of Transporters for Organic Cations
Previous Article in Journal

Background: The muscarinic receptor antagonist trospium chloride (TCl) is used for pharmacotherapy of the overactive bladder syndrome. TCl is a hydrophilic positively charged drug. Therefore, it has low permeability through biomembranes and requires drug transporters for distribution and excretion. In humans, the organic cation transporters OCT1 and OCT2 and the multidrug and toxin extrusion MATE1 and MATE2-K carriers showed TCl transport. However, their individual role for distribution and excretion of TCl is unclear. Knockout mouse models lacking mOct1/mOct2 or mMate1 might help to clarify their role for the overall pharmacokinetics of TCl. Method: In preparation of such experiments, TCl transport was analyzed in HEK293 cells stably transfected with the mouse carriers mOct1, mOct2, mMate1, and mMate2, respectively. Results: Mouse mOct1, mOct2, and mMate1 showed significant TCl transport with Km values of 58.7, 78.5, and 29.3 µM, respectively. In contrast, mMate2 did not transport TCl but showed MPP+ transport with Km of 60.0 µM that was inhibited by the drugs topotecan, acyclovir, and levofloxacin. Conclusion: TCl transport behavior as well as expression pattern were quite similar for the mouse carriers mOct1, mOct2, and mMate1 compared to their human counterparts. View Full-Text
Keywords: trospium; transport; OCT; MATE; drug excretion; drug transport trospium; transport; OCT; MATE; drug excretion; drug transport
►▼ Show Figures 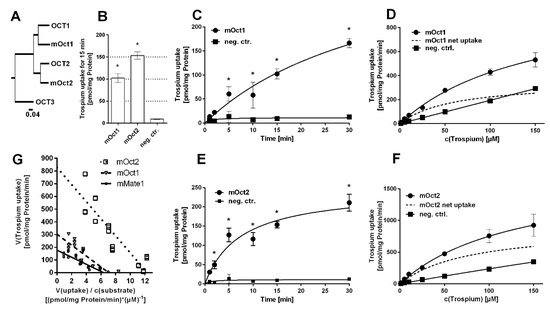