On the Optical Activity of Poly(l-lactic acid) (PLLA) Oligomers and Polymer: Detection of Multiple Cotton Effect on Thin PLLA Solid Film Loaded with Two Dyes
Next Article in Special Issue

CB2 Receptor in Microglia: The Guardian of Self-Control
Previous Article in Journal

The Immune Endocannabinoid System of the Tumor Microenvironment

Our laboratory and others have previously shown that cannabinoid receptor type-1 (CB1r) activity is neuroprotective and a modulator of brain ageing; a genetic disruption of CB1r signaling accelerates brain ageing, whereas the pharmacological stimulation of CB1r activity had the opposite effect. In this study, we have investigated if the lack of CB1r affects noradrenergic neurons in the locus coeruleus (LC), which are vulnerable to age-related changes; their numbers are reduced in patients with neurodegenerative diseases and probably also in healthy aged individuals. Thus, we compared LC neuronal numbers between cannabinoid 1 receptor knockout (Cnr1−/−) mice and their wild-type littermates. Our results reveal that old Cnr1−/− mice have less noradrenergic neurons compared to their age-matched wild-type controls. This result was also confirmed by the analysis of the density of noradrenergic terminals which proved that Cnr1−/− mice had less compared to the wild-type controls. Additionally, we assessed pro-inflammatory glial activity in the LC. Although the density of microglia in Cnr1−/− mice was enhanced, they did not show enhanced inflammatory profile. We hypothesize that CB1r activity is necessary for the protection of noradrenergic neurons, but its anti-inflammatory effect probably only plays a minor role in it. View Full-Text
Keywords: endocannabinoid system; stereological counting; noradrenergic neurons; ageing endocannabinoid system; stereological counting; noradrenergic neurons; ageing
►▼ Show Figures 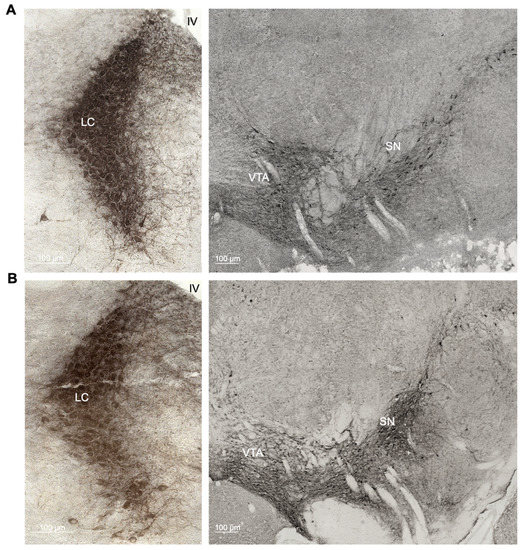