2.1. Identification of mRNA Expression of the Methionine Cycle Genes Signature for Survival in TGCA Dataset

The nucleus translocation of MAT2A has been proposed to enable epigenetic histone methylation maintenance during DNA replication in vitro [32]. The previous in vitro finding of MAT2A translocation in cancer cell lines as well as our findings on MAT2A mRNA and breast cancer survival inspired us to explore the prognostic potential and the clinical application of the subcellular localization of MAT2A in our breast cancer cohort study. We examined the specimens from 252 independent patients and compared the subcellular protein expression of GNMT, MAT1A, and MAT2A between the breast tumor and their paired normal breast tissues by Immunohistochemistry (IHC) analysis. The clinicopathological data are presented in Table 1, and representative IHC staining for each target molecule is shown in Figure 2A–C. The GNMT and MAT1A proteins were found exclusively in the cytoplasmic fraction of tumor and normal tissues (Figure 2A,B). In contrast, MAT2A protein were found in both nuclear (N) and cytoplasmic (C) fractions of the tumor and normal tissues (Figure 2C). IHC analysis revealed that GNMT was downregulated in breast tumor tissues compared with normal breast tissues (p = 0.004, Figure 2D). On the other hand, MAT1A was upregulated in breast cancerous tissues compared with normal breast tissues (p < 0.001, Figure 2E). Furthermore, cytoplasmic MAT2A was upregulated in breast cancer tissues compared with normal breast tissues (p < 0.001, Figure 2F). No statistical difference was found in nuclear MAT2A expression between normal and breast cancer tissues (Figure 2G).
IHC staining of tissue microarray discovered that a higher cytoplasmic/nuclear (C/N) ratio of MAT2A protein was observed in more (63.0%, 29/46) patients aged above 65 (p = 0.050, Table 1). On the other hand, low MAT1A protein expression was observed in more (63.0%, 29/46) patients aged above 65 (p = 0.050, Table 1).

2.3. Identification of a Gene Expression Signature for Survival

The GNMT and MAT1A protein expressions and the C/N ratio of MAT2A were also correlated with the five-year relative survival rate in our breast cancer cohort. Kaplan–Meier survival analyses were performed after the samples were classified into high- and low-expression groups according to the median scores, and stage status was used to evaluate the prognosis of the patients within this period [33]. As shown in Figure 3A, patients in stage III and IV tumors had a poorer survival than those in stage I and II (p < 0.001). Patients aged 65 and above were associated with a significant increase in 5 years mortality rate compared with those aged below 65 (p < 0.001, Figure 3B). Patients with positive expression of ER were associated with significantly improved breast cancer survival rate compared with those with negative ER (p < 0.001, Figure 3C). Higher C/N ratio of MAT2A in the tumorous tissues was associated with poorer survival (p = 0.004, Figure 3F). Neither GNMT (Figure 3G) nor MAT1A (Figure 3H) protein expression was associated with patient survival rate in our cohort.
Furthermore, multivariate logistic-regression analysis indicated that a higher MAT2A C/N ratio significantly correlated with poorer survival (hazard ratio = 2.771, 95% confidence interval (CI) 1.186–6.472) (Table 2). Taken together, high C/N ratio of MAT2A in the tumorous tissues of breast cancer patients is associated with poor prognosis that is independent of age, ER, and tumor-node-metastasis (TNM) stages.
In addition to the potential epigenetic regulation of histone, MAT2A may affect cancer progression via its interactions with other nuclear proteins. The oncogene P53 and DNA Damage Regulated 1 (PDRG1) encoded protein PDRG1 has been reported as an interaction target of methionine adenosyltransferases in the control of the nuclear methylation status [34]. Therefore, we further examined the clinical relevance of PDG1 in breast cancer. Kaplan–Meier analysis using the dataset in GEPIA indicated no significant correlation between PDRG1 mRNA expression and breast cancer patient survival (Figure 4).

To investigate MAT2A subcellular localization in human breast cancer cells and explore whether they are potentially involved in cancer cell invasion, we compared the MAT2A protein levels in the cytoplasm and nucleus (Figure 5A) as well as the invasiveness (Figure 5B) in a panel of breast cancer cell lines. MAT2A protein were detected in both the cytoplasm and nucleus of MCF7, Hs578T, MDA-MB-231, and BT549. Protein quantification and MAT2A C/N ratio values were calculated by Image J and are shown in Figure 5A. Our data indicated that a higher MAT2A C/N and/or lower nuclear MAT2A expression may be related to increased invasiveness. Cell lines with higher MAT2A C/N (Hs578T andMDA-MB231) were more invasive, whereas MCF7 that had the lowest C/N ratio were the least invasive (Figure 5B).

The expression analysis of GNMT, MAT1A and MAT2A mRNA in breast tumor and breast normal tissues was calculated using ANOVA. The Kaplan–Meier survival analysis of GNMT, MAT1A, and MAT2A mRNA expression was performed on the BRCA RNA-seq data of the TCGA/GTEx datasets available within GEPIA2, by autoselecting the median values between the lower and upper quartiles into high and low expression. More information can be found at http://gepia2.cancer-pku.cn/#index (accessed on 25 October 2020) [44].

Contralateral primary breast tumor and adjacent normal breast tissues of 252 breast cancer patients receiving surgical resection were acquired from Changhua Show Chwan Memorial Hospital from March 2011 to January 2017. Computed tomography (CT) was applied for diagnosis in the 265 breast cancer patients prior to surgery. The diagnosis parameters and clinical outcomes were recruited until patient death or loss to follow-up. The age of all patients was between 29 and 95 years (mean ± SD = 54.88 ± 12.32). Clinical parameters and survival data were recorded from the cancer registry system of Changhua Show Chwan Memorial Hospital. Survival data was annotated to be the following time from the date of primary surgery to the date of death. During this survey, 30 patients died and 42 patients exhibited tumor metastasis, with the metastasis sites, including skin, abdomen, pleura, bone, lung, liver, chest wall, breast, and lymph node. The median overall survival of all breast cancer patients was 48 months. This project was approved by the Ethics Committee of the Institutional Review Board of Show Chwan Memorial Hospital (IRB No. 1060407, 7 April 2017).

Cell invasion was investigated using Matrigel invasion chambers with a pore size of 8 μm (Costar; Corning Life Sciences, Cambridge, MA, USA). Briefly, MCF7, Hs578T, MDA-MB-231, and BT549 cells (4 × 104 cells per chamber) in serum-free medium were seeded in the upper chamber, and 10% fetal bovine serum (FBS) (Gibco; Thermo Fisher Scientific, Inc., Waltham, MA, USA) was used as a chemoattractant in the bottom well. After incubation for 24 h at 37 °C, the non-invasive cells on the upper surface of the membrane were removed with a cotton swab, and the invasive cells on the bottom side were fixed in 100% methanol at room temperature for 5 min, stained with 1% crystal violet at room temperature for 10 min and counted using a microscope (Nikon Eclipse80i; Nikon Corporation, Melville, NY, USA) under ×200 magnification with five fields of view per cells.

The association between GNMT, MAT1A, and MAT2A protein expression and the clinical and pathological parameters was calculated using Chi-square and paired-sample t-tests, and survival curves were plotted using the Kaplan–Meier method and compared using log-rank test. Cox’s proportional hazards regression model was used to analyze the association between the variables and survival data. p < 0.05 was considered to indicate a statistically significant difference. by SPSS 18.0 (SPSS, Inc., Chicago, IL, USA) was used for all statistical analyses.

This project was approved by the Ethics Committee of the Institutional Review Board of Show Chwan Memorial Hospital (IRB No. 1060407). 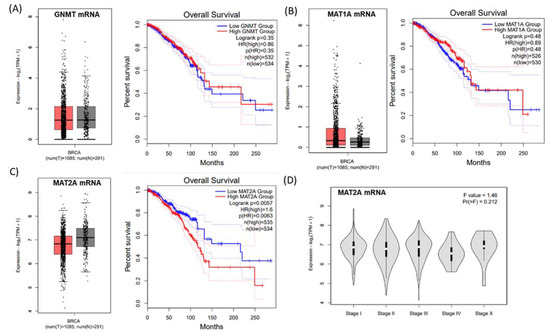 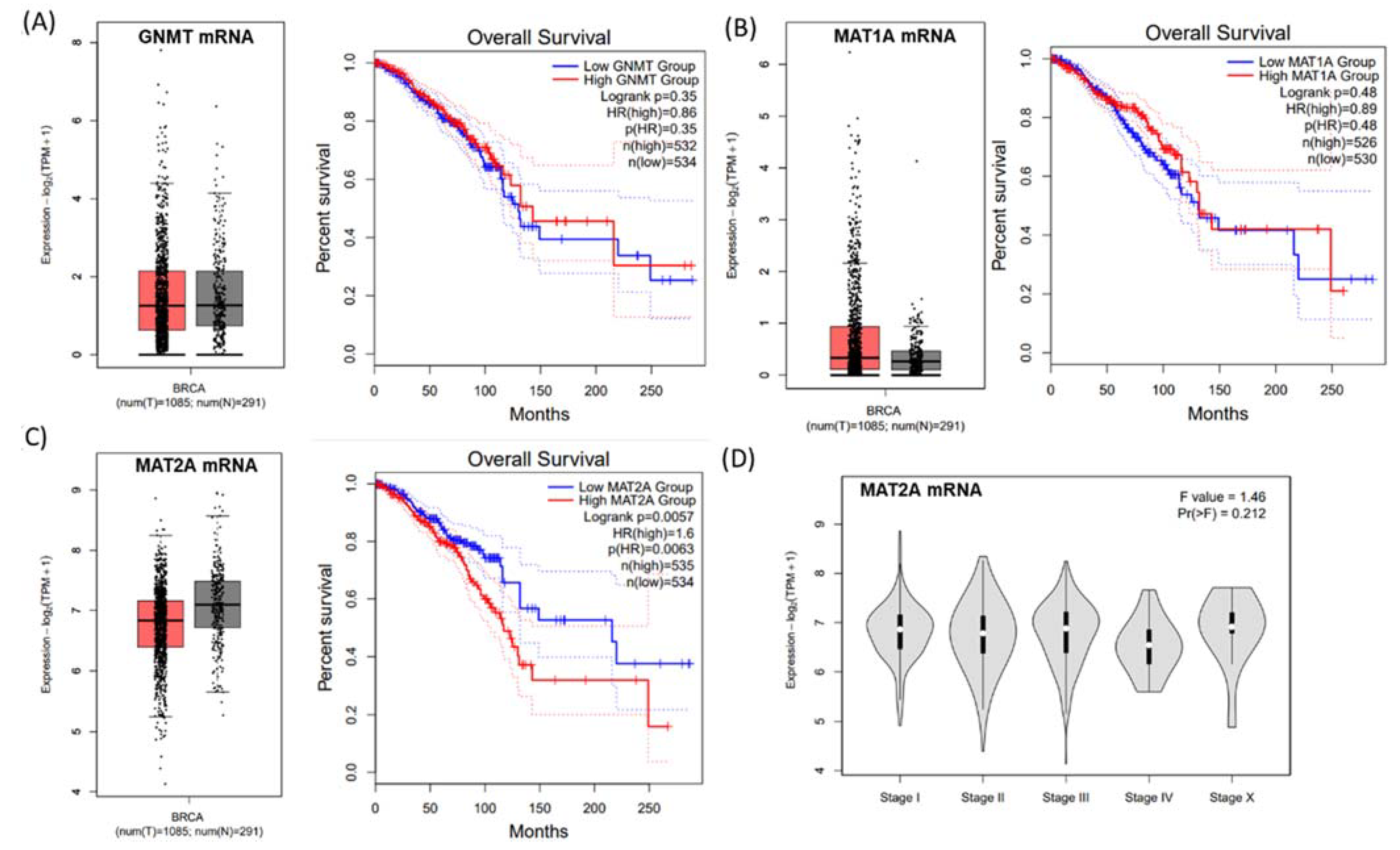 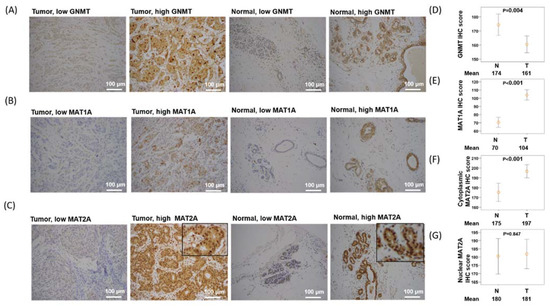 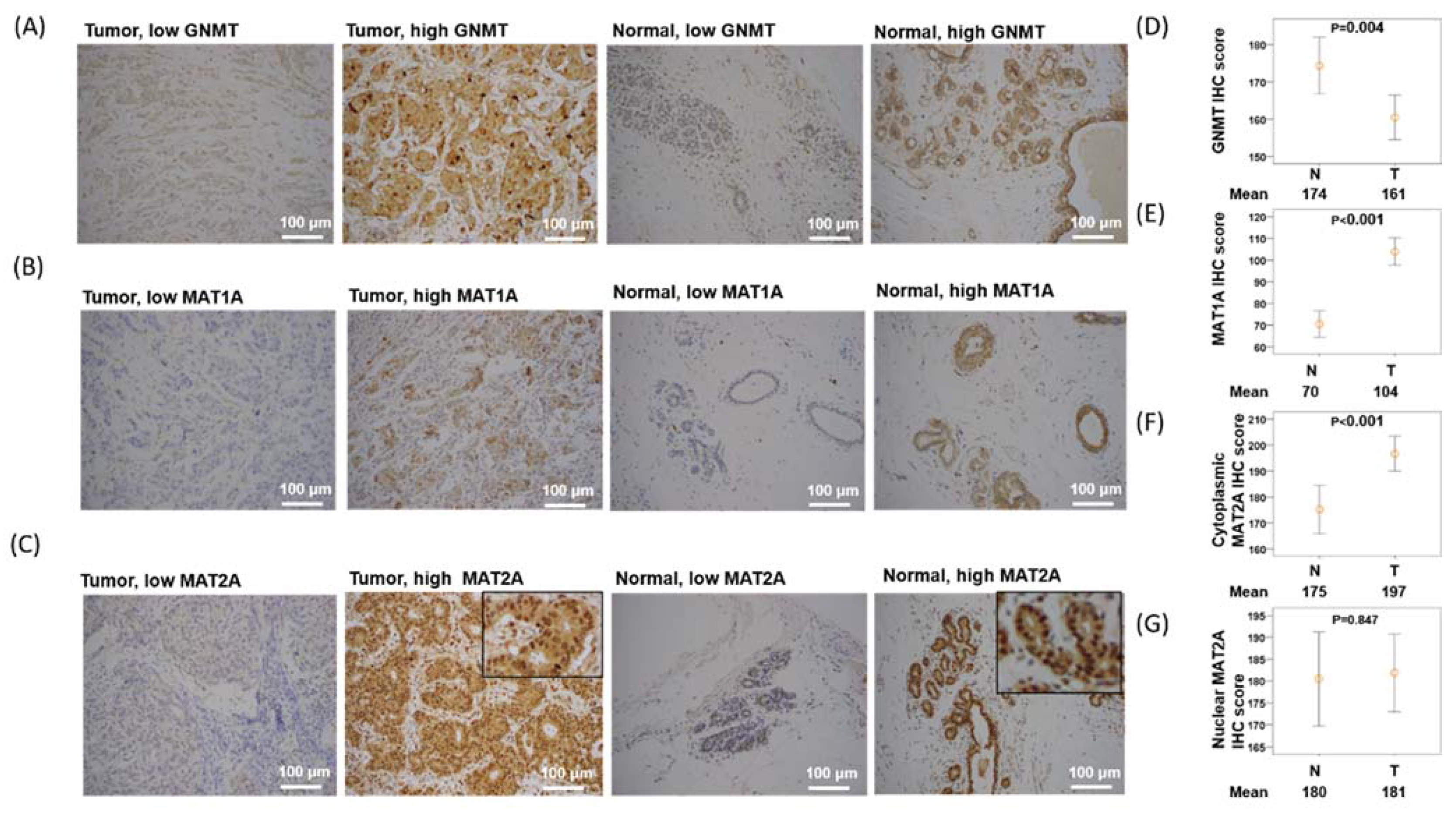 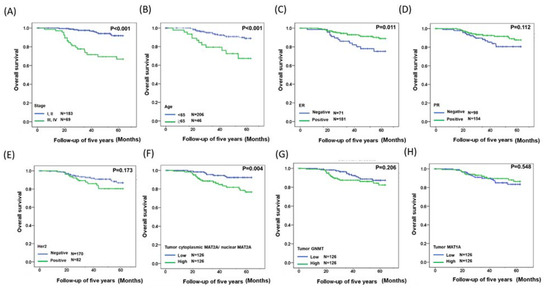 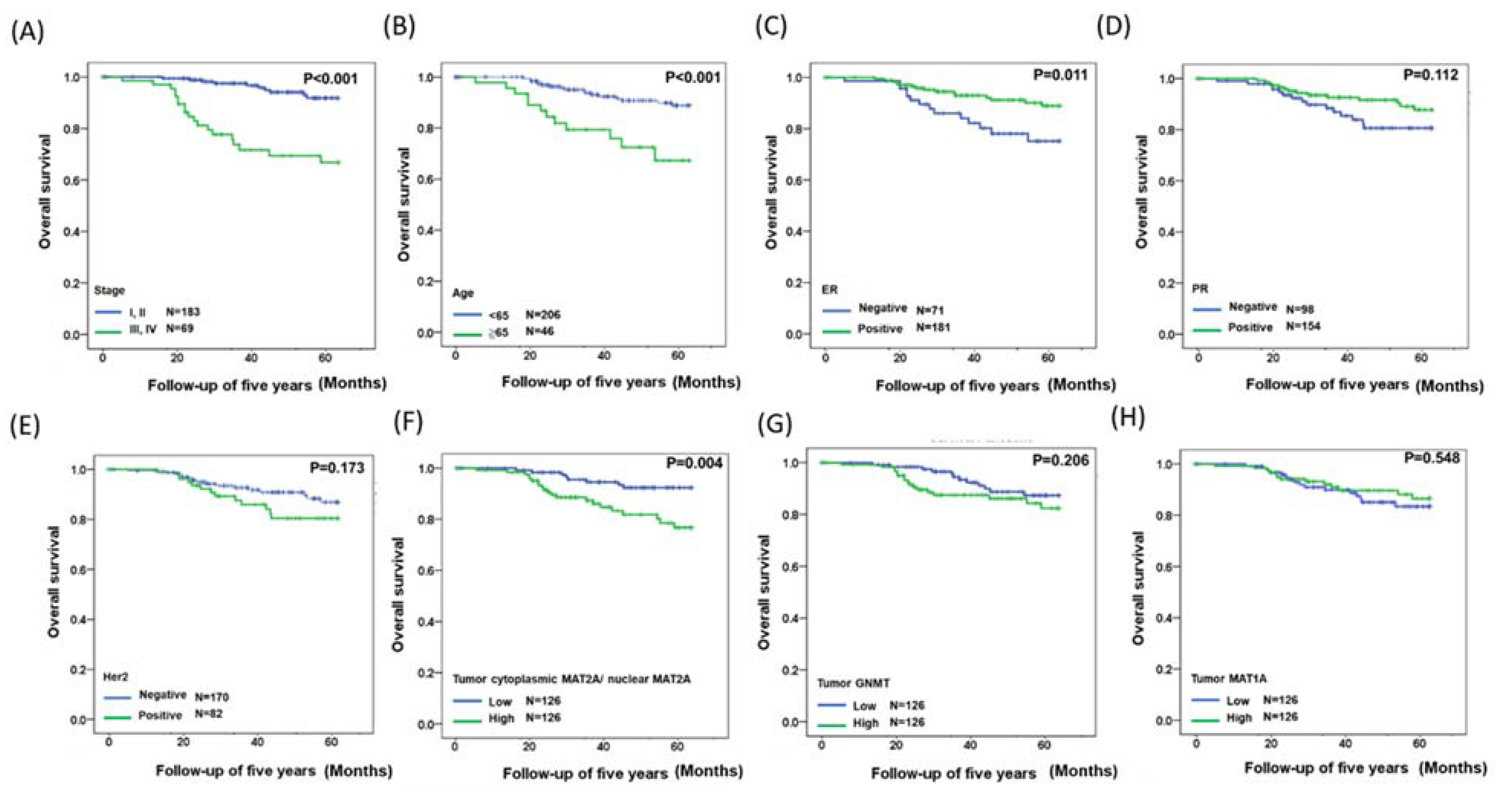 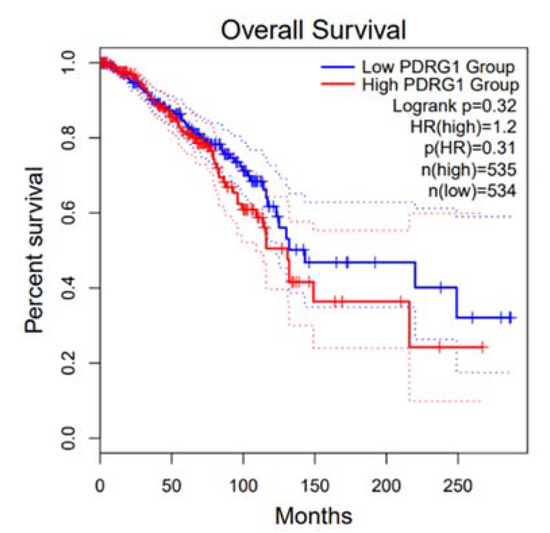 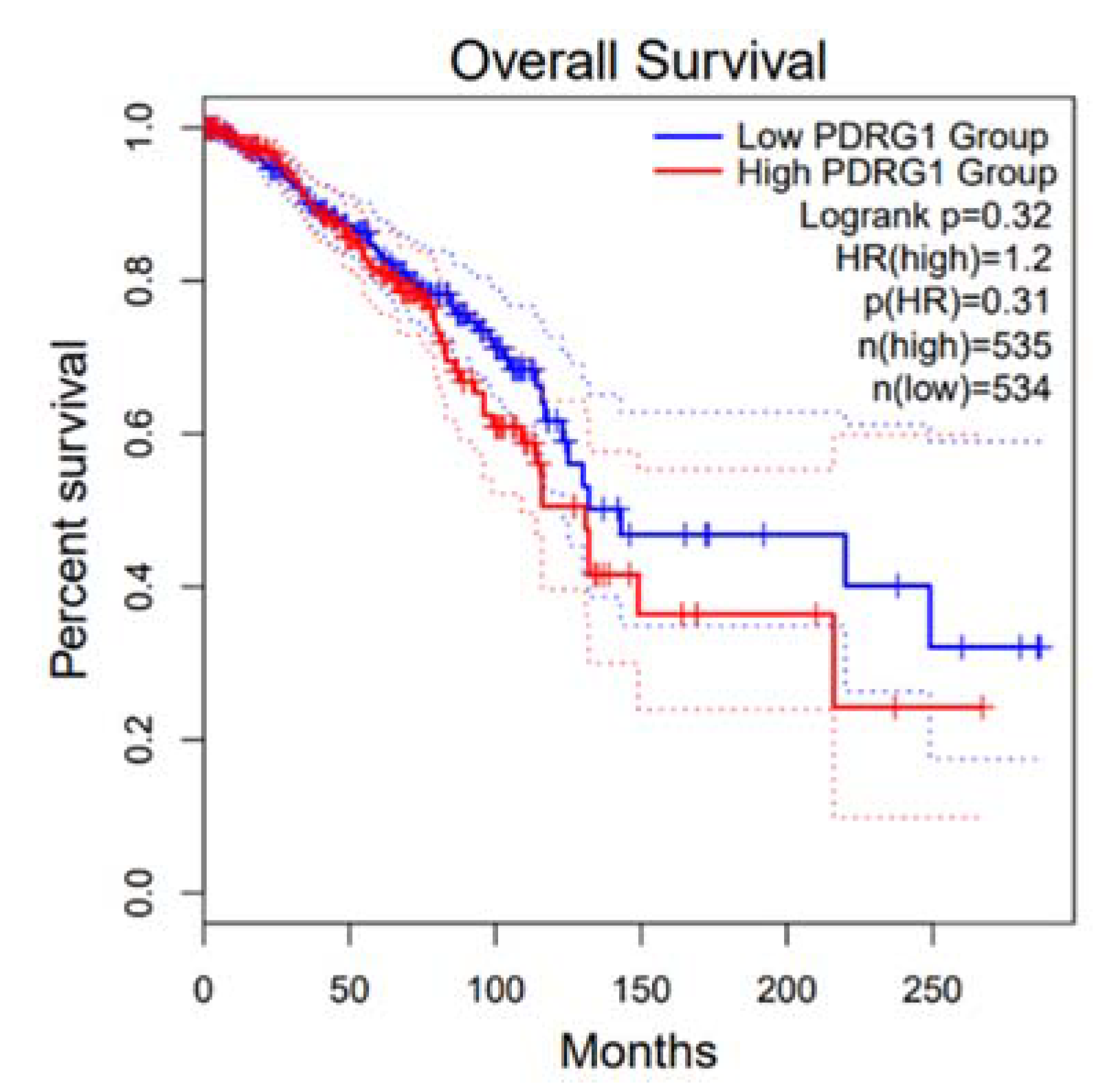 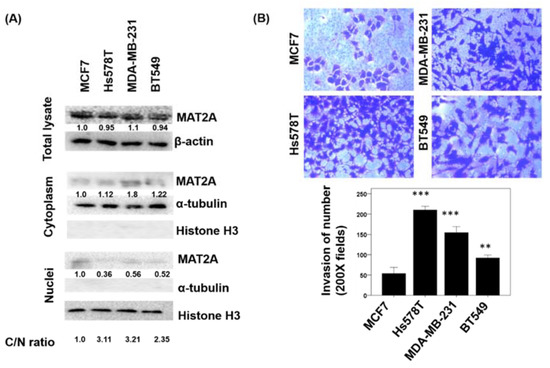 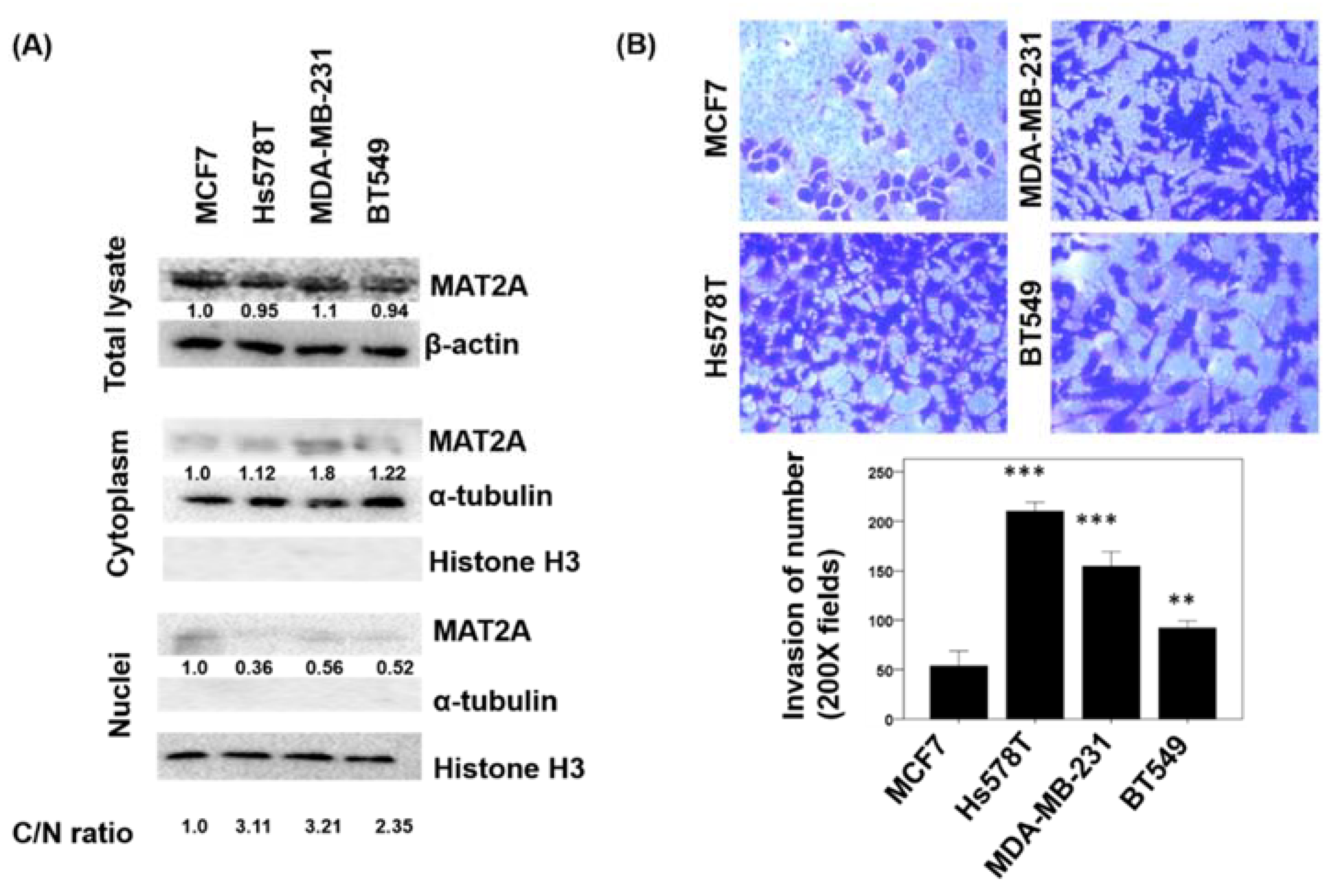