Targeting Fibrosis: The Bridge That Connects Pancreatitis and Pancreatic Cancer

In certain diseases of the pancreas, pancreatic stellate cells form an important part of fibrosis and are critical for the development of cancer cells. A hypoxic condition develops within the tumor, to which pancreatic stellate cells adapt and are able to proliferate. The consequence is the growth of the tumor. Melatonin, the product of the pineal gland, is gaining attention as an agent with therapeutic potential against pancreatic cancers. Its actions on tumor cells lead, in general, to a reduction in cell viability and proliferation. However, its effects on pancreatic stellate cells subjected to hypoxia are less known. In this study, we evaluated the actions of pharmacological concentrations of melatonin (1 mM–1 µM) on pancreatic stellate cells subjected to hypoxia. The results show that melatonin induced a decrease in cell viability at the highest concentrations tested. Similarly, the incorporation of BrdU into DNA was diminished by melatonin. The expression of cyclins A and D also was decreased in the presence of melatonin. Upon treatment of cells with melatonin, increases in the expression of major markers of ER stress, namely BIP, phospho-eIF2α and ATF-4, were detected. Modulation of apoptosis was noticed as an increase in caspase-3 activation. In addition, changes in the phosphorylated state of p44/42, p38 and JNK MAPKs were detected in cells treated with melatonin. A slight decrease in the content of α-smooth muscle actin was detected in cells treated with melatonin. Finally, treatment of cells with melatonin decreased the expression of matrix metalloproteinases 2, 3, 9 and 13. Our observations suggest that melatonin, at pharmacological concentrations, diminishes the proliferation of pancreatic stellate cells subjected to hypoxia through modulation of cell cycle, apoptosis and the activation of crucial MAPKs. Cellular responses might involve certain ER stress regulator proteins. In view of the results, melatonin could be taken into consideration as a potential therapeutic agent for pancreatic fibrosis. View Full-Text
Keywords: apoptosis; fibrosis; hypoxia; mitogen-activated protein kinases; melatonin; pancreatic stellate cells apoptosis; fibrosis; hypoxia; mitogen-activated protein kinases; melatonin; pancreatic stellate cells
►▼ Show Figures 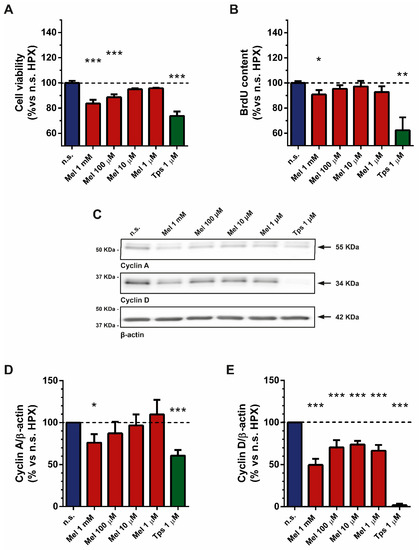