Structural disturbances of the subchondral bone are a hallmark of osteoarthritis (OA), including sclerotic changes, cystic lesions, and osteophyte formation. Osteocytes act as mechanosensory units for the micro-cracks in response to mechanical loading. Once stimulated, osteocytes initiate the reparative process by recruiting bone-resorbing cells and bone-forming cells to maintain bone homeostasis. Osteocyte-expressed sclerostin is known as a negative regulator of bone formation through Wnt signaling and the RANKL pathway. In this review, we will summarize current understandings of osteocytes at the crossroad of allometry and mechanobiology to exploit the relationship between osteocyte morphology and function in the context of joint aging and osteoarthritis. We also aimed to summarize the osteocyte dysfunction and its link with structural and functional disturbances of the osteoarthritic subchondral bone at the molecular level. Compared with normal bones, the osteoarthritic subchondral bone is characterized by a higher bone volume fraction, a larger trabecular bone number in the load-bearing region, and an increase in thickness of pre-existing trabeculae. This may relate to the aberrant expressions of sclerostin, periostin, dentin matrix protein 1, matrix extracellular phosphoglycoprotein, insulin-like growth factor 1, and transforming growth factor-beta, among others. The number of osteocyte lacunae embedded in OA bone is also significantly higher, yet the volume of individual lacuna is relatively smaller, which could suggest abnormal metabolism in association with allometry. The remarkably lower percentage of sclerostin-positive osteocytes, together with clustering of Runx-2 positive pre-osteoblasts, may suggest altered regulation of osteoblast differentiation and osteoblast-osteocyte transformation affected by both signaling molecules and the extracellular matrix. Aberrant osteocyte morphology and function, along with anomalies in molecular signaling mechanisms, might explain in part, if not all, the pre-osteoblast clustering and the uncoupled bone remodeling in OA subchondral bone. View Full-Text
Keywords: osteoarthritis; osteocyte; bone remodeling; articular cartilage; sclerostin osteoarthritis; osteocyte; bone remodeling; articular cartilage; sclerostin
►▼ Show Figures 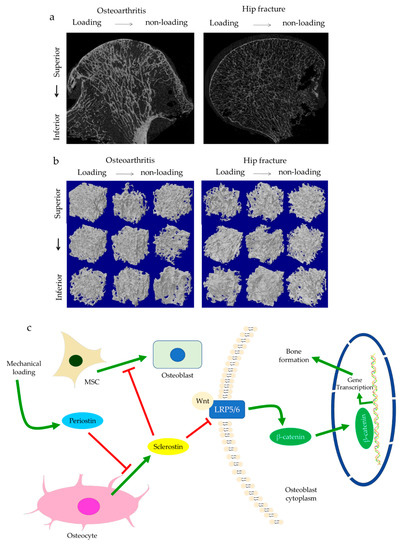