Calcium and Heart Failure: How Did We Get Here and Where Are We Going?
Next Article in Special Issue

[68Ga]Ga-DFO-c(RGDyK): Synthesis and Evaluation of Its Potential for Tumor Imaging in Mice
Previous Article in Special Issue

Cannabinoid Receptors in Myocardial Injury: A Brother Born to Rival

The same analysis was performed on maximum values of POMS subscales, separating subjects by rs2023239 genotype, and the results are displayed in Figure 5. Similar to previous results, there is a trend towards higher POMS subscale maximum values in minor allele C carriers. However, following univariate ANOVA analysis, none of the subscales exhibited statistically significant differences by genotype.
Split-plot ANOVA analyses were conducted to analyze the genotypic significance of POMS scores between baseline and 1 h post-cannabis exposure. Following split-plot ANOVA analyses, none of the POMS subscales displayed significant changes between genotypic groups.

Blood samples for genetic analysis were collected during the clinical trial entitled, Acute and residual effects of cannabis on young drivers’ performance of driving related skills (herein referred to as CADRI). The CADRI study was approved by the CAMH Research Ethics Board and Health Canada Ethics Board, and was a double-blinded, placebo-controlled mixed-design study with the primary objective of studying the acute and residual effects of a moderate dose of smoked cannabis (12.5% THC) and its effects on driving behaviour and performance in a laboratory setting [34,35]. One of the secondary aims of the CADRI trial was to study whether a relationship exists between genetics and the subjective effects of smoked cannabis. Informed consent was obtained prior to commencement of the CADRI eligibility assessment and the informed consent form included a supplemental request for the participant to provide two additional blood samples (~20 mL) for use in future genetic analyses.
The CADRI study population was composed of healthy young adults (males and females) that were aged 19–25, held a valid driver’s license, and were regular cannabis users (1–4 days per week). Potential participants were recruited from community advertisements within the Greater Toronto Area and initially underwent a telephone eligibility screen with a member of the study team and attended CAMH for an eligibility assessment. Participants were excluded if they were regular users of medications that affect brain function (i.e., antidepressants, benzodiazepines, stimulants, etc.), had been diagnosed with severe medical or psychiatric conditions, were pregnant, trying to become pregnant, breastfeeding, or met criteria for lifetime substance dependence (Structured Clinical Interview for DSM-IV Axis I Disorders), including cannabis. Once enrolled, participants were randomized into active and placebo groups in a 2:1 allocation ratio to maximize active group participants. Participants were asked to abstain from cannabis use 48 h prior to, and during the course of the trial.
Active cannabis (12.5% THC) was obtained from Prairie Plant Systems (Saskatoon, SK, Canada) and matching placebo cannabis (<0.1% THC) was obtained from the National Institute on Drug Abuse (NIDA) (North Bethesda, MD, USA). Each cigarette contained 750 mg of plant material. Subjects were escorted to a reverse airflow room that facilitated external ventilation of expired smoke. Subjects smoked alone and were instructed to smoke as they usually do for a maximum of 10 min and were told to stop smoking if they felt ill or achieved a high greater than they would normally experience. At the end of the smoking period, unsmoked cannabis cigarette remnants were collected and weighed. Estimated THC dosage was then calculated by subtracting this weight from 750 mg and multiplying by the 12.5% THC concentration. The acute intoxication period was defined up until 6 h post-administration and subjects returned and underwent assessment at 24 and 48 h post-dose.
During the CADRI study, the following data were collected to measure the subjective effects participants experienced from smoked cannabis:
For those participants that consented during the eligibility assessment to the supplemental study of genetic influences on the effects of cannabis, an additional 20 mL of blood was drawn during the baseline blood draw of the Testing Day 1 session and DNA was extracted.

Following CAMH Research Ethics Board approval, a genotyping experiment was performed on the DNA samples of consenting participants. The Infinium Global Screening Array (GSA) ChiP microarray from Illumina (San Diego, CA, USA) was used to genotype specific polymorphic sites that have been associated with cannabis use, abuse, and variable subjective response, with a primary focus on the rs1049353 and rs2023239 SNPs of the cannabinoid receptor 1 (CNR1) gene. The GSA data went through the following quality control steps: matching between self-reported sex and genotype-predicted sex, SNP-level and subject-level missingness of less than 5%, SNP minor allele frequencies of at least 5%, SNP genotypes not deviating significantly from the Hardy–Weinberg Equilibrium (p > 5 × 10−8), subject heterozygosity of less than four standard deviations from the mean, checking for related subjects, and ancestry of the subjects.

The CADRI study was supported by a Canadian Institutes of Health Research operating grant (FRN114939). Additional support for the work was provided by the Canada Foundation for Innovation and the NIDA Drug Supply Program from the National Institute on Drug Abuse (placebo cigarettes). B.L.F. is supported by a Clinician-scientist Award from the Department of Family and Community Medicine and from the Addiction Psychiatry Chair from the Department of Psychiatry at the University of Toronto.

The study was conducted according to the guidelines of the Declaration of Helsinki, and approved by the the Centre for Addiction and Mental Health Research Ethics Board (097/2019, approved 18 November 2019).

The data presented in this study are available on request from the corresponding author. The data are not publicly available due to study participant confidentiality mandates.

The authors declare no conflict of interest. B.L.F. has obtained funding from Pfizer (GRAND Awards, including salary support) for investigator-initiated projects. B.L.F. has some in-kind donation of cannabis product from Prairie Plant System/Aurora and medication donation from Pfizer and Bioprojet and was provided a coil for TMS study from Brainsway. B.L.F. has obtained industry funding from Canopy (through research grants handled by CAMH or University of Toronto), Bioprojet, ACS and Alkermes. B.L.F. has received in-kind donations of nabiximols from GW Pharma for past studies funded by CIHR and NIH. He has been consultant for Shionogi on a topic unrelated to current work. 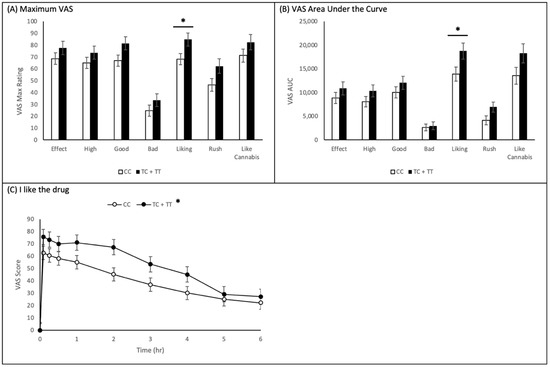 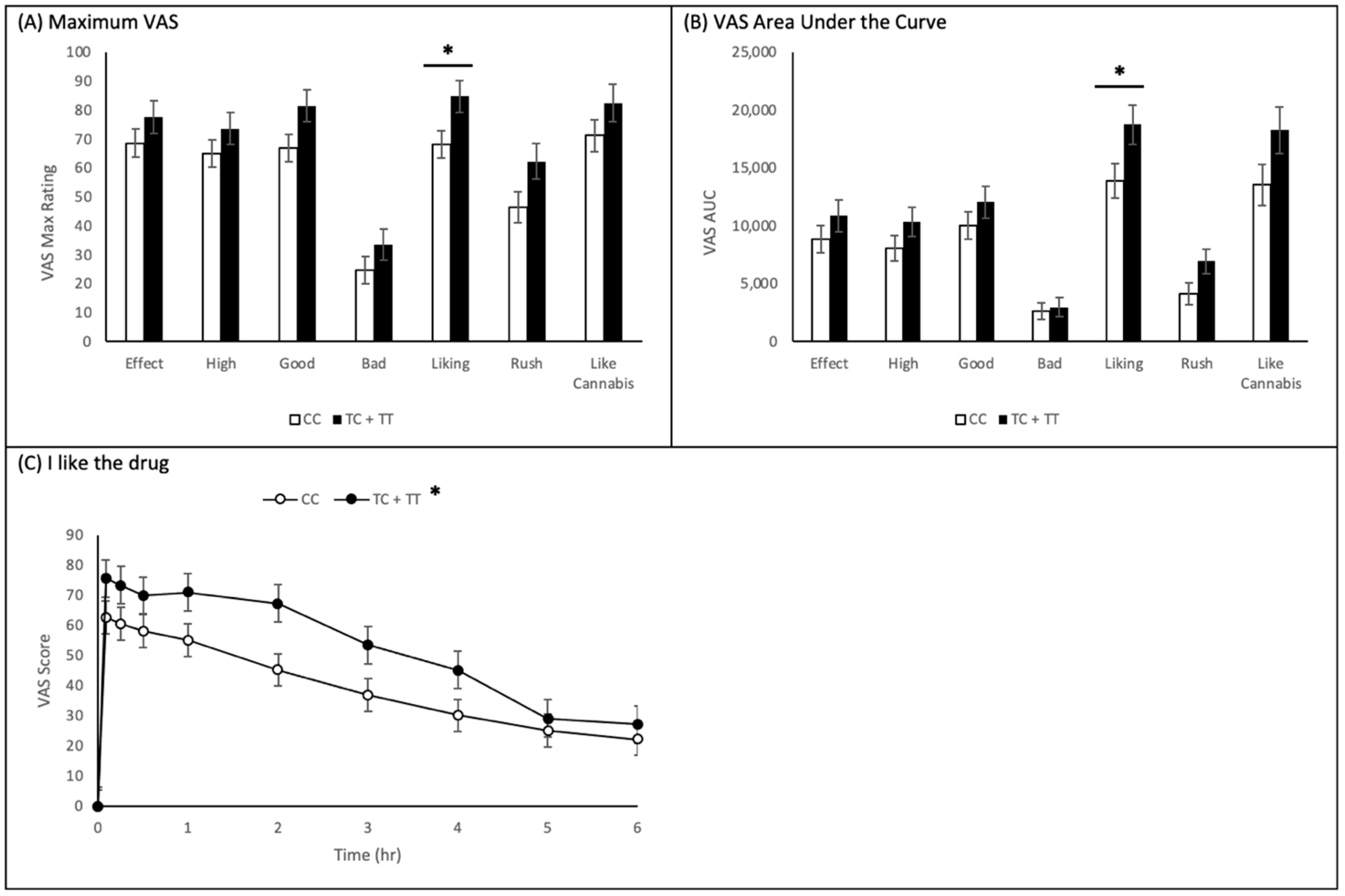 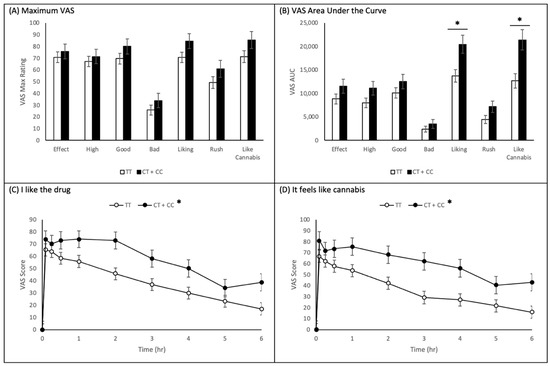 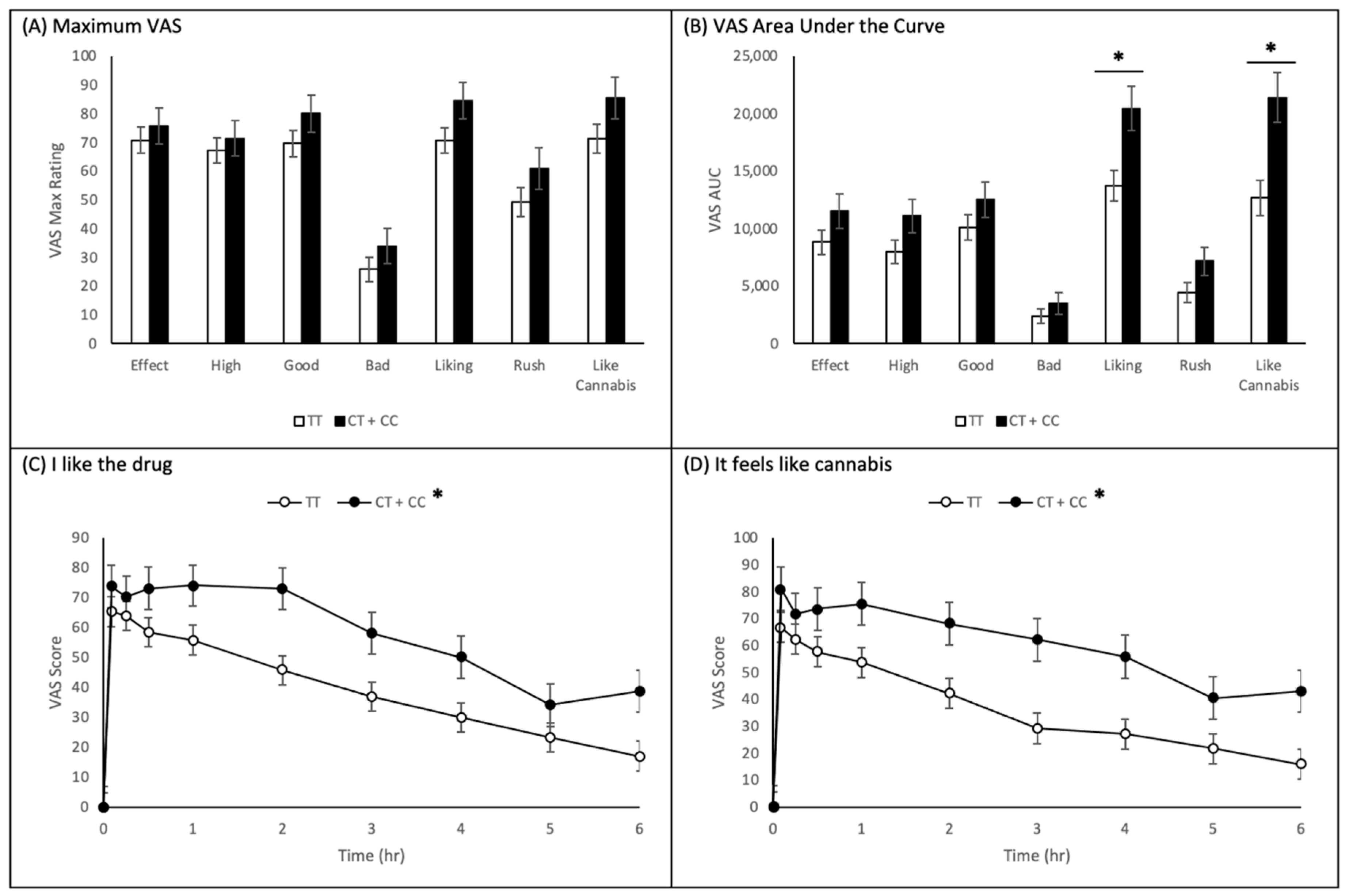 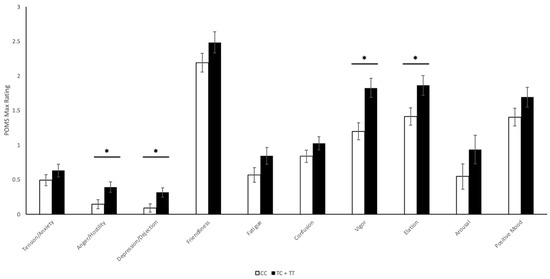 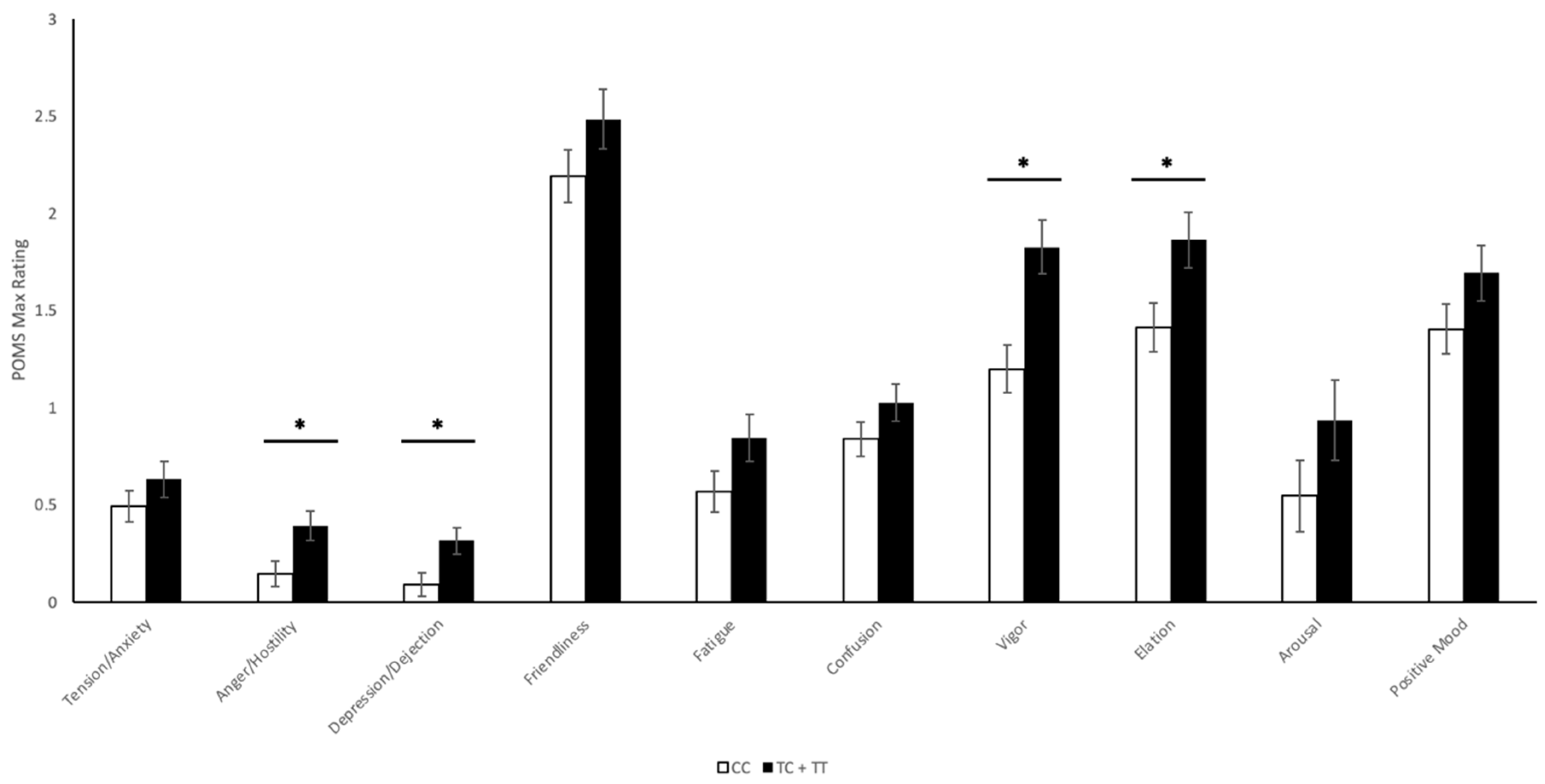 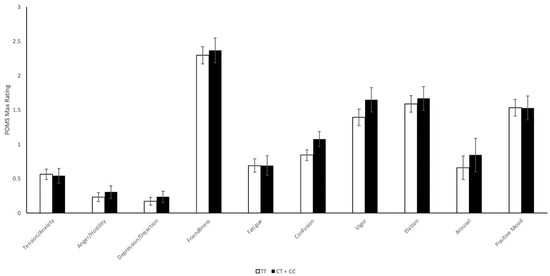 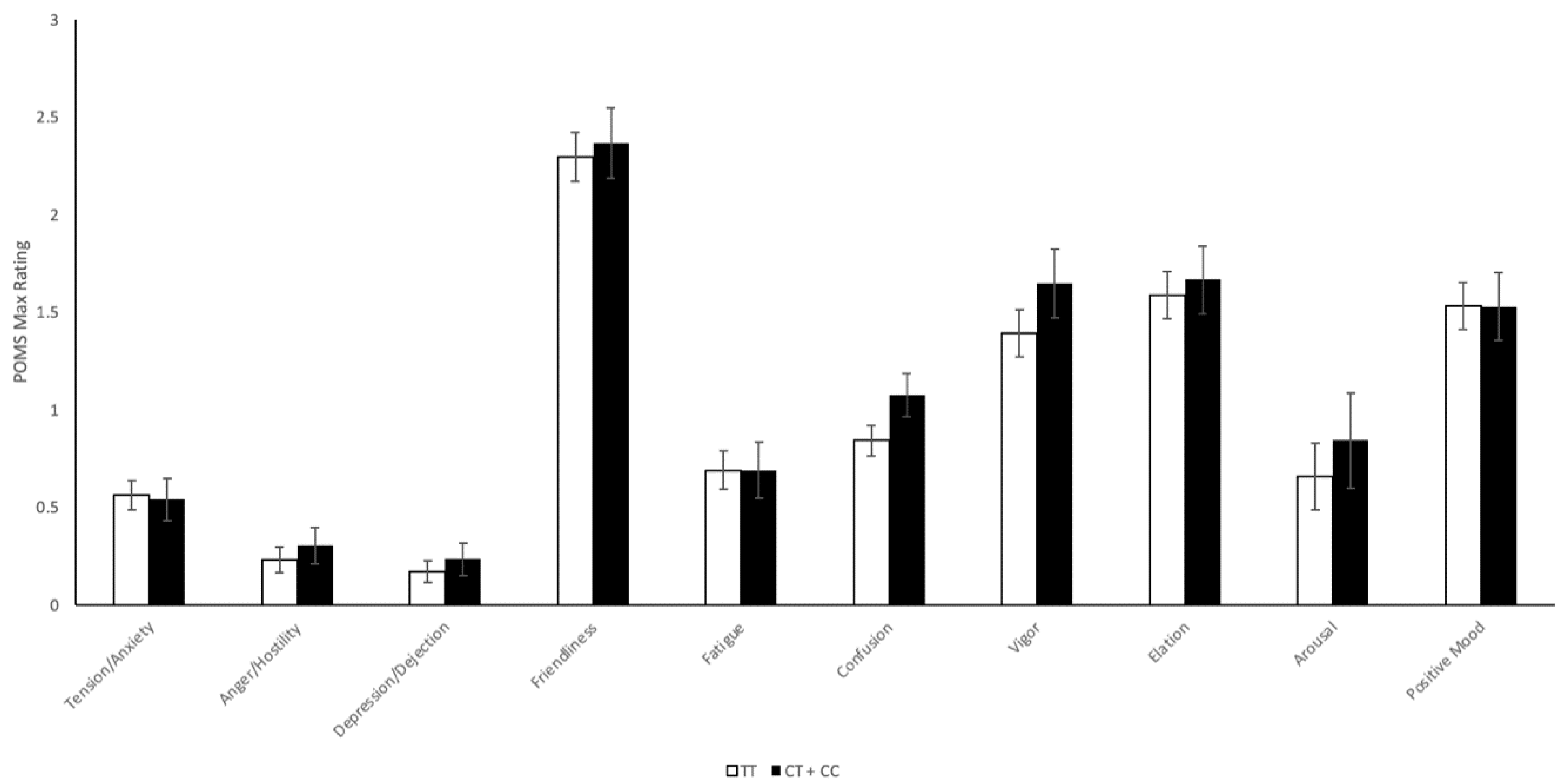