Calcium and Heart Failure: How Did We Get Here and Where Are We Going?

Osteoporosis is the most common metabolic bone disorder and nitrogen-containing bisphosphonates (BP) are a first line treatment for it. Yet, atypical femoral fractures (AFF), a rare adverse effect, may appear after prolonged BP administration. Given the low incidence of AFF, an underlying genetic cause that increases the susceptibility to these fractures is suspected. Previous studies uncovered rare CYP1A1 mutations in osteoporosis patients who suffered AFF after long-term BP treatment. CYP1A1 is involved in drug metabolism and steroid catabolism, making it an interesting candidate. However, a functional validation for the AFF-associated CYP1A1 mutations was lacking. Here we tested the enzymatic activity of four such CYP1A1 variants, by transfecting them into Saos-2 cells. We also tested the effect of commonly used BPs on the enzymatic activity of the CYP1A1 forms. We demonstrated that the p.Arg98Trp and p.Arg136His CYP1A1 variants have a significant negative effect on enzymatic activity. Moreover, all the BP treatments decreased CYP1A1 activity, although no specific interaction with CYP1A1 variants was found. Our results provide functional support to the hypothesis that an additive effect between CYP1A1 heterozygous mutations p.Arg98Trp and p.Arg136His, other rare mutations and long-term BP exposure might generate susceptibility to AFF. View Full-Text
Keywords: CYP1A1; osteoporosis; atypical femoral fractures; bisphosphonates CYP1A1; osteoporosis; atypical femoral fractures; bisphosphonates
►▼ Show Figures 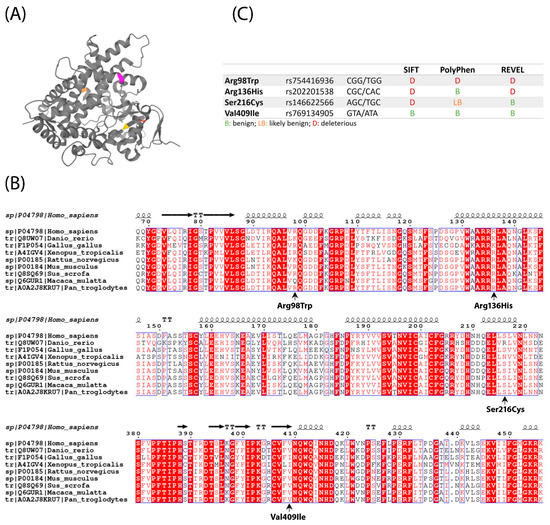