The Structural Effect of FLT3 Mutations at 835th Position and Their Interaction with Acute Myeloid Leukemia Inhibitors: In Silico Approach

Seaweeds are one of the largest producers of biomass in the marine environment and a source of multiple bioactive metabolites with valuable health benefits. Among these, phlorotannins have been widely recognized for their promising bioactive properties. The potential antitumor capacity of Fucus vesiculosus-derived phlorotannins remains, however, poorly explored, especially in gastrointestinal tract-related tumors. Therefore, this work aimed to evaluate the cytotoxic properties and possible mechanisms by which F. vesiculosus crude extract (CRD), phlorotannin-rich extract (EtOAc), and further phlorotannin-purified fractions (F1–F9) trigger cell death on different tumor cell lines of the gastrointestinal tract, using flow cytometry. The results indicate that F. vesiculosus samples exert specific cytotoxicity against tumor cell lines without affecting the viability of normal cells. Moreover, it was found that, among the nine different phlorotannin fractions tested, F5 was the most active against both Caco-2 colorectal and MKN-28 gastric cancer cells, inducing death via activation of both apoptosis and necrosis. The UHPLC-MS analysis of this fraction revealed, among others, the presence of a compound tentatively identified as eckstolonol and another as fucofurodiphlorethol, which could be mainly responsible for the promising cytotoxic effects observed in this sample. Overall, the results herein reported contribute to a better understanding of the mechanisms behind the antitumor properties of F. vesiculosus phlorotannin-rich extracts. View Full-Text
Keywords: Fucus vesiculosus; phlorotannins; antitumor; gastric cancer; colorectal cancer; cell cycle arrest; apoptosis; UHPLC; flow cytometry Fucus vesiculosus; phlorotannins; antitumor; gastric cancer; colorectal cancer; cell cycle arrest; apoptosis; UHPLC; flow cytometry
►▼ Show Figures 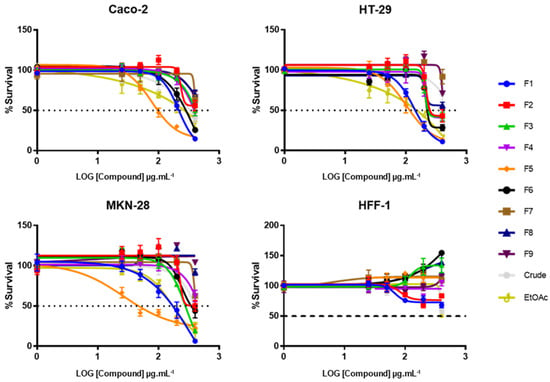