The Role of TRPM2 in Endothelial Function and Dysfunction

The transient receptor potential (TRP) melastatin-like subfamily member 2 (TRPM2) is a non-selective calcium-permeable cation channel. It is expressed by many mammalian tissues, including bone marrow, spleen, lungs, heart, liver, neutrophils, and endothelial cells. The best-known mechanism of TRPM2 activation is related to the binding of ADP-ribose to the nudix-box sequence motif (NUDT9-H) in the C-terminal domain of the channel. In cells, the production of ADP-ribose is a result of increased oxidative stress. In the context of endothelial function, TRPM2-dependent calcium influx seems to be particularly interesting as it participates in the regulation of barrier function, cell death, cell migration, and angiogenesis. Any impairments of these functions may result in endothelial dysfunction observed in such conditions as atherosclerosis or hypertension. Thus, TRPM2 seems to be an attractive therapeutic target for the conditions connected with the increased production of reactive oxygen species. However, before the application of TRPM2 inhibitors will be possible, some issues need to be resolved. The main issues are the lack of specificity, poor membrane permeabilization, and low stability in in vivo conditions. The article aims to summarize the latest findings on a role of TRPM2 in endothelial cells. We also show some future perspectives for the application of TRPM2 inhibitors in cardiovascular system diseases. View Full-Text
Keywords: TRPM2; endothelial dysfunction; reactive oxygen species; calcium ions TRPM2; endothelial dysfunction; reactive oxygen species; calcium ions
►▼ Show Figures 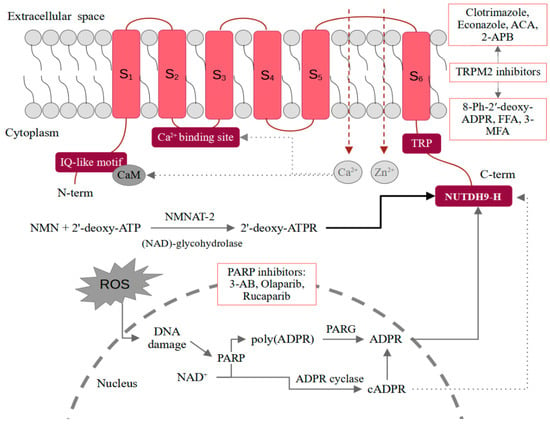