PAI-1 in Diabetes: Pathophysiology and Role as a Therapeutic Target

Glucose Variability: How Does It Work?

A growing body of evidence points to the role of glucose variability (GV) in the development of the microvascular and macrovascular complications of diabetes. In this review, we summarize data on GV-induced biochemical, cellular and molecular events involved in the pathogenesis of diabetic complications. Current data indicate that the deteriorating effect of GV on target organs can be realized through oxidative stress, glycation, chronic low-grade inflammation, endothelial dysfunction, platelet activation, impaired angiogenesis and renal fibrosis. The effects of GV on oxidative stress, inflammation, endothelial dysfunction and hypercoagulability could be aggravated by hypoglycemia, associated with high GV. Oscillating hyperglycemia contributes to beta cell dysfunction, which leads to a further increase in GV and completes the vicious circle. In cells, the GV-induced cytotoxic effect includes mitochondrial dysfunction, endoplasmic reticulum stress and disturbances in autophagic flux, which are accompanied by reduced viability, activation of apoptosis and abnormalities in cell proliferation. These effects are realized through the up- and down-regulation of a large number of genes and the activity of signaling pathways such as PI3K/Akt, NF-κB, MAPK (ERK), JNK and TGF-β/Smad. Epigenetic modifications mediate the postponed effects of glucose fluctuations. The multiple deteriorative effects of GV provide further support for considering it as a therapeutic target in diabetes. View Full-Text
Keywords: diabetes; hyperglycemia; hypoglycemia; glucose variability; complications; gene; epigenetic; signal pathways diabetes; hyperglycemia; hypoglycemia; glucose variability; complications; gene; epigenetic; signal pathways
►▼ Show Figures 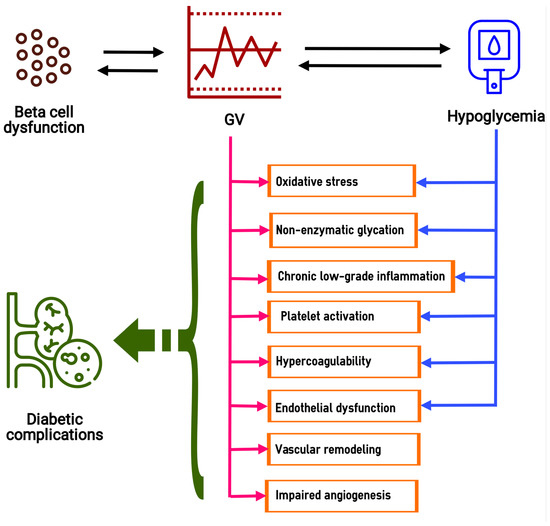