Cheonggukjang-Specific Component 1,3-Diphenyl-2-Propanone as a Novel PPARα/γ Dual Agonist: An In Vitro and In Silico Study
Previous Article in Journal

Metabolomics as a Tool to Elucidate the Sensory, Nutritional and Safety Quality of Wheat Bread—A Review

Wheat (Triticum aestivum) is one of the most extensively cultivated and used staple crops in human nutrition, while wheat bread is annually consumed in more than nine billion kilograms over the world. Consumers’ purchase decisions on wheat bread are largely influenced by its nutritional and sensorial characteristics. In the last decades, metabolomics is considered an effective tool for elucidating the information on metabolites; however, the deep investigations on metabolites still remain a difficult and longtime action. This review gives emphasis on the achievements in wheat bread metabolomics by highlighting targeted and untargeted analyses used in this field. The metabolomics approaches are discussed in terms of quality, processing and safety of wheat and bread, while the molecular mechanisms involved in the sensorial and nutritional characteristics of wheat bread are pointed out. These aspects are of crucial importance in the context of new consumers’ demands on healthy bakery products rich in bioactive compounds but, equally, with good sensorial acceptance. Moreover, metabolomics is a potential tool for assessing the changes in nutrient composition from breeding to processing, while monitoring and understanding the transformations of metabolites with bioactive properties, as well as the formation of compounds like toxins during wheat storage.
Keywords: metabolite profiling; omics; wheat breeding; dough fermentation; bakery product quality metabolite profiling; omics; wheat breeding; dough fermentation; bakery product quality

4. Application of Metabolomics for Wheat and Bread Safety Control

The presence of microbiological and chemical contaminants in food is one of the biggest challenges of food processing. In addition, climate change and environmental pollution could also generate contaminants and prejudicially affect the food quality [81]. For this reason, a lot of efforts have been made in all countries and communities in order to create laws and regulations to ensure public health.
Along with the legislation and claims regarding food safety, rapid, sensitive and effective analytical tools are necessary to detect the contaminants, sometimes present in trace amounts. In this context, the application of metabolomics in food safety control has proven its great potential in the evaluation of microbial toxins, allergens, anti-nutritionals, foodborne pathogens, pesticides [53,82].
Even with the great efforts of food processors, due to the microorganisms’ adaptation, microbial-related contaminants affect food safety frequently. Culture-dependent methods for microorganisms’ identification and characterization are now considered a time-consuming, labor-intensive and expensive approach. So, to prevent and control the negative implications of pathogenic microorganisms and their metabolites, omics techniques overstepped the boundaries by gaining applicability in the detection and identification of food pathogens [83]. Chromatography coupled with mass spectrometry (LC-MS, GC-MS) is usually used to quantify pathogens and toxins and for their identification, a comparison with available libraries is carried out [81]. Also, for this type of study matrix laser desorption/ionization mass spectrometry (MALDI-TOF), Fourier transform infra-red spectroscopy (FTIR) and NMR (which could be 1H NMR (proton nuclear magnetic resonance) and 2D NMR (two-dimensional nuclear magnetic resonance) were used [84].
Particular genera and species of fungi could contaminate wheat-producing mycotoxins as secondary toxic metabolites. The producing microorganisms belong to the genera of Aspergillus, Penicillium, Fusarium and Alternaria, while the most common mycotoxins produced are aflatoxins, fumonisins, ochratoxins, zearalenone, α-zearalanol, β-zearalanol, sterigmatocystin, deoxynivalenol and citrinin. Their toxicity is related to some diseases such as kidney cancer, immune suppression, nephrotoxicity, liver diseases and cancer, reproductive system diseases, leukoencephalomalacia, inhibition of cell growth and division, inhibition of protein synthesis, immune suppression, gastrointestinal diseases, and esophageal cancer [83]. After harvest, storing conditions play a crucial role in stopping aflatogenic fungi to produce aflatoxins and assure wheat safety. But wheat contamination with mycotoxins may occur also in the maturation period or during harvesting and transportation [48]. Metabolomics approaches have been successfully applied to monitor wheat safety over the last few years. Using LC-HRMS, Doppler et al. [85] determined deoxynivalenol in wheat cultivars. Also, by using the metabolomics approach (UHPLC-QTOF-MS), Nathanail et al. [86] identified wheat T-2 toxin, HT-2 toxin, and their metabolism products. Phenylpropanoids and derivatives were determined also in wheat cultivars using LC-MS techniques [87].
Deoxynivalenola, is a mycotoxin from trichothecene group produced by Fusarium ssp. and is the most common toxin found in crops all over the world. Deoxynivalenola is usually resistant to the milling process and remains in the flour and baking products [88]. The limits authorized by the European Commission for cereal grain is 1250 μg kg−1, while for flour, bran, germ and end products the limit is 750 μg kg−1 [89,90]. Metabolomic analysis revealed the presence of deoxynivalenol in wheat milling fraction, flour as well as in bakery products. De Dominicis et al. [91] reported its presence in both flour (10–100 mg/kg) and mini-cakes (20 mg/ kg) when ultra-high-pressure liquid chromatography (UHPLC) coupled with an Orbitrap Exactive™ high-resolution mass spectrometer (HRMS) was performed. Savi et al. [88] also reported that wheat bran contained the highest content of 2278 μg/kg deoxynivalenola, followed by wheat flour (1305 μg/ kg) and bread (437 μg/kg).
Regarding aflatoxin contamination, it is related to the presence of several factors implicated in microbial growth such as temperatures (25–37 °C), moisture (80–85%) and acidic values of pH [92]. Metabolomics studies were performed for aflatoxins detection and quantification and revealed that from 178 samples, 18.8% wheat samples and 8.2% crackers samples were detected positive with aflatoxin B1, even if the toxin content was under the European regulation limit for cereals (2 μg/kg) [89]. Also, wheat samples contained the highest level of aflatoxin B1, while in bread and whole bread this toxin was not found [93].
The employment of some xenobiotics (e.g., pesticides, fungicides, nanomaterials) in agriculture is a frequent practice to increase crop yields. However, the residues of these contaminants in food crops constitute a health risk, even if they are not permitted in higher concentrations than the limits. For detection and accurate determination of pesticides several studies proposed UHPLC-Orbitrap-MS/UPLC-MS method to detect pesticides in very low amounts from different food matrices, among which there are cereals, honey, eggs [94]. Mastovska et al. [95] optimized DSI-LVI-GC-TOFMS and UPLCMS/MS to analyze 180 pesticides between cereals grain. The analyzed pesticides were found in wheat extract ranging from 25–250 ng/g. Ultra-high-pressure liquid chromatography (UHPLC) coupled with an Orbitrap Exactive™ high-resolution mass spectrometer (HRMS) was performed by De Dominicis, Commissati, and Suman [91] reporting in wheat flour the presence of some pesticides (dodine, piperonyl butoxide, tebuconazole and methyl pirimiphos) in the of 1–10 mg/ kg range. GC-TOF (gas chromatography-time-of-flight mass spectrometry) analysis was performed on several types of fat-containing dough by Koesukwiwat et al. [96] to determine residues of pesticide. It was reported that the used method provided acceptable results for most pesticides with overall average recoveries between 70 and 120%. UHPLC-ESI–MS/MS (QqQ in MRM mode) was used for the determination of mycotoxins and pesticides from wheat flour by adapting the extraction method, a fact that improved the recoveries of analytes [97].
Metabolomics is viewed nowadays as a powerful technology able to assess unintended metabolites in food and their changes [98]. Within the metabolomics analysis frame, GC-MS, NMR and LC-MS were mainly used in the case of wheat to determine and differentiate GM (genetic modified) varieties from conventional ones, reporting a broad variation in the metabolites profile such as sugars, sugar phosphates, organic acids, fatty acids, polyols, terpenoides. However, when multivariate PCA analysis was performed in order to discriminate between samples it was found that the differences in metabolite profiling were small and rather due to the natural crop variability or to the environmental conditions [98,99,100].

In bakery science, metabolomics shows its potential to provide crucial information about several aspects of wheat and bread quality clearly. By analyzing the metabolome of wheat, breeders could develop stress-resistant plants and could predict their adaptability. Moreover, if the wheat molecular markers are combined with flours metabolite profile, wheat breeding for bread aroma will play a key role. It is expected that metabolomics approaches will be used extensively in the breadmaking process and high-quality product development by assessing the compounds involved in consumers’ sensorial preferences and select the optimum combination factors to increase health beneficial features. Thus, metabolomics might be considered a future efficient tool to elucidate the sensory, nutritional and safety quality of wheat bread.

This work was supported by a grant from the Ministry of Research, Innovation and Digitization, CNCS/CCCDI—UEFISCDI, project number PN-III-P2-2.1-PED-2019-5346, within PNCDI III. 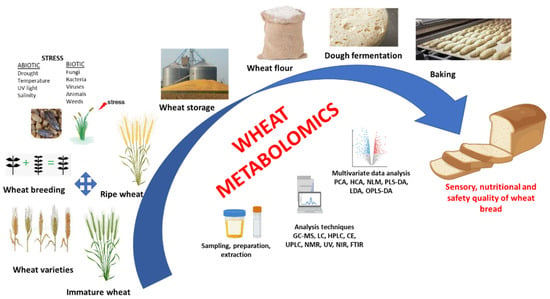 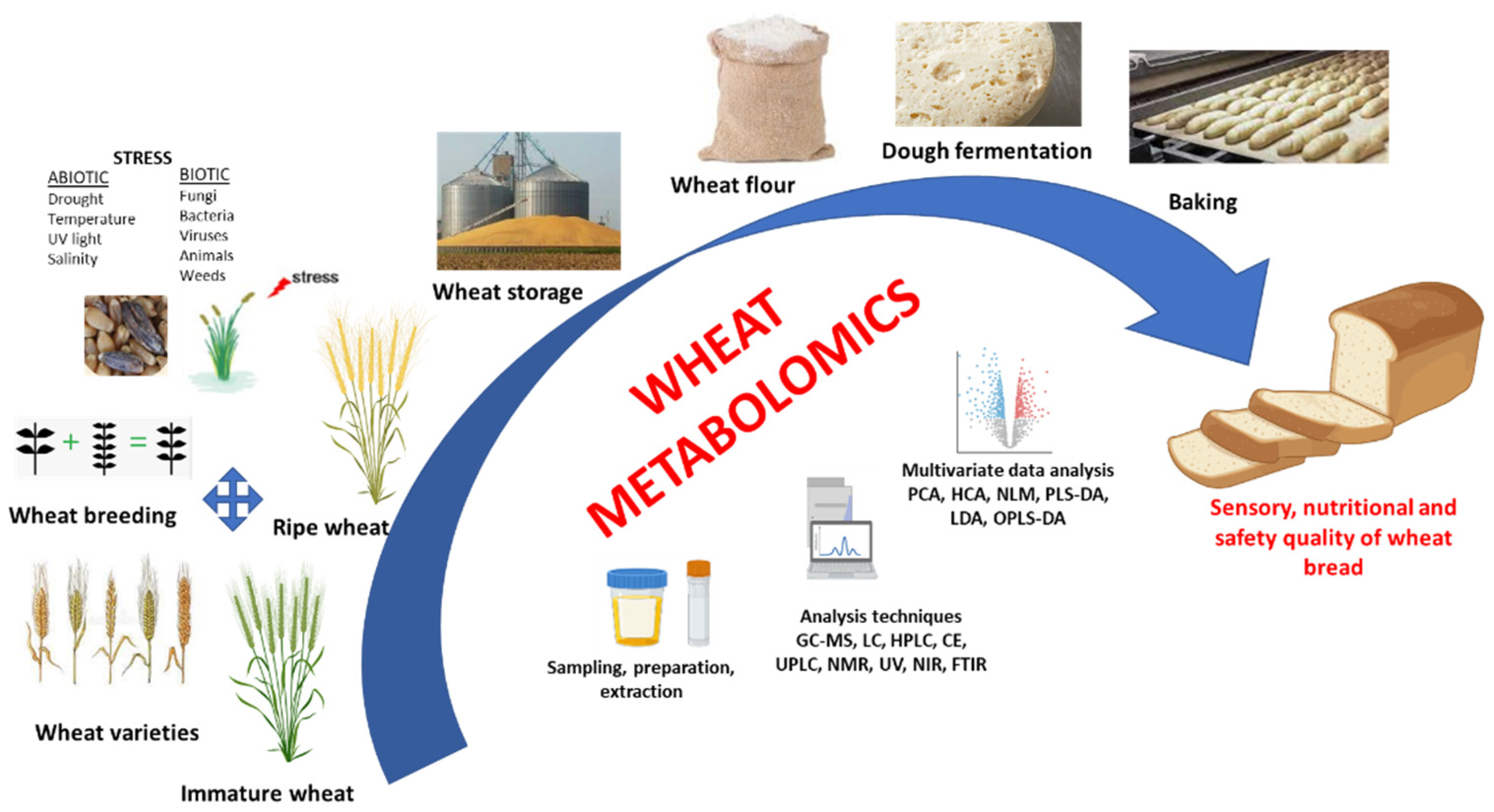