Micellar Carriers of Active Substances Based on Amphiphilic PEG/PDMS Heterograft Copolymers: Synthesis and Biological Evaluation of Safe Use on Skin
Previous Article in Journal

Esophageal squamous cell carcinoma (ESCC) is one of the most lethal neoplasms in both Japan and other parts of the world [1,2,3]. Multimodal medical treatments consisting of neoadjuvant chemotherapy or chemoradiation therapy followed by surgery is the current gold standard of treatment, especially for patients with advanced stage II or III ESCCs [4,5,6]. Alternatively, definitive chemoradiation therapy (CRT) itself may be another powerful treatment for carcinoma curability, because some cases have been reported to achieve pathologically complete remission (pCR) after neoadjuvant CRT [7]. Comparable prognoses after definitive CRT to surgery alone have been reported by a couple of independent prospective studies [8,9]. Nevertheless, not all patients with ESCC have been treated with definitive CRT as a first-line treatment. One of the reasons to refrain from definitive CRT as a first-line treatment option is that local relapses may then require salvage esophagectomies, which may have a high risk for severe comorbidities such as pulmonary complications [10]. Hence, it is necessary to treat them using the optimal medical procedures that have been determined by robust predictive or prognostic markers. Various studies have been performed to identify the predictive or prognostic factors of medical procedures for ESCC, including CRT, although no robust marker has yet been established [11,12,13].
Recent advances in molecular biology and tumor immunology have revealed the fact that the therapeutic effects of chemotherapy or radiation should be greatly influenced by the tumor immunologic microenvironment [14,15,16,17]. Actually, many studies have suggested that the factors relating to the tumor microenvironment (TME), such as PD-L1 expression or the presence of tumor-infiltrating lymphocytes (TIL), could be prognostic or predictive marker candidates for chemotherapy or chemoradiation in various types of human cancers, including ESCC [18,19,20,21,22,23]. These previous reports have encouraged us to examine and characterize the specific features of TIL and TME, especially within ESCCs that have relapsed after definitive CRT, to explore the prognostic maker candidates of definitive CRT followed by salvage esophagectomy. However, almost all the patients with advanced ESCCs are treated with neoadjuvant CRT or chemotherapy before surgery in Japan [24,25]. This suggests the difficulty of enrolling a sufficient number of patients with advanced ESCCs that have been solely treated by surgery as a control group. Instead, we enrolled patients with oral squamous cell carcinoma (OSCC) in this study; OSCC is considered to be comparable to ESCC, because they share similar pathologic diagnoses, squamous cell carcinoma, carcinogenic pathways (such as alcohol drinking and smoking), and molecular features [26,27,28,29]. Additionally, ESCC is usually treated by neoadjuvant CRT or chemotherapy followed by surgery, as described above, whereas OSCC is rarely treated with neoadjuvant chemotherapy or CRT before surgery.
In this study, we reveal the results of diversity analyses of the T-cell receptor (TCR) repertoire of TIL within post-definitive CRT locally relapsed ESCC by comparing them to ESCC and OSCC that have both been treated only by surgery in order to reveal the specific immunological features initiated by definitive CRT. We also demonstrate the molecular features of the TME, especially in ESCCs relapsed after definitive CRT, which could be prognostic marker candidates after salvage esophagectomy.

2.2. Divergency of the T-Cell Receptor Repertoire of Tumor-Infiltrating Lymphocytes Was Not Significantly Different between Patients with Good or Poor Prognoses after Salvage Surgery for Esophageal Squamous Cell Carcinoma Locally Relapsed after Definitive Chemoradiation Therapy

The results of the quantitative PCR (qPCR) analyses are shown in Figure 4. The ratio of PD-L1 mRNA to CD8B mRNA was statistically different between patients with good prognoses and with poor prognoses after the salvage surgeries for ESCCs relapsed after definitive CRT (p = 0.007), although the expression levels of PD-L1 and CD8B, adjusted by GAPDH mRNA, were not statistically different between these two groups (p = 0.311 and p = 0.490, respectively).

The clinical and pathologic data of the enrolled patients are summarized in Table 1. All the tumors of seven ESCCs and 13 OSCCs were diagnosed as squamous cell carcinomas by board-certified pathologists. Among the seven ESCCs, two patients were treated only by surgery, and the others were primarily treated by definitive CRT, followed by salvage esophagectomy. Among the five patients treated by salvage esophagectomy, two survived without cancer recurrence, while the others died from esophageal cancer recurrence.
Specimens of esophageal cancer tissues were obtained from the enrolled patients with advanced ESCC who underwent surgical treatments with or without the preceding definitive CRT at Tohoku University Hospital. Furthermore, samples from patients with OSCCs were obtained from the those that underwent surgical treatments without any preceding neoadjuvant therapies at Tsurumi University Hospital or Kanto Rosai Hospital. This study was approved by the ethics committees of Tohoku University Graduate School of Medicine (permission number 2016-1-331), National Hospital Organization Sagamihara National Hospital (permission number 2018-051), Tsurumi University (permission number 1608), and Kanto Rosai Hospital (permission number 2018-25). Written informed consent was obtained prior to surgical treatment.

Fresh specimens of ESCC tissues and OSCC tissues were obtained from all patients and immediately soaked in RNAlater Stabilization Solution (Invitrogen, Waltham, MA, USA) and/or eventually frozen at −80 °C. Total RNA was extracted from each specimen using the RNeasy Lipid Tissue Mini Kit (Qiagen, Venio, the Netherlands) according to the manufacturer’s instructions. Complementary DNA (cDNA) was synthesized from DNA-free RNA using the PrimeScript RT reagent Kit (Takara Bio, Tokyo, Japan) according to the manufacturer’s instructions.

The expression levels of immune response-related genes, including T-cell-related clusters of differentiation antigens and biomarkers, were measured by quantitative polymerase chain reaction (qPCR) using the Bio-Rad CFX96 system (Bio-Rad, Hercules, CA, USA). PCR primers for CD8B and GAPDH were purchased from Takara Bio Inc. (Shiga, Japan), and the primers for PD-L1 were obtained from a previous report [40]. The sequences of the primers were as follows:
cDNAs were synthesized from 500 ng of total RNA isolated from each specimen of ESCC or OSCC using the Prime Script RT reagent Kit (Takara, Shiga, Japan) for each of the 10 qPCR reactions. The PCR mixture consisted of 5 μL of SsoFast EvaGreen Supermix (Bio-Rad, Hercules, CA, USA), 3.5 μL of RNase/ DNase-free water, 0.5 μL of 5-μM primer mix, and 1-μL cDNA in a final total volume of 10 μL. This was then applied to the CFX96 system. Cycling conditions were as follows: 30 s at 95 °C, followed by 50 cycles of 1 s at 95 °C and 5 s at 60 °C. At the end of each program, a melting curve analysis was performed from 70 °C to 94 °C to confirm homogeneity of the PCR products. All assays were performed in triplicate, and mean values were used to calculate the gene expression levels. For calibration of the absolute quantification, a standard curve for each target was prepared by five 10-fold serial dilutions of the standard nucleotide that was generated by the linearized plasmid cloned with the PCR product of each target. This was confirmed by DNA sequencing using the Sanger method and was quantified by SmartSpec3000 (Bio-Rad, Hercules, CA, USA).

The clonality index was defined as either Pielou’s evenness, the Shannon-Weaver index H, or inverse Simpson’s index (1/λ) and calculated as described previously [39,41].

For continuous variables, the Shapiro-Wilk W test for normality was performed for each group, at first. If the parametric conditions were fulfilled, an unpaired Student’s t-test was performed, except for those that had statistical significance (p < 0.05) for the Levene’s test, which were instead analyzed by Welch’s t-test. For nonparametric conditions, the Mann-Whitney U test was performed. All analyses were performed using SPSS version 24 (IBM, Armonk, NY, USA). A bilateral p-value below 0.05 was considered statistically significant.

In this study, we showed a significant induction of oligoclonality of TIL in ESCC or OSCC when compared to healthy volunteers; further, we suggested the clonal expansion of TIL might be more notably induced when preceded by definitive CRT. Furthermore, our results suggested that a low ratio of PD-L1 mRNA/CD8B mRNA in tumor tissues after definitive CRT could be a potential prognostic maker for salvage surgery, although the clonal expansion of TIL itself was not enough to improve the prognosis there. We predicted that not only the clonal expansion of TIL but, also, PD-L1 suppression, which is likely upregulated during chemotherapy and chemoradiation therapy, should play an important role in improving the prognosis. This viewpoint was supported by previous results in other types of cancers, such as extrahepatic bile duct cancers, non-small cell lung carcinoma, or tongue squamous cell carcinoma [18,21,22,36,37]. However, the results presented here should be validated by another clinical cohort because of the limited number of enrolled patients, especially for the prognostic study of salvage surgery after definitive CRT, and also validated by using endoscopic biopsies before salvage surgeries to establish the predictive markers.

The following are available online at https://0-www-mdpi-com.brum.beds.ac.uk/1422-0067/22/3/1098/s1. Table S1: The data used in this study; the results from the TCR repertoire analyses and from the quantitative PCR.

Written informed consent was obtained prior to surgical treatment.

The authors are grateful to Kazutaka Kitaura (Repertoire Genesis) for his helpful advice. 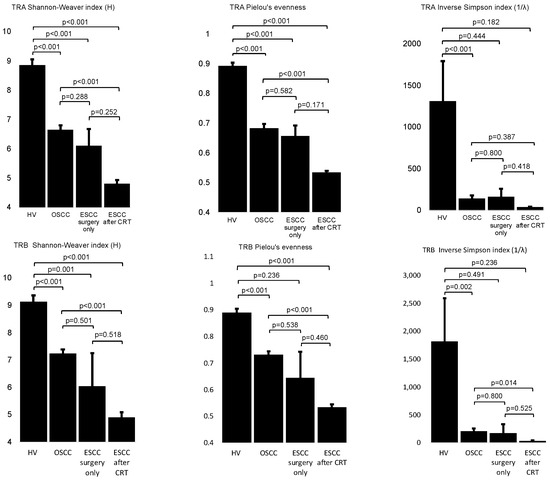 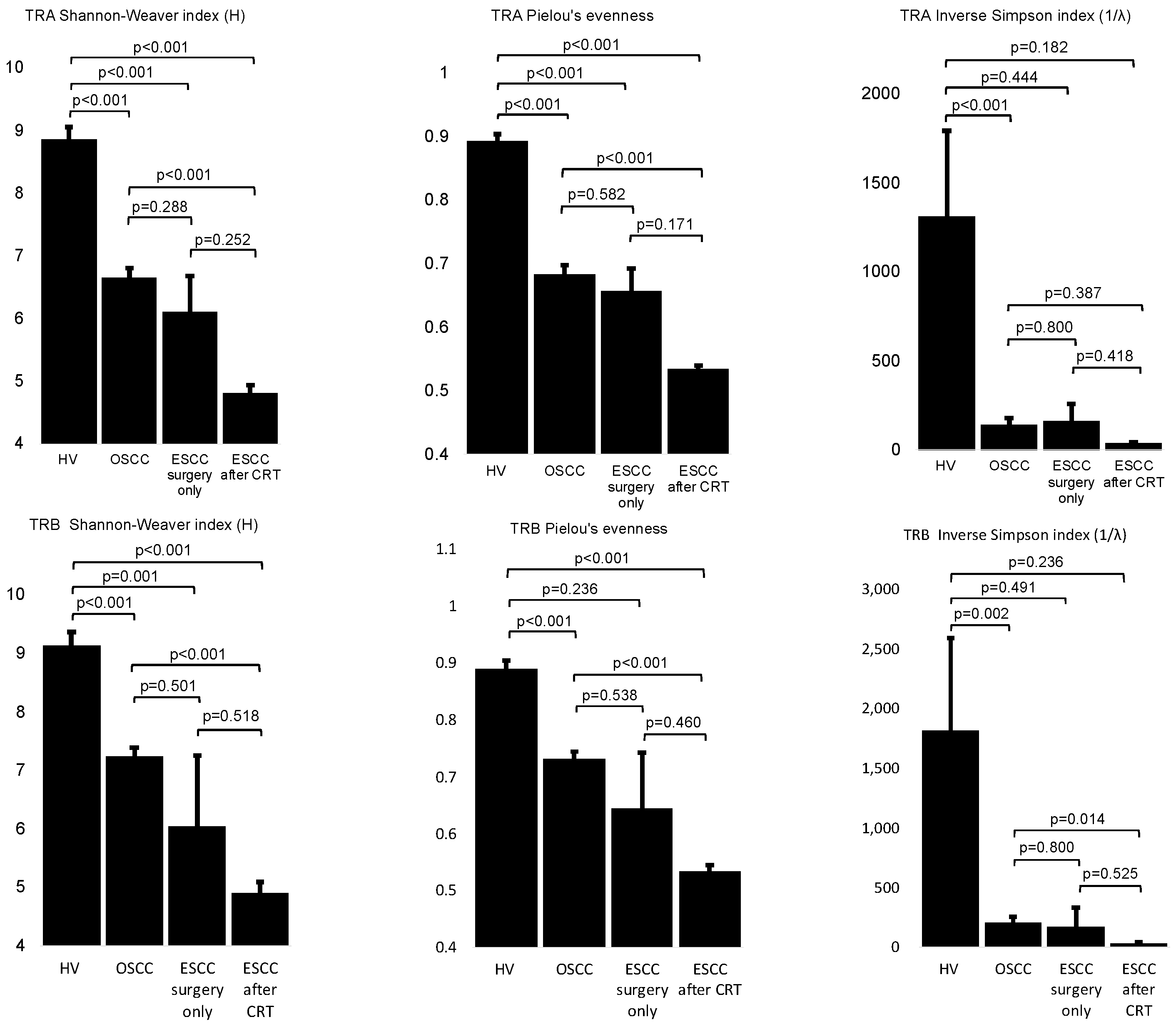