Aptamers Against the β-Conglutin Allergen: Insights into the Behavior of the Shortest Multimeric(Intra)Molecular DNA G-Quadruplex

In previous work, a 93-mer aptamer was selected against the anaphylactic allergen, β-conglutin and truncated to an 11-mer, improving the affinity by two orders of magnitude, whilst maintaining the specificity. This 11-mer was observed to fold in a G-quadruplex, and preliminary results indicated the existence of a combination of monomeric and higher-order structures. Building on this previous work, in the current study, we aimed to elucidate a deeper understanding of the structural forms of this 11-mer and the effect of the structure on its binding ability. A battery of techniques including polyacrylamide gel electrophoresis, high-performance liquid chromatography in combination with electrospray ionization time-of-flight mass spectrometry, matrix-assisted laser desorption/ionization time-of-flight, thermal binding analysis, circular dichroism and nuclear magnetic resonance were used to probe the structure of both the 11-mer and the 11-mer flanked with TT- at either the 5′ or 3′ end or at both ends. The TT-tail at the 5′ end hinders stacking effects and effectively enforces the 11-mer to maintain a monomeric form. The 11-mer and the TT- derivatives of the 11-mer were also evaluated for their ability to bind its cognate target using microscale thermophoresis and surface plasmon resonance, and biolayer interferometry confirmed the nanomolar affinity of the 11-mer. All the techniques utilized confirmed that the 11-mer was found to exist in a combination of monomeric and higher-order structures, and that independent of the structural form present, nanomolar affinity was observed. View Full-Text
Keywords: G-quadruplex; 11-mer aptamer; β-conglutin; PAGE; melting curves; CD; NMR; BLI; MST; SPR G-quadruplex; 11-mer aptamer; β-conglutin; PAGE; melting curves; CD; NMR; BLI; MST; SPR
►▼ Show Figures 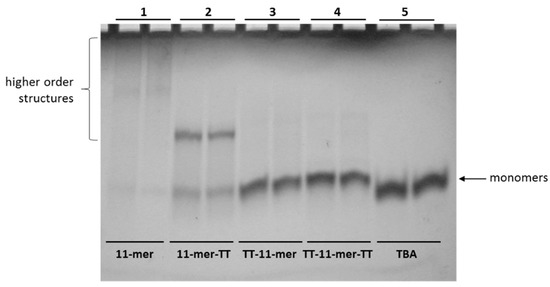