Apiculate yeasts belonging to the genus Hanseniaspora are commonly isolated from viticultural settings and often dominate the initial stages of grape must fermentations. Although considered spoilage yeasts, they are now increasingly becoming the focus of research, with several whole-genome sequencing studies published in recent years. However, tools for their molecular genetic manipulation are still lacking. Here, we report the development of a tool for the genetic modification of Hanseniaspora uvarum. This was employed for the disruption of the HuATF1 gene, which encodes a putative alcohol acetyltransferase involved in acetate ester formation. We generated a synthetic marker gene consisting of the HuTEF1 promoter controlling a hygromycin resistance open reading frame (ORF). This new marker gene was used in disruption cassettes containing long-flanking (1000 bp) homology regions to the target locus. By increasing the antibiotic concentration, transformants were obtained in which both alleles of the putative HuATF1 gene were deleted in a diploid H. uvarum strain. Phenotypic characterisation including fermentation in Müller-Thurgau must showed that the null mutant produced significantly less acetate ester, particularly ethyl acetate. This study marks the first steps in the development of gene modification tools and paves the road for functional gene analyses of this yeast. View Full-Text
Keywords: Hanseniaspora uvarum; transformation; genetic modification; ATF1; ethyl acetate; fermentation Hanseniaspora uvarum; transformation; genetic modification; ATF1; ethyl acetate; fermentation
►▼ Show Figures 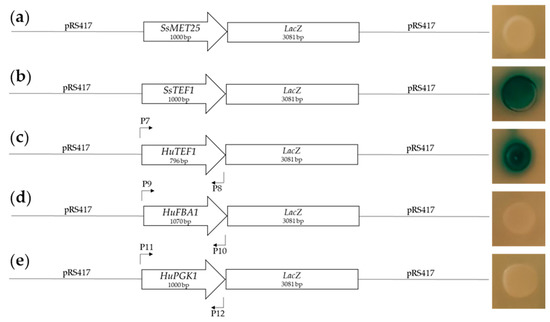