1,2-unsaturated pyrrolizidine alkaloids (PAs) are secondary plant metabolites occurring as food contaminants that can cause severe liver damage upon metabolic activation in hepatocytes. However, it is yet unknown how these contaminants enter the cells. The role of hepatic transporters is only at the beginning of being recognized as a key determinant of PA toxicity. Therefore, this study concentrated on assessing the general mode of action of PA transport in the human hepatoma cell line HepaRG using seven structurally different PAs. Furthermore, several hepatic uptake and efflux transporters were targeted with pharmacological inhibitors to identify their role in the uptake of the PAs retrorsine and senecionine and in the disposition of their N-oxides (PANO). For this purpose, PA and PANO content was measured in the supernatant using LC-MS/MS. Also, PA-mediated cytotoxicity was analyzed after transport inhibition. It was found that PAs are taken up into HepaRG cells in a predominantly active and structure-dependent manner. This pattern correlates with other experimental endpoints such as cytotoxicity. Pharmacological inhibition of the influx transporters Na+/taurocholate co-transporting polypeptide (SLC10A1) and organic cation transporter 1 (SLC22A1) led to a reduced uptake of retrorsine and senecionine into HepaRG cells, emphasizing the relevance of these transporters for PA toxicokinetics. View Full-Text
Keywords: pyrrolizidine alkaloids; structure-dependency; uptake; hepatic transporter pyrrolizidine alkaloids; structure-dependency; uptake; hepatic transporter
►▼ Show Figures 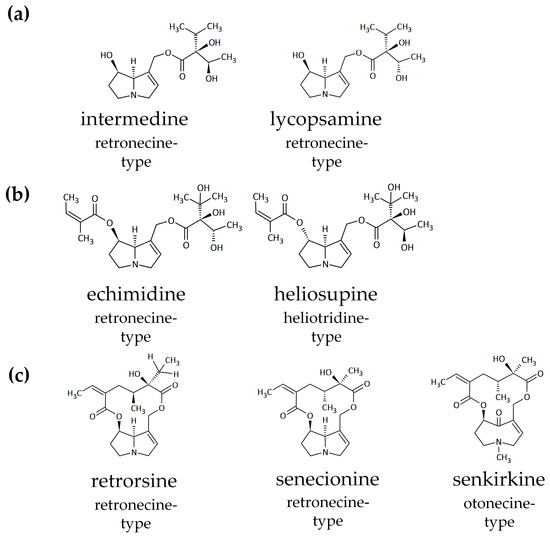