In this paper, the kinetics of the reaction of phenyl isocyanate with crosslinking agents such as sucrose, sorbitol, and glycerol are reported. Crosslinking agents were used in high molar excess to isocyanate to obtain pseudo-first-order rate dependencies, and the reaction products were separated by high-performance liquid chromatography and detected by UV spectroscopy and mass spectrometry. It was found that the glycerol’s primary hydroxyl groups were approximately four times reactive than the secondary ones. However, in the case of sorbitol, the two primary OH groups were found to be the most reactive, and the reactivity of hydroxyl groups decreased in the order of kOH(6)(8.43) > kOH(1)(6.91) > kOH(5)(1.19) > kOH(2)(0.98) > kOH(3)(0.93) > kOH(4)(0.64), where the numbers in the subscript and in the brackets denote the position of OH groups and the pseudo-first-order rate constants, respectively. The Atomic Polar Tenzor (APT) charges of OH groups and dipole moments of monosubstituted sorbitol derivatives calculated by density functional theory (DFT) also confirmed the experimental results. On the other hand, the reactions of phenyl isocyanate with crosslinking agents were also performed using high excess isocyanate in order to determine the number of OH-groups participating effectively in the crosslinking process. However, due to the huge number of derivatives likely formed in these latter reactions, a simplified reaction scheme was introduced to describe the resulting product versus reaction time distributions detected by matrix-assisted laser desorption/ionization mass spectrometry (MALDI-TOF MS). Based on the results, the kinetically equivalent functionality (fk) of each crosslinking agent was determined and found to be 2.26, 2.6, and 2.96 for glycerol, sorbitol, and sucrose, respectively. View Full-Text
Keywords: glycerol; sorbitol; sucrose; phenyl-isocyanate; reactivity; kinetics glycerol; sorbitol; sucrose; phenyl-isocyanate; reactivity; kinetics
►▼ Show Figures 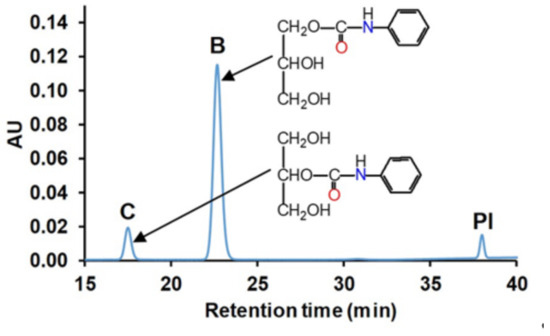