Mutations in the X-linked MECP2 gene are responsible for Rett syndrome (RTT), a severe neurological disorder. MECP2 is a transcriptional modulator that finely regulates the expression of many genes, specifically in the central nervous system. Several studies have functionally linked the loss of MECP2 in astrocytes to the appearance and progression of the RTT phenotype in a non-cell autonomous manner and mechanisms are still unknown. Here, we used primary astroglial cells from Mecp2-deficient (KO) pups to identify deregulated secreted proteins. Using a differential quantitative proteomic analysis, twenty-nine proteins have been identified and four were confirmed by Western blotting with new samples as significantly deregulated. To further verify the functional relevance of these proteins in RTT, we tested their effects on the dendritic morphology of primary cortical neurons from Mecp2 KO mice that are known to display shorter dendritic processes. Using Sholl analysis, we found that incubation with Lcn2 or Lgals3 for 48 h was able to significantly increase the dendritic arborization of Mecp2 KO neurons. To our knowledge, this study, through secretomic analysis, is the first to identify astroglial secreted proteins involved in the neuronal RTT phenotype in vitro, which could open new therapeutic avenues for the treatment of Rett syndrome. View Full-Text
Keywords: astrocytes; iTRAQ quantitative proteomic approach; Mecp2; neuronal arborization; Rett syndrome; secretome astrocytes; iTRAQ quantitative proteomic approach; Mecp2; neuronal arborization; Rett syndrome; secretome
►▼ Show Figures 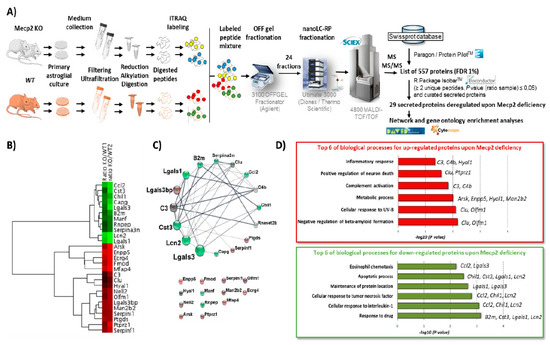