Disentangling the Molecular Mechanisms of the Antidepressant Activity of Omega-3 Polyunsaturated Fatty Acid: A Comprehensive Review of the Literature

Major depressive disorders (MDDs) are often associated with a deficiency in long-chain omega-3 polyunsaturated fatty acids (ω-3 PUFAs), as well as signs of low-grade inflammation. Epidemiological and dietary studies suggest that a high intake of fish, the major source of ω-3 PUFAs, is associated with lower rates of MDDs. Meta-analyses of randomized placebo-controlled ω-3 PUFAs intervention-trials suggest that primarily eicosapentaenoic acid (EPA), but not docosahexaenoic acid (DHA), is responsible for the proposed antidepressant effect. In this review, we dissect the current biological knowledge on EPA and DHA and their bioactive lipid metabolites to search for a pharmacological explanation of this, to date, unexplained clinical observation. Through enzymatic conversion by cyclooxygenase (COX), lipoxygenase (ALOX), and cytochrome P-450 monooxygenase (CYP), EPA and DHA are metabolized to major anti-inflammatory and pro-resolving lipid mediators. In addition, both ω-3 PUFAs are precursors for endocannabinoids, with known effects on immunomodulation, neuroinflammation, food intake and mood. Finally, both ω-3 PUFAs are crucial for the structure and organization of membranes and lipid rafts. While most biological effects are shared by these two ω-3 PUFAs, some distinct features could be identified: (1) The preferential CYP monooxygenase pathway for EPA and EPA derived eicosanoids; (2) The high CB2 receptor affinities of EPA-derived EPEA and its epoxy-metabolite 17,18-EEQ-EA, while the DHA-derived endocannabinoids lack such receptor affinities; (3) The competition of EPA but not DHA with arachidonic acid (AA) for particular glycerophospholipids. EPA and AA are preferentially incorporated into phosphatidylinositols, while DHA is mainly incorporated into phosphatidyl-ethanolamine, -serine and -choline. We propose that these distinct features may explain the superior antidepressant activity of EPA rich ω-3 PUFAs and that these are potential novel targets for future antidepressant drugs. View Full-Text
Keywords: ω-3 polyunsaturated fatty acid; EPA-paradox; resolvin; cytochrome P450 isoenzyme; epoxide; endocannabinoid; CB2 receptor ω-3 polyunsaturated fatty acid; EPA-paradox; resolvin; cytochrome P450 isoenzyme; epoxide; endocannabinoid; CB2 receptor
►▼ Show Figures 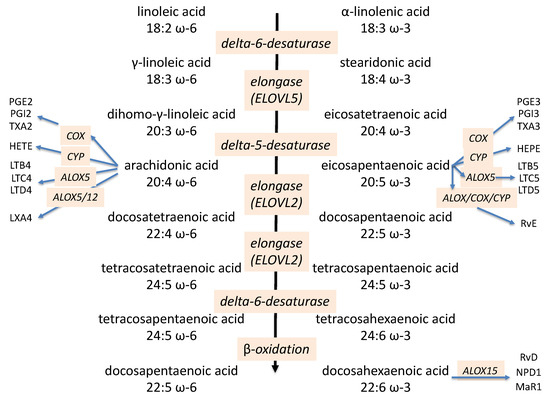