Low phosphorus (P) availability is one of the major constraints to plant growth, particularly in acidic soils. A possible mechanism for enhancing the use of sparsely soluble P forms is the secretion of malate in plants by the aluminum-activated malate transporter (ALMT) gene family. Despite its significance in plant biology, the identification of the ALMT gene family in oilseed rape (Brassica napus; B. napus), an allotetraploid crop, is unveiled. Herein, we performed genome-wide identification and characterization of ALMTs in B. napus, determined their gene expression in different tissues and monitored transcriptional regulation of BnaALMTs in the roots and leaves at both a sufficient and a deficient P supply. Thirty-nine BnaALMT genes were identified and were clustered into five branches in the phylogenetic tree based on protein sequences. Collinearity analysis revealed that most of the BnaALMT genes shared syntenic relationships among BnaALMT members in B. napus, which suggested that whole-genome duplication (polyploidy) played a major driving force for BnaALMTs evolution in addition to segmental duplication. RNA-seq analyses showed that most BnaALMT genes were preferentially expressed in root and leaf tissues. Among them, the expression of BnaC08g13520D, BnaC08g15170D, BnaC08g15180D, BnaC08g13490D, BnaC08g13500D, BnaA08g26960D, BnaC05g14120D, BnaA06g12560D, BnaC05g20630D, BnaA07g02630D, BnaA04g15700D were significantly up-regulated in B. napus roots and leaf at a P deficient supply. The current study analyzes the evolution and the expression of the ALMT family in B. napus, which will help in further research on their role in the enhancement of soil P availability by secretion of organic acids. View Full-Text
Keywords: Brassica napus; ALMT gene family; phylogenetic analysis; phosphorus-starvation; gene expression Brassica napus; ALMT gene family; phylogenetic analysis; phosphorus-starvation; gene expression
►▼ Show Figures 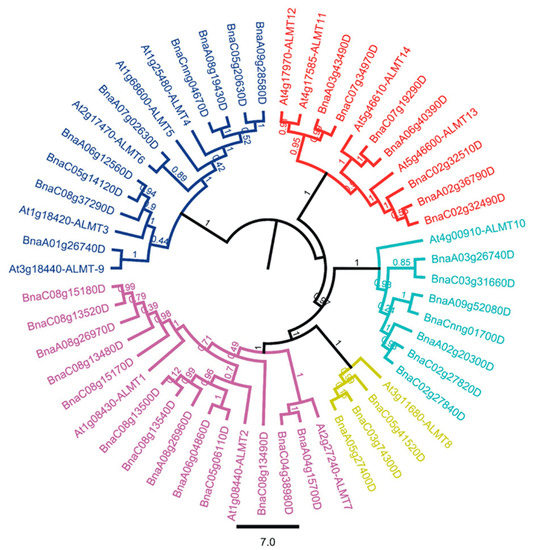