Alzheimer’s disease (AD) has traditionally been discussed as a disease where serious cognitive decline is a result of Aβ-plaque accumulation, tau tangle formation, and neurodegeneration. Recently, it has been shown that metabolic dysregulation observed with insulin resistance and type-2 diabetes actively contributes to the progression of AD. One of the pathologies linking metabolic disease to AD is the release of inflammatory cytokines that contribute to the development of brain neuroinflammation and mitochondrial dysfunction, ultimately resulting in amyloid-beta peptide production and accumulation. Improving these metabolic impairments has been shown to be effective at reducing AD progression and improving cognitive function. The polyphenol resveratrol (RSV) improves peripheral metabolic disorders and may provide similar benefits centrally in the brain. RSV reduces inflammatory cytokine release, improves mitochondrial energetic function, and improves Aβ-peptide clearance by activating SIRT1 and AMPK. RSV has also been linked to improved cognitive function; however, the mechanisms of action are less defined. However, there is evidence to suggest that chronic RSV-driven AMPK activation may be detrimental to synaptic function and growth, which would directly impact cognition. This review will discuss the benefits and adverse effects of RSV on the brain, highlighting the major signaling pathways and some of the gaps surrounding the use of RSV as a treatment for AD. View Full-Text
Keywords: resveratrol; metabolic dysregulation; Alzheimer’s disease; neuroinflammation; SIRT1; AMPK; neuronal health; synaptic plasticity; PGC1-α resveratrol; metabolic dysregulation; Alzheimer’s disease; neuroinflammation; SIRT1; AMPK; neuronal health; synaptic plasticity; PGC1-α
►▼ Show Figures 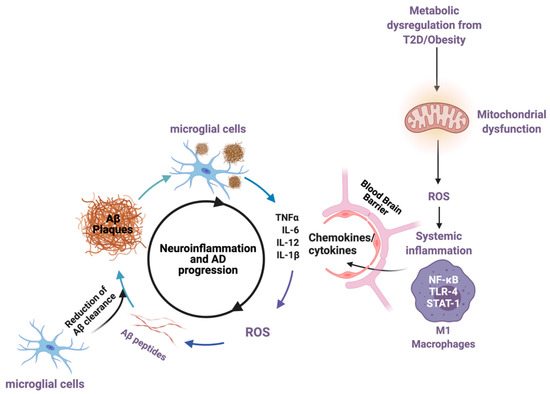