Adipose Tissue Plasticity in Response to Pathophysiological Cues: A Connecting Link between Obesity and Its Associated Comorbidities
Previous Article in Journal

Extracellular vesicles (EVs) are membranous particles released by all cell types. Their role as functional carrier of bioactive molecules is boosted by cells that actively secrete them in biological fluids or in the intercellular space (interstitial EVs, iEVs). Here we have optimised a method for the isolation and characterization of zebrafish iEVs from whole melanoma tissues. Zebrafish melanoma iEVs are around 140 nm in diameter, as determined by nanoparticle tracking and transmission electron microscopy (TEM) analysis. Western blot analysis shows enrichment for CD63 and Alix in the iEV fraction, but not in melanoma cell lysates. Super resolution and confocal microscopy reveal that purified zebrafish iEVs are green fluorescent protein positive (GFP+), indicating that they integrate the oncogene GFP-HRASV12G used to induce melanoma in this model within their vesicular membrane or luminal content. Analysis of RNA-Seq data found 118 non-coding (nc)RNAs differentially distributed between zebrafish melanoma and their iEVs, with only 17 of them being selectively enriched in iEVs. Among these, the RNA components of RNAses P and MRP, which process ribosomal RNA precursors, mitochondrial RNAs, and some mRNAs, were enriched in zebrafish and human melanoma EVs, but not in iEVs extracted from brain tumours. We found that melanoma iEVs induce an inflammatory response when injected in larvae, with increased expression of interferon responsive genes, and this effect is reproduced by MRP- or P-RNAs injected into circulation. This suggests that zebrafish melanoma iEVs are a source of MRP- and P-RNAs that can trigger inflammation in cells of the innate immune system. View Full-Text
Keywords: long ncRNA; P and MRP RNAse; melanoma; danio rerio; exosomes/extracellular vesicles long ncRNA; P and MRP RNAse; melanoma; danio rerio; exosomes/extracellular vesicles
►▼ Show Figures 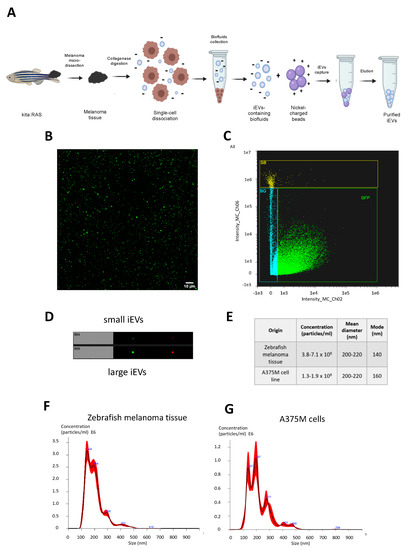