Adipose Tissue Plasticity in Response to Pathophysiological Cues: A Connecting Link between Obesity and Its Associated Comorbidities

Adipose tissue (AT) is a remarkably plastic and active organ with functional pleiotropism and high remodeling capacity. Although the expansion of fat mass, by definition, represents the hallmark of obesity, the dysregulation of the adipose organ emerges as the forefront of the link between adiposity and its associated metabolic and cardiovascular complications. The dysfunctional fat displays distinct biological signatures, which include enlarged fat cells, low-grade inflammation, impaired redox homeostasis, and cellular senescence. While these events are orchestrated in a cell-type, context-dependent and temporal manner, the failure of the adipose precursor cells to form new adipocytes appears to be the main instigator of the adipose dysregulation, which, ultimately, poses a deleterious milieu either by promoting ectopic lipid overspill in non-adipose targets (i.e., lipotoxicity) or by inducing an altered secretion of different adipose-derived hormones (i.e., adipokines and lipokines). This “adipocentric view” extends the previous “expandability hypothesis”, which implies a reduced plasticity of the adipose organ at the nexus between unhealthy fat expansion and the development of obesity-associated comorbidities. In this review, we will briefly summarize the potential mechanisms by which adaptive changes to variations of energy balance may impair adipose plasticity and promote fat organ dysfunction. We will also highlight the conundrum with the perturbation of the adipose microenvironment and the development of cardio-metabolic complications by focusing on adipose lipoxidation, inflammation and cellular senescence as a novel triad orchestrating the conspiracy to adipose dysfunction. Finally, we discuss the scientific rationale for proposing adipose organ plasticity as a target to curb/prevent adiposity-linked cardio-metabolic complications. View Full-Text
Keywords: adipose tissue; adipose precursor cells; obesity; senescence; oxidative stress; type 2 diabetes; cardiovascular disease adipose tissue; adipose precursor cells; obesity; senescence; oxidative stress; type 2 diabetes; cardiovascular disease
►▼ Show Figures 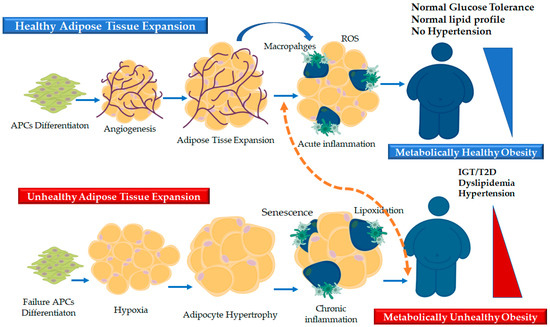