Currently, serum is used more often than urine to detect prostate specific antigen (PSA). The need for a non-invasive test yielding similar results led us to develop a urine test that uses solar irradiated water as a reactant species. To develop this technology, seven reagents plus one control were produced by exposure of water for 40 days in sunlight to the colors of the visible spectrum through colored cellophane, control being an unwrapped bottle of sterile water. Patients (127) were examined for serum PSA and the urine was tested using the above reagents. A positive urine test was observed with yellow-filtered irradiated water which absorbed at 454nm. Twenty-five of the 45 patients with positive results for the urine test had PSA levels of 0.21-4.0 ng/ml. Thus, this pilot study describes a non-invasive urine test mainly positive in patients with PSA 0.21-4.0 ng/ml.
Keywords: Prostate specific antigen; solar irradiation; cancer screening; urine test Prostate specific antigen; solar irradiation; cancer screening; urine test

Prostate cancer is recognized as the most common type of cancer and the second leading cause of cancer-related deaths in men [1]. The principle screening tests for detection of asymptomatic prostate cancer are the digital rectal examination (DRE) and measurement of the serum marker prostate specific antigen (PSA) [2]. Screening may also include a urine test to check for blood or infection.
The principal drawback of the PSA test is its imperfect specificity, owing to the fact that common conditions, such as benign prostate hyperplasia (BPH) and prostatitis, can cause borderline or even markedly abnormal test results [3,4]. These results can lead to expensive diagnostic evaluation and unwarranted patient anxiety. At the other extreme, the high sensitivity of the test can result in over diagnosis. There is always the chance that small, indolent tumors which might require no treatment and which may never have surfaced clinically, would be gathered in the same net and indicated to be aggressive, potentially life threatening cancers [5]. There is also debate over the level of PSA-2.5 versus 4.0 ng/ml-that could be considered abnormal and might warrant biopsy [6,7]. For this reason, an alternate urine test, which is partially positive with a serum PSA of <4.0 ng/ml, may be useful in detecting a subgroup of patients who do not yet require tumor biopsy.
The rational for choosing the current approach is based on the use of solar irradiated water for healing purposes some dating back to ancient healers and others to a more recent use of solarized water with certain additives [8,9]. Sun exposure for a minimum of five hours and maximum of 48 hours has been used to decontaminate water from bacteria and viruses [10,11,12,13,14,15]. Solarization for a minimum of six weeks has also been used to control pest infestation in farming [16]. The biomodulatory effects of individual colors of the spectrum have not been fully characterized.
Our main interest was to develop in-vitro diagnostic testing using sun exposed water. This study investigates the diagnostic effect of mixing urine from urology clinic patients with solar irradiated water. We hypothesize that each spectrum of visible solar light can have diverse influence on different biological entities, and the type of influence may depend on the energy transfer.
To test this hypothesis, we subjected plastic bottled (50 % light transmission) sterile water to sunlight irradiation through violet, indigo, blue, green, yellow, orange, and red colored cellophane paper for a continuous 40-day period in an open environment. The bottles stood in an upright position. Irradiation generated seven reagents corresponding to the visible spectrum of light, along with a control corresponding to an unwrapped bottle exposed to polychromatic light rather than through particular colored cellophane [17]. These energized waters were then used as reagents for a urine screening kit to test abnormalities in the prostate.
The goal of the present study was to assess the potential usefulness of irradiated water in determining the colorimetric changes in the reaction between irradiated water and the urine from patients. For this purpose, the characteristics of the interaction between the urine and monochromatic irradiated waters were first compared with polychromatic irradiated water. The positive colorimetric tests were then compared with the distribution profile of serum PSA. The absorbency profile of a positive reaction was also investigated spectrophoretically.

Sterilized (double-distilled) water in sterilized translucent (50% transparent) plastic (a copolymer of 98% polypropylene and 2% polyethylene) bottles was obtained from Baxter (Deerfield, Illinois). The labels were removed from the bottles. The bottles were then wrapped in cellophane corresponding to the visible monochromatic spectral colors (violet, indigo, blue, green, yellow, orange, and red). Controls included one unwrapped bottle of sterilized water. The sterilized water in plastic bottles was incubated during the months of October and November in Jackson, Mississippi. The bottles (minimum of two bottles for each coloration were exposed to all daily hours of sunlight for 40 day and were then wrapped in aluminum foil without removing the cellophane and placed in the dark to avoid unwanted light exposure.

Urine was collected from patients who visited the urology clinic between the hours of 8.00 a.m. and 12.00 p.m. The first voided urine was collected and dip-test analysis of the urine was performed. Lack of infection was established. None of the subjects tested were under medication. The urine sample was stored at 4oC until it could be processed. The pH of the urine samples was measured again before testing. The pH of the reagent water was ≥5.5. We tested urine samples of pH 6.0 to 6.8 to be within one pH unit difference. Urine samples (100 µl) taken in triplicates were mixed with 100 µl of different irradiated water samples and incubated at room temperature for seven days in a 96-well, flat bottomed tissue culture plate with a low evaporation lid. The first three wells were incubated with the control (polychromatic) irradiated water, followed by three wells of violet, three of indigo, and three of blue in the 1st row of the plate. The second row was incubated with four wells each of green, yellow, orange, and red irradiated waters.
To further characterize the specificity of the reaction, 2 ml of urine was mixed with an equal volume of irradiated water and incubated in a test-tube for seven days at room temperature. The contents were then transferred to cuvettes to determine the absorbency profile at different wavelengths. Healthy male (N=10; median age 33 years) and female volunteers (N=10; median age 36 years) chosen from laboratory and hospital personnel to act as the control group. Normal reactions did not undergo serum PSA evaluation. The urine test using yellow irradiated water observed no detectable color reaction for both the male and female volunteers, except for one male. This individual, who had no disease symptoms, was followed up with a serum PSA test, which was determined as 3.3 ng/ml. We, therefore, excluded this individual from the study.

Serum PSA was measured with the Hybritech Tandem-R monoclonal radioimmunoassay. This assay was done by an independent urology lab. The results of the urine test were compared with the PSA test. The PSA distribution was arranged in the following categories: <0.1, 0.1-0.2, 0.21-4.0, 4.1-10.0, >10.0 (Table 1).

Table 1. Distribution profile of the urine test with PSA measurements.

The average pH of the urines collected and tested was 6.0-6.8. The exposed water had an average pH of 7.0. We wanted to stay within 1 pH unit for the urine test so as to collect data which is not attributed to pH fluctuations. There were two males with PSA 0.21-4 ng/ml whose pH value did not lie between 6.0 and 6.8 that were excluded from the study.
In Figure 1, there is a clear-cut difference between the control (polychromatic irradiated) water and the yellow-filtered irradiated water. Two rows with a positive test corresponding to a darkening of the pigmentation of the urine are in second row. A negative test of the urine is shown in the lower portion of Figure 1. There is some staining that occurs in other than yellow irradiated water as shown in the two strips. The difference in staining between the first 3 wells of the row for each subject and the yellow irradiated water is distinctly different. This test represents only a macroscopic test result as seen by the naked eye.
The observations made in the presence of the control-irradiated water were compared with water exposed to sunlight through different colored cellophane papers; i.e., the polychromatically irradiated water was used as a blank for the spectrophotometer reading. Figure 2 is a representative distribution profile of a reaction between urine and different irradiated waters. There are two peaks and one valley in the absorbency profile. The peaks occur at 397 nm and 454 nm. The valley occurs at 418 nm. Peak at 454 nm corresponds to a reaction specifically between yellow-filtered irradiated water and urine. The urine from normal volunteer gave the same reaction as the control i.e., there was no increase in absorbance at 454 nm implying that a positive reaction with yellow-irradiated energized water is specific.
The positive patient urine tests were then compared with their PSA readings. The results of the PSA readings were arbitrarily divided into five categories as follows: <0.1; 0.1-0.20; 0.21-4.0; 4.0-10.0; and >10.1 ng/ml. A positive urine test was observed in forty-five patients. The majority of positive patients (25 of 45) had a PSA level of 0.21-4.0 ng/ml. Twelve out of 45 had a PSA value <0.21, and six of 45 were above the 4.0-ng/ml level. There were 2 (out of 45) false-positive tests indicated by a negative PSA reading. In the same range of 0.21-4.0 ng/ml PSA, there were 27 out of 52 false-negative tests. 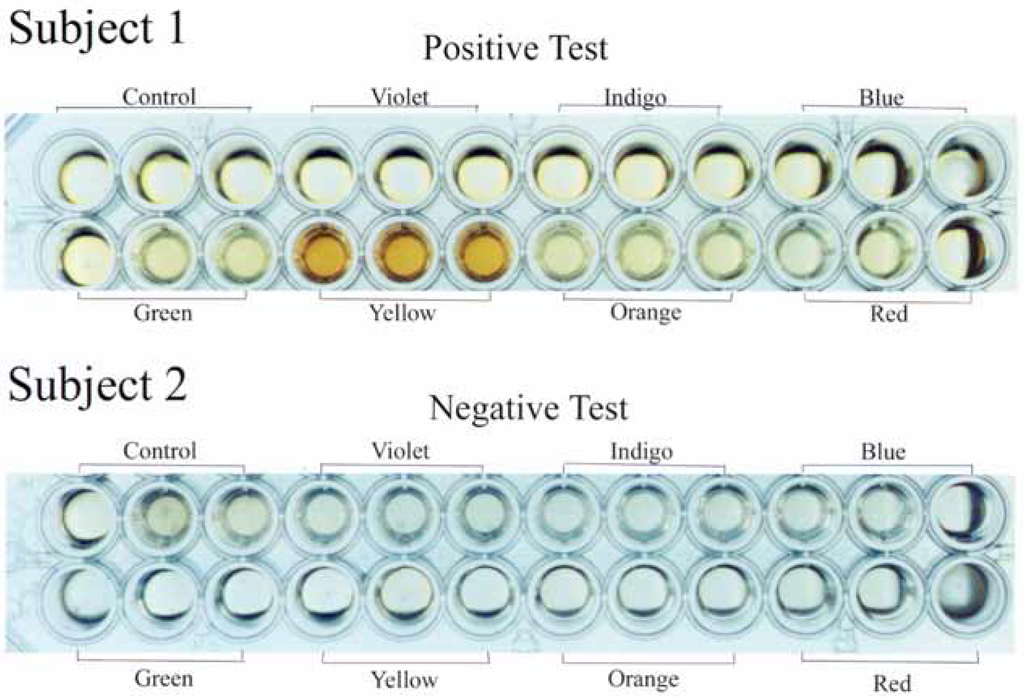 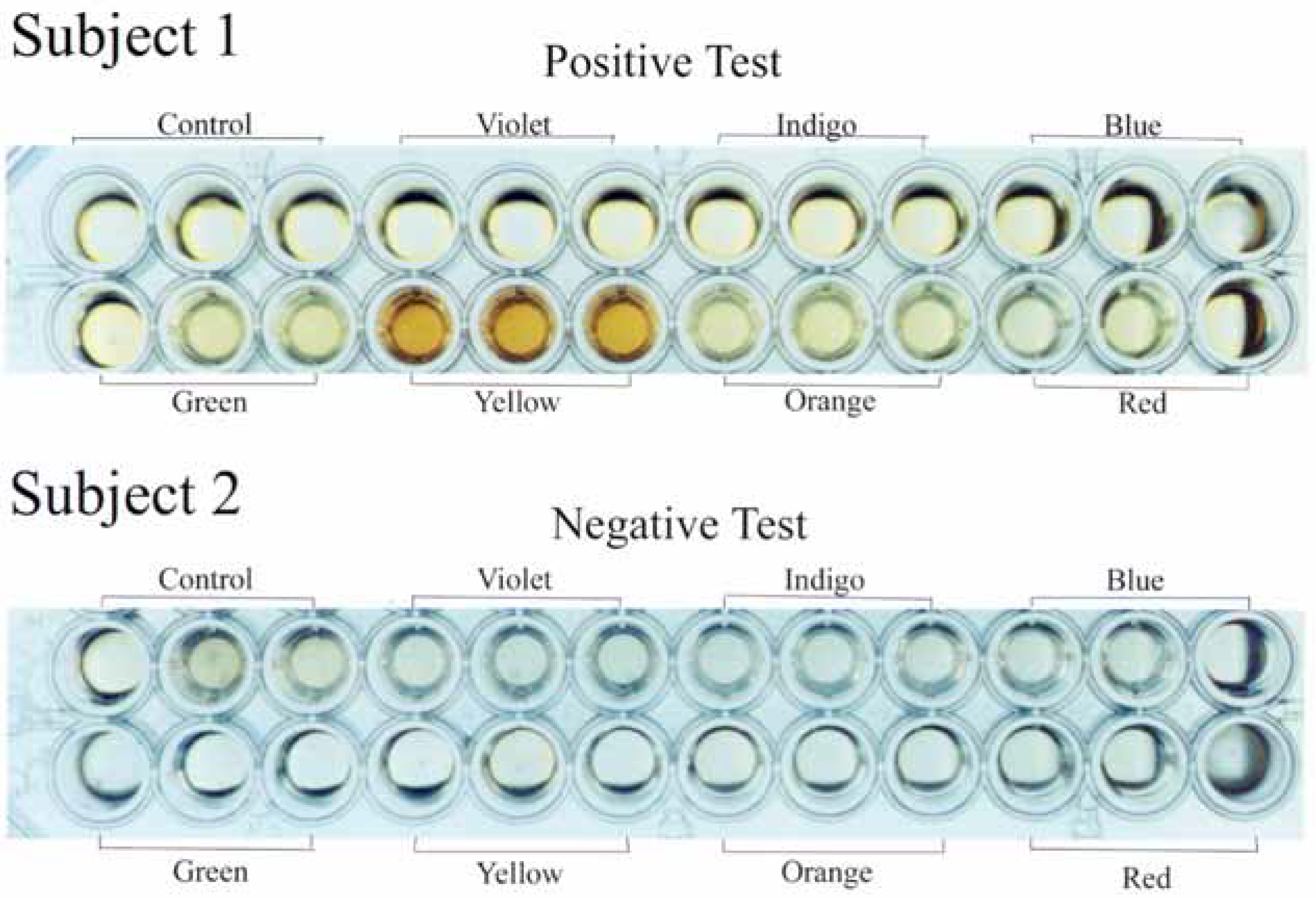 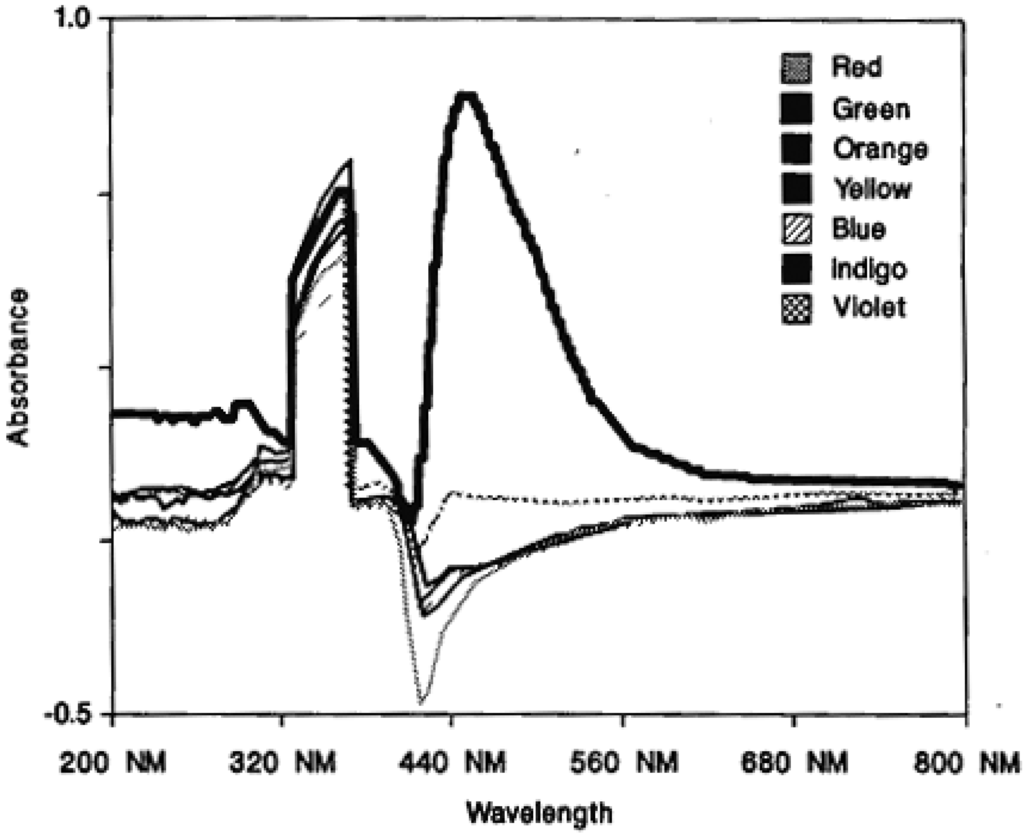 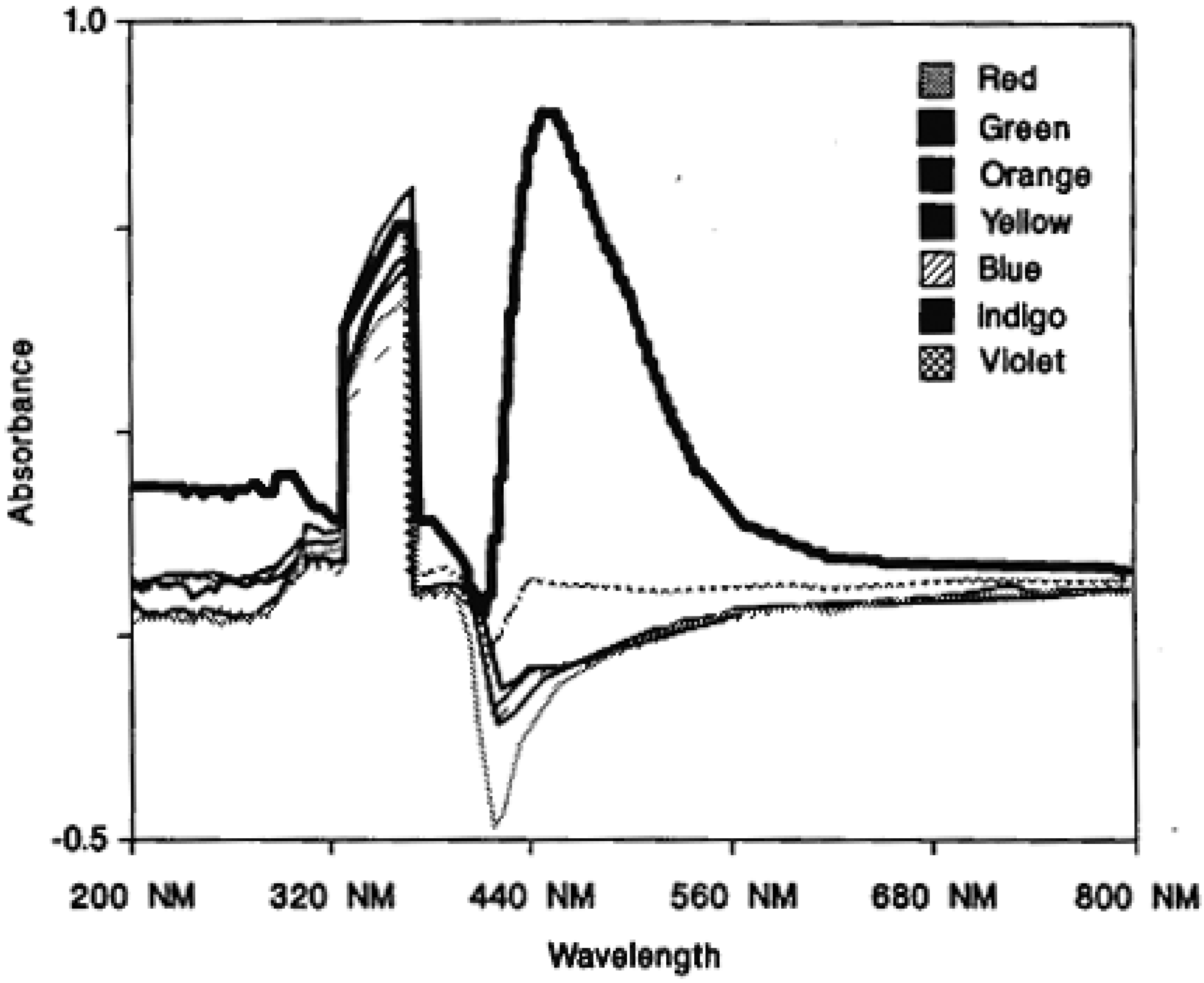 We thank Cindy Lovell for editing the manuscript.