Quantum Chemical and FTIR Spectroscopic Studies on the Linkage Isomerism of Carbon Monoxide in Alkali-Metal-Exchanged Zeolites: A Review of Current Research
Previous Article in Journal

Chromatographic methods have frequently been applied in the determination of relative partition coefficients (P) for use in quantitative relationships between chemical structure and biological activity (QSAR) [1]. Reverse phase thin layer chromatography and high performance liquid chromatography are used to evaluate the lipophilicity of a series of organic compounds. These correlations are based on the studies of Dearden [2], Consdem [3] and Martin and Synge [4] on the relationship between chromatographic distribution and the partition coefficient. The correlation which involves Rm is defined by equation 1 [5]:
Rm = log (1/Rf - 1)
They demonstrated experimentally that the relationship predicted by Martin and Synge [4] was indicated for a number of flavones, anthocyanines and some reference compounds. However, because of the nature of the substituents studied (e.g. hydroxyl groups), the data necessarily were restricted to a narrow range of compounds. Therefore, they analyzed the effect of substituents on the Rf value of an unsubstituted compound.
According to Tomlinson [6], the partition coefficient can be defined as an equilibrium constant similar to equation 2.
P = Ka / Kb
and ΔRm is similar to π. Many times the term ΔRm is ignored and π is expressed as: In the study of the structural characteristics of compounds active against the fungus Podosphaera leucotricha using regression analysis, they examined the relationship between the fungicidal activities of a series of alkyldinitrophenols and the ΔRm values of the substituents. The Rm values were measured in cellulose layers impregnated with 10% ethyl oleate using 60% aqueous ethanol as the mobile phase. A quadratic relationship was found for a series of 4-(1-cyclopentyl-n-akyl)-2,6-dinitrophenols [5] (Equation 4).
log Br = 7,583 - 11,815 ΔRm + 6,434 (ΔRm)2
Later, Draber et al. [7] studied the herbicidal activity of some triazinones. They demonstrated that the ΔRm constants of the substituents, obtained from measured Rm values in a reverse phase thin layer chromatography (RPTLC) system with the chromatographic solvent pair — paraffin oil and water/dioxane — together with its π values, correlate satisfactorily with its ability to inhibit electron transport in isolated chloroplasts.
Tomlinson [6] determined the Rm values for acids and bases. In this case, Rm was described by the following expression, stipulating that the degree of association in the organic phase can be ignored: where Ka is the dissociation constant of the solute and [H+] it is the hydrogen ion concentration in the mobile phase. Iwasa et al. [8] suggested the usefulness of the chromatographic data for QSAR. According to them, the relationship between the partition coefficient and Rm values constitutes an extension of the Collander equation [9,10]. that correlates the log P values in octanol/water with those obtained in other apolar/polar solvent pairs. Thus, the following equation was formulated:
log P = bRm + a
where a and b are constants. Also, Hulshoff and Perrim [11,12] emphasized the study of the classification and of the system model, through which the values of Rm can be measured.
In measuring of the Rm values by reverse phase chromatographic methods, the systems are generally constituted of sílica gel impregnated with a lipophilic phase (liquid paraffin, mineral oil, n-octanol) or chemically bound (C-8, C18) and an aqueous mobile phase of variable composition and polarity. Due to the nature of some of the solutes studied, an increase or decrease in the polarity of the mobile phase is generally necessary to obtain a reasonable migration of the solute and to obtain measurable values of Rf [13].
Boyce and Milborrow [14] have also demonstrated linear relationships between the Rm values and the number of methylene groups in the alkyl chain in a series of N-alkyltriethylamines in an aqueous-acetone system. This fact was related to the work of Irsherwood [15] which correlated the water content of the mobile phase with the Rm values of oligosaccharides. Such evidence showed that the composition of the mobile phase can significantly affect Rm and ΔRm data measured in similar. Biagi and coworkers [16] mention Rm data for values found by extrapolation of the curve obtained for the percent of acetone in an aqueous acetone mixture versus Rm. These values of Rm corresponding to a system containing 100% water can them be used for any QSAR model. Such an extrapolation is generally valid when Rm varies linearly with the fraction of volume of the organic solvent in the aqueous mobile phase, as represented by the equation of Soczewinski – Wachtmeister [17].
Rm = Rmw + bc
where Rmw is the value of Rm for an mobile phase containing pure water, b is a constant and c represents the concentration of the organic modifier in the mobile phase.
To measure log P by the conventional Shake-flask method is difficult and time consuming. It is difficult to determine log P for substances that are not very soluble in water or that cannot be detected by conventional methods. Instead of measuring the log P values by equilibrium methods, partition chromatography data can be used. The main advantages of the chromatographic methods over the direct partition methods for determining the hydrophobicity index consists of the fact that the former are simpler to use, are faster and less tedious [6]. In addition, less material is required and these methods can be used to determine the hydrophobicity of drug molecules with very high or very low log P values (such solutes require long equilibration periods in the normal Shake-flask methods), the material doesn't need to be ultra pure; there is no need to make a specific quantitative analysis of the solute and more satisfactory results are obtained.
Based on these facts, the objective of the present study was the determination of the chromatographic parameters of three series of sulfur containing alkylamines — aminoalkanethiosulfuric acids (1), aminoalkyl disulfides (2) and mercaptoalkanamines (3) — using a reverse phase system to find satisfactory correlations for the lipophilicity by extrapolation of the values of Rm. These data are compared with those obtained by the shake flask technique which is used in the determination of the partition coefficient. 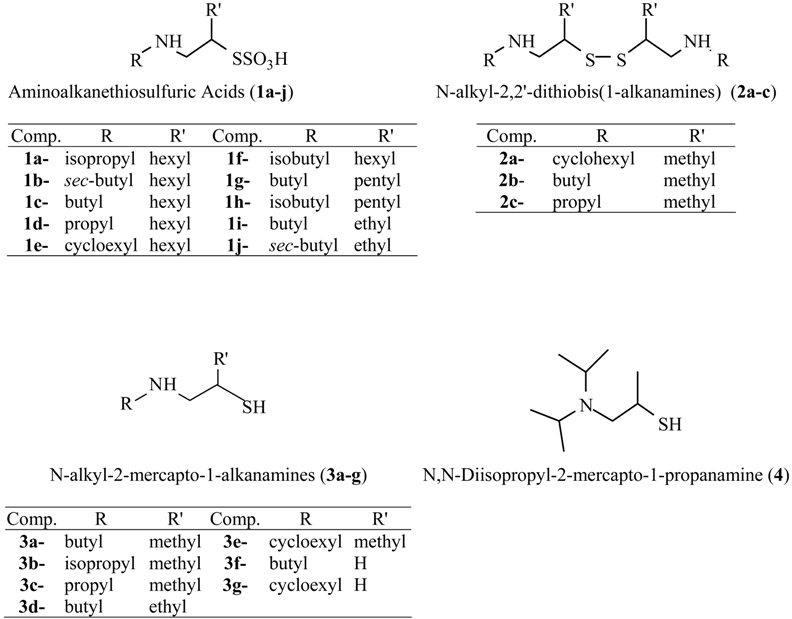 The compounds studied were synthesized in this laboratory by previously established methods [18,19,20,21] and their structures were established by physical and spectroscopic techniques (infrared, nuclear magnetic resonance and mass spectrometry).

Glass plates (10 x 10 cm) were coated with a 0.25 mm layer of silica gel DGF-254 (Merck). The plates were activated for 5 h at 110 oC, and, after cooling in a dessicator, were placed in a closed chromatography chamber in contact with a solution 5% of octanol in chloroform for 18 h to impregnate them with the reverse phase [13].
Individual solutions containing 0.3 mg/ml of each of the 21 derivatives in methanol were applied to the chromatographic plates. The mobile phase was composed of binary mixtures of 0.2 M ammonium acetate buffer (pH 6,0) and methanol in the following proportions 50:50; 60:40; 70:30; 80:20; 90:10. The plates were developed at 25 oC. After the mobile phase had migrated for a distance of 8.5 cm, the plates were removed from the chambers and the solvent was evaporated. The spots were visualized with iodine vapor and the Rf values were determined. From the average of the results from three plates. From the Rf, values, the Rm values could be calculated from the following equation:
Rm = log (1/Rf-1)

To obtain the RmWOL values, the chromatographic parameter for the pure aqueous eluent the linear correlation of the Rm values versus the percent of organic solvent in the eluent was extrapolated to the 0% point. To guarantee the experimental efficiency in the sense of assuring the reproducibility of the results the Rf values obtained in the absence and in the presence of octanol were compared. These values are shown in Table 1.
The RmWOL values obtained with varying proportions of methanol in the eluent can be observed in Table 2. The correlation coefficient shown in Table 2 indicates that this is indeed a linear correlation, thus assuring that extrapolation will furnish the RmWOL value for the 100% aqueous eluent (Equation 9).
RmWOL = a (% methanol) + b

Table 1. Comparison of Rf values of 2-(N-alkylamino)-1-hexanethiosulfuric acids (R´ = hexyl) obtained on plates coated with silica gel with and without being impregnated with octanol. (Eluent: methanol: ammonium acetate buffer = 40:60, pH = 6.0).
The results obtained from reverse phase thin layer chromatography showed that the tested compounds did not migrate when the mobile phase was only composed of ammonium acetate buffer. The addition of the methanol was necessary to obtain longer migrations and, therefore, more reliable Rm values. The comparison of the Rm values versus the composition of the mobile phase showed a linear relationship. An increases of 10% of methanol in the eluent resulted in a decrease of 2.6 in the Rm values for substance 1a. The experimental data for the mobile phase containing 5% methanol were not used because, at this concentration, several compounds showed very small migrations, presenting, therefore, Rm values outside the limits of maximum precision. The RmWOL values are shown in Table 3 and Table 4, together with the log P values in the series of the compounds discussed above.

Table 3. RmWOL, log PAp* and log Pcalc** values for the alkylaminoalkanethiosulfuric acids [22,23,24].
*Determined by the shake-flask method.**Calculated from fragmental constants by the methods of Hansch and Leo and of Nys and Rekker

Table 4. RmWOL,, log PAp* and log Pcalc** values for the mercaptoalkanamines and aminoalkyl disulfides [22,23,24].
*Determined by the shake-flask method.**Calculated from fragmental constants by the methods of Hansch and Leo and of Nys and Rekker
The analysis of the quantitative structure-activity relationship of the series of aminoalkanethiosulfuric acids, mercaptoalkanamines and aminoalkyl disulfides lead to the following equations (calculated and observed values) [23].

The chromatographic values of the three series of sulfur-containing amines – aminoalkanethiosulfuric acids, mecaptoalkanamines and aminoalkyl disulfides were determined by reverse phase thin layer chromatography. A satisfactory correlation with other methods was found when the extrapolated values of Rm were used. Thus, this technique can be used in place of more tedious methods for these classes of compounds.