Reduction of Nitroaromatic Compounds on the Surface of Metallic Iron: Quantum Chemical Study

Among Synthetic, Supramolecular and Theoretical Chemistry Stabilization of Short-lived Species in “Molecular’ or ‘Supramolecular Flasks’

Supramolecular chemistry is a new interdisciplinary border area situated among chemistry, physics, biology and technology. Although there is no precise definition of this field, it rapidly develops making use of new concepts of molecular and chiral recognition, self-assembly, self-organization and preorganization as well as cooperativity stimulating exciting development [1]. It is well-known that the formation of a supramolecular complex changes the properties of its constituent parts. The most spectacular examples of this phenomenon are represented, probably, by the existence of a single nitrogen atom [2] or noble gas molecule [3] in a fullerene cage and by alkalides and electrides [4] created due to the high affinity of crown ethers to alkali metal cations. As a result, the highly unusual alkali metal anion is obtained. Another manifestation of spectacular modifications of the guest properties upon the complex formation are recent syntheses of short living species that are stabilized inside 'molecular flasks'. The synthesis of cyclobutadiene 1 in hemicarcerand 2 by the Cram group [5] marked the beginning. According to Cram and coworkers, "Cyclobutadiene, (CH)4, is the Mona Lisa of organic chemistry in its ability to elicit wonder, stimulate the imagination, and challenge interpretive instincts. No other organic compound combines such a fleeting existence and so many different syntheses, with such a propensity for different chemical reactions, and with the variety of calculations of its structure". Its existence was proved but no detailed experimental studies of its structure and properties could be carried out in view of its rapid decomposition [6,7]. A key compound to test criteria and theories of aromaticity, 1 was studied so often that a leading chemist in this field expressed the opinion that it belongs to "now secured textbook material" [8]. Against all odds, cyclobutadiene obtained in the hemicarcerand molecular flask 2 was found to be remarkably stable for months at room temperature. The reaction consisted in the photoisomerization and fragmentation of ∀-pyrone originally proposed by Corey [9] (Scheme 1). The resulting cyclobutadiene was proved to be in a singlet ground state and to rotate rapidly in the hemicarcerand flask. When kept in oxygen-free atmosphere, 1 is stable at room temperature for months. Cram and coworkers claimed that the "inner phase" of carcerands and hemicarcerands can be regarded as "a new phase of matter" essentially different from the inside phases of clathrates and zeolites since "one host molecule provides one discrete molecular inner phase not depending on the bulk phase. Chemical reactions carried out in such phases could enable one to obtain and study many highly reactive species containing bent acetylene, allenic, or aromatic rings, radical carbenes, etc. The achievement of synthesizing cyclobutadiene was recognized soon by a Highlight note in Angewandte Chemie [10] and stimulated vigorous research of this species focused mainly on its antiaromaticity, [11] the mechanism of its tautomerization, [12] the Jahn-Teller effect [13] and its exotic analogues [14]. However, only recently the syntheses of new short-lived species have been reported. 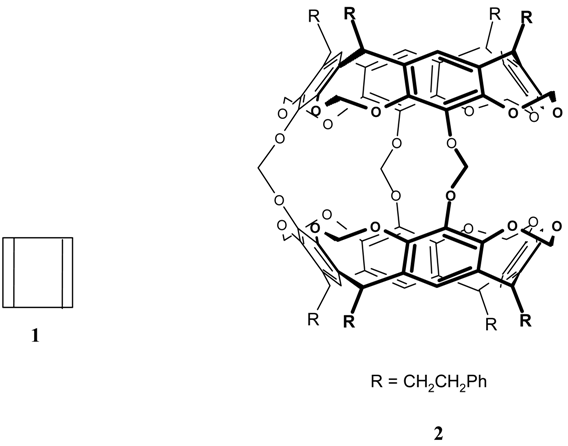 In 1997 Warmuth succeeded in an exciting synthesis of a cyclic compound 3 in hemicarcerand 4 according to Scheme 2 [15]. 3@4 was prepared photochemically at 77 K in a solution in deuterated THF. During its warming the highly unstable guest [16] undergoes [4+2] Diels-Alder reaction with the host [17] resulting in cycloaddition product 5. Interestingly, on the basis of NMR spectra Warmuth was not able to decide whether the compound he obtained had an o-benzyne 3a or allene 3b structure [15]. The dilemma was solved on the basis of high-level ab initio calculations: the calculated structure was closer to that of o-benzyne 3a [18].
A recent achievement in this domain is the synthesis of highly unstable 1,3,5,6-cycloheptatetraene 6a [19] in the hemicarcerand flask 7 by Warmuth and Marvel [20] presented in Scheme 4. Interestingly, the authors took advantage of a small isotope effect to slow down a competitive reaction yielding the insertion product 8. In this case the authors succeeded in assigning 6a not radical 6b (for which a triplet ground state is expected) structure to the product. 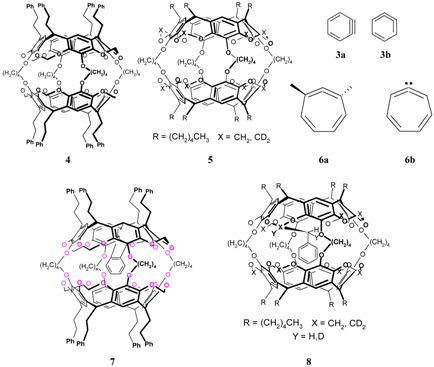 Hemicarcerand 2 played the role of a molecular flask in the syntheses and stabilization of the short-lived hydrocarbon molecules 2, 3, 6. The syntheses of the chiral and somewhat hydrophilic hemicarcerands 9 [21] and of the water-soluble hemicarceplex 10 [22] pave the way for the synthesis of chiral and polar short-lived species.
Another milestone in the domain of the synthesis and stabilization of unstable intermediate species in ‘molecular flasks’ was set by Kusukawa, Fujita and coworkers [23] who recently reported the preparation of two cyclic trimers of siloxanes 11 (R = Ar, xylyl) in the self-assembled cage 12. Cyclic oligomers of trisilanols 11 and 13 are considered to be short-lived intermediates in the polycondensation of trialkoxysilanes leading to the creation of siloxane networks or ladder polymers. [24] The obtaining of these oligomers is essential not only for understanding of the condensation process but also for future development of novel silicon-based functional materials. The tetramer 13 is a stable species [24] while the cyclic trimers 11 as kinetic short-lived species remained elusive since they rapidly converted to the thermodynamically favored tetramer and condensation products [24] unless, recently, they were confined to the cage 11 [23]. In 11, cyclic trimers 12 (R = Ar, xylyl) remained remarkably stable for 1 month in water at room temperature. They even ‘survived’ acidic conditions (pH < 1) necessary for the isolation of the encapsulated complex.
Recently, the Raymond group from the University of California at Berkeley reported a synthesis of the unstable cation 14 in the cage 15 [25]. 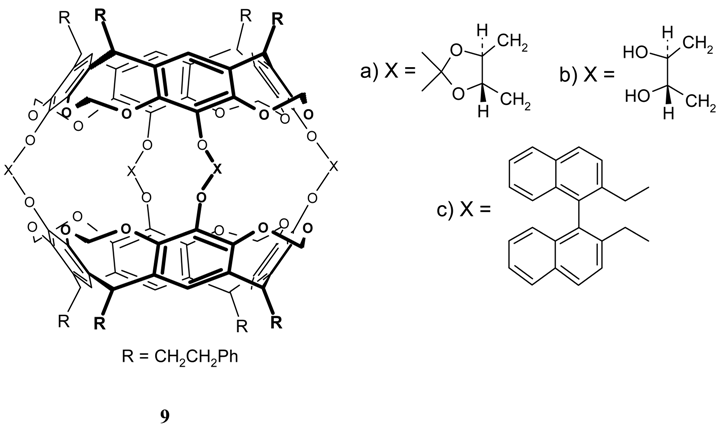 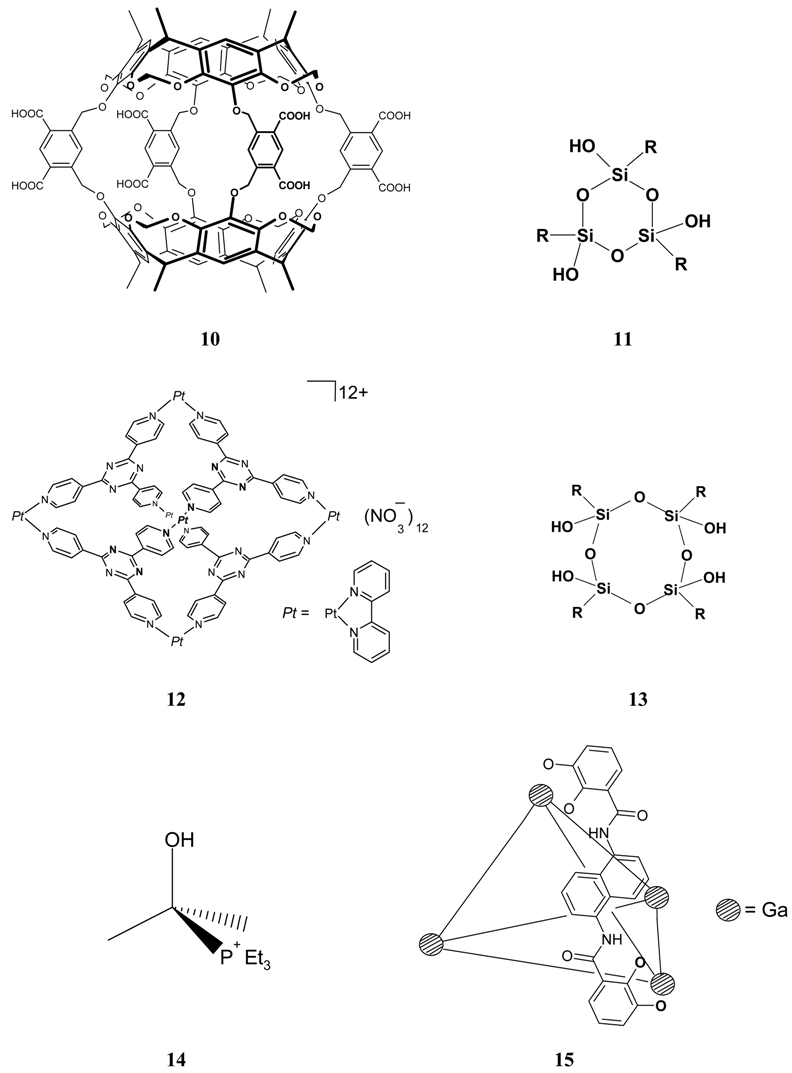 Only few reactions in "molecular flasks" have been described in literature but they clearly mark the beginning of an exciting development in the border area among organic, supramolecular and theoretical chemistry. Numerous unusual molecules that have been recently proposed as plausible synthetic targets [26] on the basis of quantum calculations may be only short-lived species. Tetrahedrane 16 (of which only two derivatives are known) [27] and its truncated analog 17 [28], bowlane with a pyramidal carbon atom 18 [29], dimethylspiro[2.2]octaplane 19 with a planar carbon atom developed on its basis [30], tricycloheptane 20 having a bond angle, formed by three tetracoordinated carbon atoms, of 1800 [31], [1.1.1]geminane 21 with inverted carbon atoms [32], fused bicubane 22 [33], silacyclopropyne 23 known as matrix-isolated species [34] with C/C-Si angle close to 60o, the recently reported smallest fullerene C20 24 [35] and noble gas compounds like HArF [36] (recently detected by spectroscopic techniques below 27K) to name but a few, may prove to be not only feasible but also stable inside molecular capsules that force close contacts of reagents and may even catalyze the synthesis on one hand and protect the product from decomposition on the other. Such prospects will undoubtedly trigger further computational studies of nonstandard species. On the other hand, the enabling of the capture of short-lived intermediates will beyond question give an impetus to the studies of reaction mechanisms. 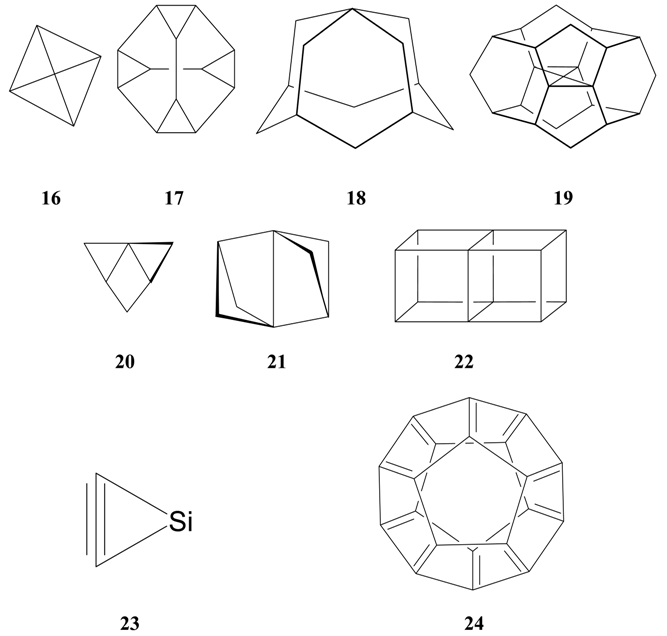 The reactions in “molecular or supramolecular flasks” can stabilize not only molecules in the singlet ground state but also carbenes that are usually transient intermediates [37] thus making possible not only studies of these elusive species but also allowing one to get a deeper insight into the mechanism of the reactions involved. The molecules 1, 3a, 6a, 10 are symmetrical, aesthetically pleasing systems. So are the hypothetical 16–22 awaiting their syntheses? The possibility of carrying out chemical reactions in molecular or supramolecular flasks is a meeting ground of organic, supramolecular and quantum chemistry that can enrich all these areas.